A Forever Timber Home in Tennessee

Tennessee newlyweds build a forever love — and a forever timber home — together. 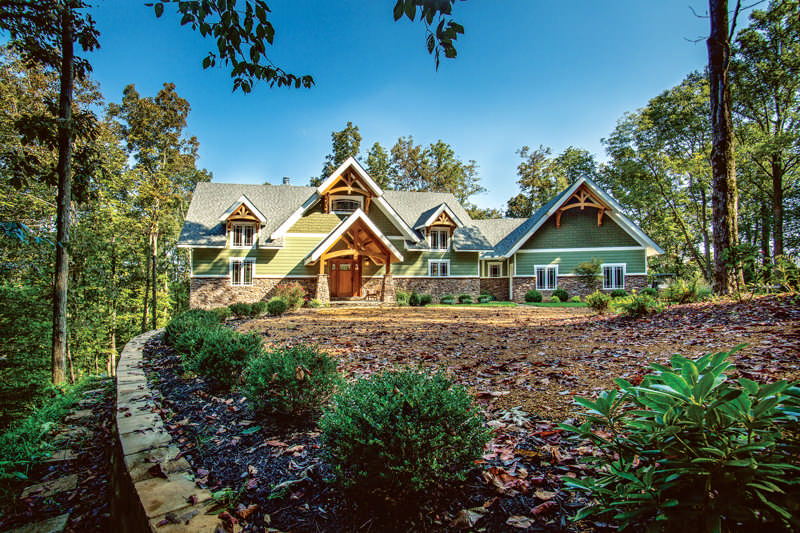 When Robert Norfleet first laid eyes on his now-wife Louise, he knew they were a match made in heaven. He proposed marriage atop a wooded knoll on 150-acres of family property in Manchester, Tennessee — the same piece of land on which he already had plans to build his first timber home. 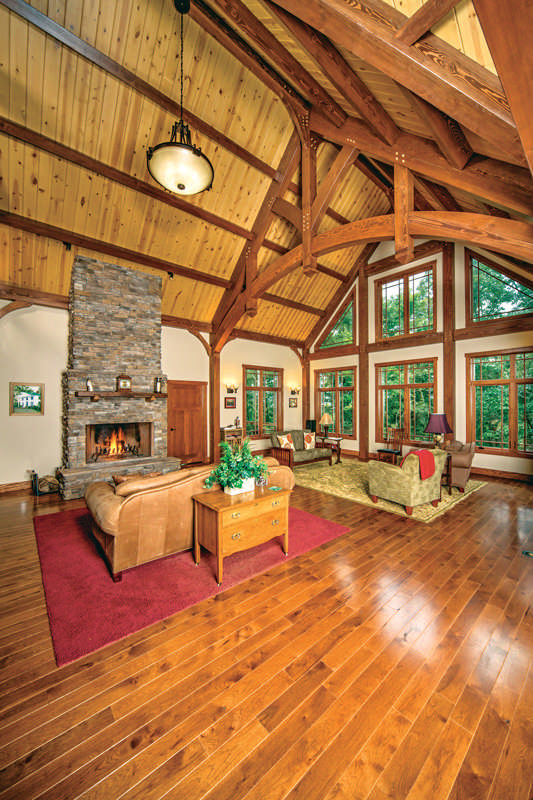 Louise agreed she and Robert were meant to be, but her feelings about what would become their full-time residence? Those were a different story. “There were just some things in the plan that didn’t work for me,” she says. “The laundry was on the lower level, for example.”


Together, the couple decided to relocate the home to the same hilltop perch where they were engaged and more changes quickly followed. “Once we chose a new site, we needed to redesign the house completely, so we started from scratch,” Louise says. The updated plan called for three levels and 4,450 square feet of space to accommodate the couple and their frequent visitors. “If she had said ‘No,’ I would have ended up with a much smaller house,” Robert quips.

The only thing that didn’t change in the design: the timber frame element. “Over the years, I had seen and fallen in love with the mortise-and-tenon construction and had always wanted to build a timber structure,” Robert explains. The couple teamed up with Bruce Bode, the national sales and design manager of Heavy Timber Truss & Frame, to create their new hybrid home, a mixture of timber framing and SIPs (structural insulated panels).

Keeping functionality at the forefront of their plan, the project centered on a single-floor living space, which included a master bedroom on the main level in addition to a garage, pantry, laundry room and mudroom. “This is their forever home, so they wanted a structure that would adapt to their needs in the coming years,” explains Bode. 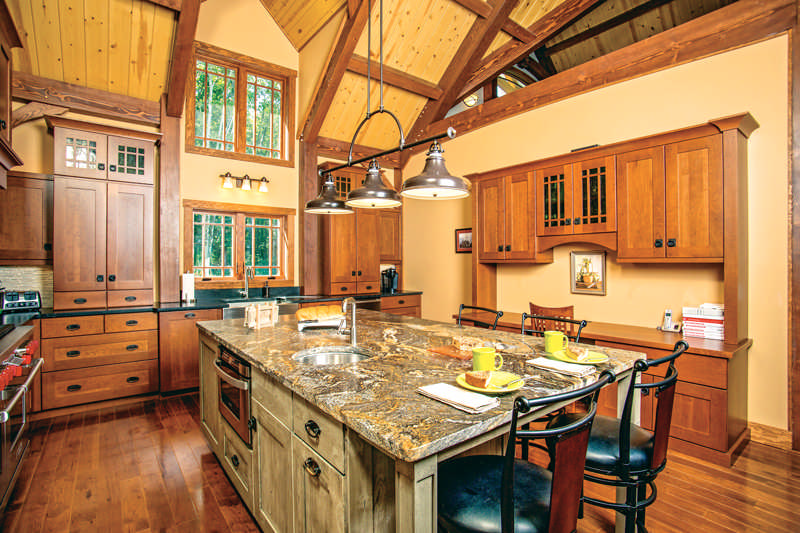 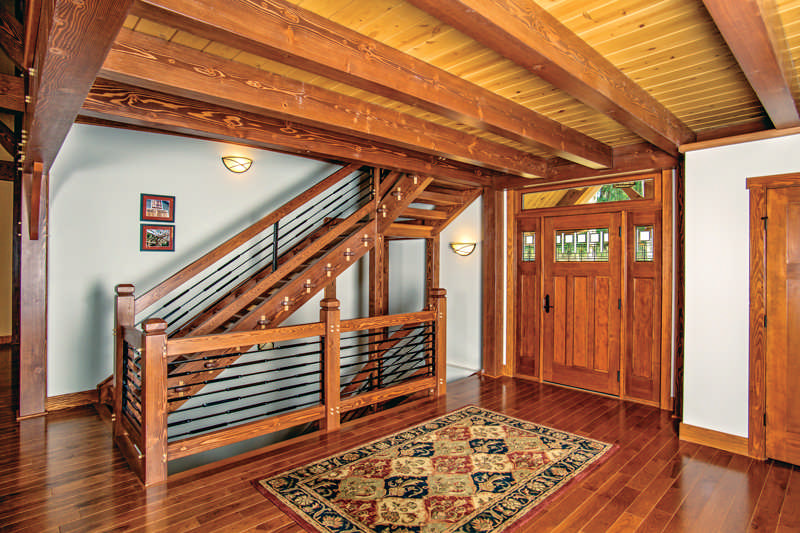 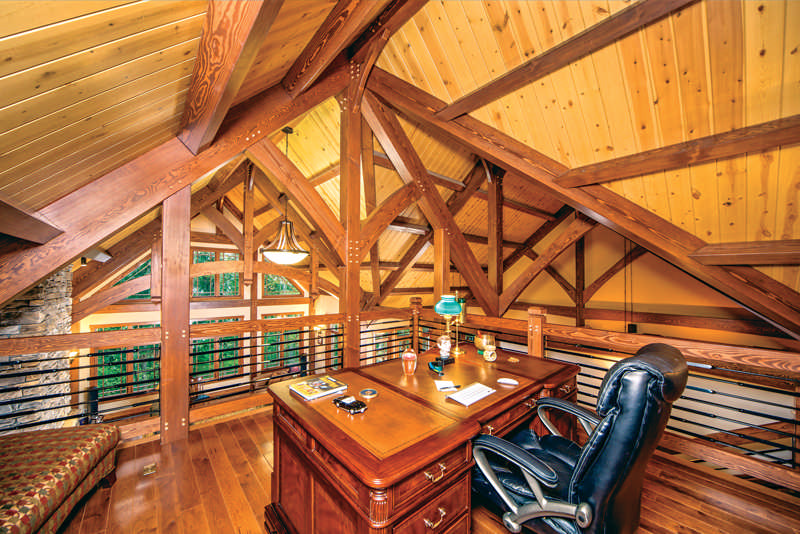 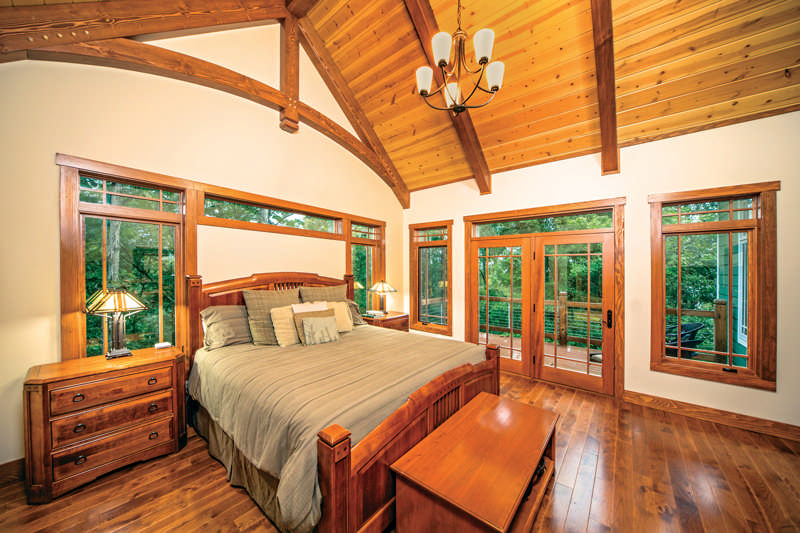 The homeowners also stressed to Bode the importance of an open, welcoming feel on each of the three levels. On the main floor, a great room combines the living room, kitchen and dining area into one. 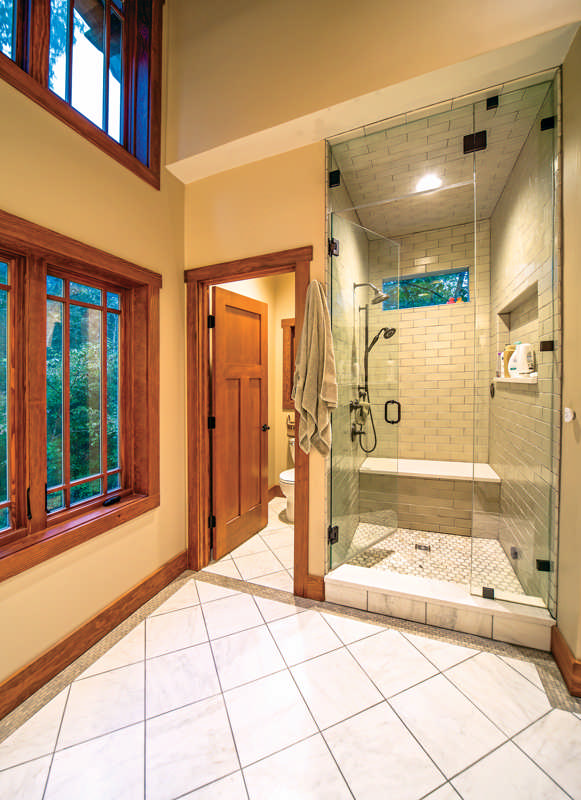 An open timber stairway stretches up to an airy loft where Robert works from home and down to a walkout lower level that features two en suite bedrooms and a full apartment with ten-foot ceilings and loads of natural light.

“Seeing now how folks flow and use every inch of space and how they find all the spaces to be warm, connected and inviting is exactly what we hoped for,” Robert says. Much of the warmth that visitors find so welcoming comes from the thoughtful mix of natural interior materials — from kiln-dried timbers and locally-quarried stone to rustic furnishings made from trees felled on the property. “

The simple artisan look speaks to us,” Louise says. “We especially wanted to bring together a beautiful mixture of woods.” In the kitchen alone, hickory, knotty alder and cherry come together under a span of chestnut-colored Douglas Fir beams and honey-colored tongue-and- groove ceilings. In the great room and screened-in porch, timber walnut and oak mantles punctuate the stone fireplaces. “I proposed to her on the walnut log, so we turned it into a mantle,” explains Robert.

Some of the exterior elements are also rooted in nature — cedar trusses and gables lend character to the Craftsman-style façade — but the majority of the materials are man-made for easy maintenance. Pre-finished concrete lap siding and shingles, cultured stone and steel-clad windows and garage doors all fit into the no-fuss approach.

Because of the wide variety of materials used on both the interior and exterior of the home, Louise says the build was a learning process not just 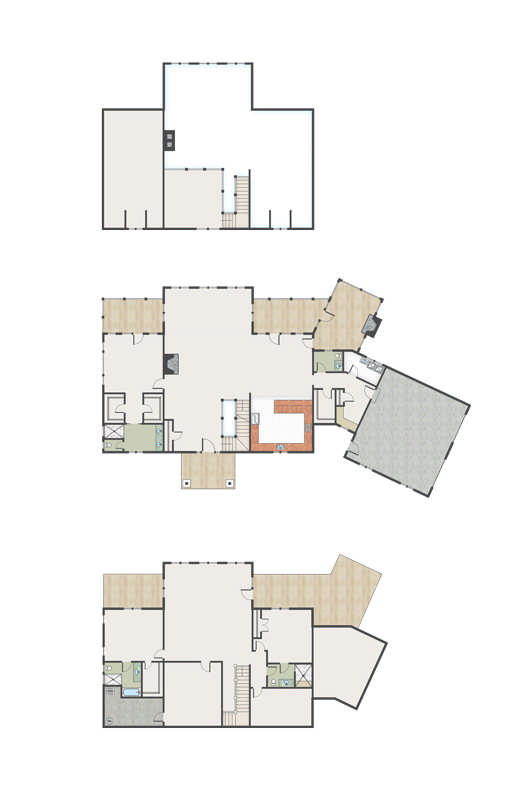 for her and Robert, but for much of the crew that helped construct the home alongside Bode’s team. “These were local guys that didn’t know a lot about timber frames, but we all went into this in the spirit of learning and creating something beautiful and are friends to this day,” Louise says.

Echoing her thoughts, Bode adds this fitting analogy: “Building this house, like building any new house, is like a marriage: you’re in it for the long haul so you enjoy the process and have some fun with it.”

Log Cabins: Past and Present
Shop now at Amazon.com