Dig into the world of timber frame homes with some essential terminology!

Photo: James Ray Spahn. See more of this home here.
You don’t have to be a timber-framing expert to be able to identify the various parts of your home’s structure, or to appreciate the unique beauty of its various components. Most owners quickly learn these terms because they take great pride in their homes, which are often composed of signature arrangements of posts, beams, trusses, embellishments and other framing options.


Where conventionally built homes usually contain thousands of individual wood parts, all of which disappear from sight as interior finished surfaces are applied, timber frame homes may contain fewer than 200 key structural components that remain visible to occupants when the home is complete. And although architecture evolves over time and frame designs may vary widely from one house to another, the technical names, or nomenclature, used to identify each of these critical components are unchanging, having been handed down by frame builders through the centuries. 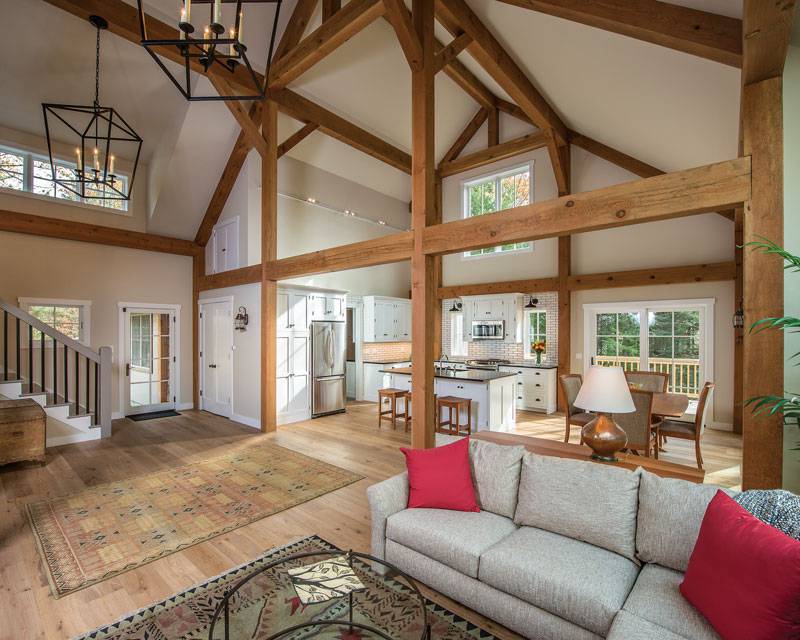 
BAY. For efficiency in both construction effort and material use, timber-frame structures are typically erected in boxlike sections, called bays, consisting of two bents (one on each end) along with additional frame members that connect the bents and form the structure.

BENT. Each bent forms an end-wall in a bay. Like individual slices in a bread loaf, bents extend completely through the structure from one end to the other, and from the foundation base to the topmost ridge, and serve as the major load-bearing assemblies in a timber frame. Bents are usually built flat on the ground or floor deck, then raised to their vertical position with a crane (or many willing hands).

CHAMFER. A 45-degree flat edge planed or routed along the outer, or “leading,” edges of a timber. Although chamfers are essentially decorative, they are often placed where occupants may come into contact with sharply cut, exposed timber angles and edges to prevent injury.

GREEN TIMBER. Wood used in timber framing is often built into a frame soon after it is cut, when it is still “green,” without any intermediate drying period. The joinery used in such a frame is designed to tighten and become stronger as this green wood dries and shrinks in the framework. Sometimes, timbers are air-dried in weather-protected enclosures to remove moisture and reduce them to nominal finished size, or kiln dried in a heated environment to almost furniture-grade condition.

RECLAIMED TIMBER. Wood that is salvaged intact from older timber-frame buildings such as barns, mills and factories, and is then reused or recycled into a new structure. Owners often pay a premium for the unique appearance and qualities of aged or “antique” timbers.

TIMBER. According to standard lumber classifications, a timber is a length of solid wood with a cross-section greater than five inches on a side. Mill construction, a designation for fire code requirements, calls for structural timbers cut to a minimum of eight inches per side. Timbers are used interchangeably as both posts and beams in timber-frame buildings.

TRUNNEL. A large wood dowel or peg used as a fastener in wood joinery. The word is derived from the descriptive term “tree nail.” Depending on the builder or owner’s prerogatives, the exposed pegs are either cut off flat to the face of the timbers or remain uncut to extend beyond for a more rustic look.

TRUSS. An arrangement of horizontal and vertical timbers used to support a roof, upper floor or balcony. A truss combines and multiplies the weight-bearing strength of its individual timbers, allowing the assembly to span a greater unsupported area and carry heavier loads. Various types of roof truss designs are available, including hammer beam and scissor trusses.

BRACE. Variously called knee braces, angle braces or wind braces, these short, diagonally positioned timber supports are used as reinforcement in the corners of a frame to prevent shear, or horizontal movement.

GIRT. This critical frame component forms a horizontal band, or “girdle,” completely around a timber frame. Often referred to as a girder, bent girt or girding beam, it also serves as the base, or sill, for each upper floor and is frequently used as the outer support beam for individual floor joists.

GUNSTOCK POST. Also known as a jowled post, this unique vertical support is dimensionally wider at the top to enable it to form an intersection for multiple beams and support members.

HAMMER BEAM. An elaborate type of tie beam used in “open” or unconnected trusses, often in conjunction with a curved brace, which helps to transmit the weight of a structure’s roof to the walls.

JOIST. These horizontal beams simultaneously carry the weight of interior flooring and serve as room ceiling supports. Joists are supported by major horizontal support members such as girts and intermediary weight-bearing beams such as summer beams.

KING POST. This key timber forms the center point in a truss, or geometric support framework, and is often used as an intersection for other frame members. Although it is, technically speaking, a post, it is usually suspended from above and rarely extends to the floor of a structure.

PLATE. A beam that forms the horizontal base of the structure and serves as a foundation or attachment point for vertical frame members such as posts and walls.

PURLIN. The upper sections of timber-frame bents are often connected and reinforced horizontally by purlins, which also support the roof deck.

QUEEN POSTS. These vertical frame members are used in a truss configured with two symmetrical posts instead of, or in addition to, a single king post.

RAFTER. Roof-support timbers that extend upward, from the wall plate to the topmost ridge beam, are called rafters. Rafters and purlins are sometimes used in combination. Principal rafters form the sloping gable roof- line on each bent.

RIDGE. This horizontal member, otherwise known as a ridge beam or ridge plate, connects the bents at the apex of a timber-frame gable. Ridge beams are not always required and may be omitted in some structures.

SUMMER BEAM. Sometimes referred to as a center girt, this beam is typically used to span large open areas and support the weight of other beams, such as joists at the center of a floor. Because it is required to bear considerable weight, it is often the single largest wood component in a timber-frame structure.

TIE BEAM. An auxiliary frame member, also known as a collar tie, it is installed horizontally between roof rafters to prevent a roof from spreading apart because of structural (weight) loading.

BIRDSMOUTH. A complex cut made at the tail end, or bottom, of a rafter that allows the timber to extend over and past the wall top plate, providing a greater bearing and attachment surface.

BUTT. One of the least complicated joints, in which mating pieces are square-cut and simply butted against one another. Because this joint has little inherent strength and depends on gravity or fasteners to remain in place, it is typically limited to intersections that are not subject to movement or strong opposing forces, such as where timber posts rest atop horizontal beams.

DOVETAIL. A commonly used joint that includes a fan-shaped tusk or tenon that drops into and interlocks in a similarly shaped pocket cut. The wedge-like shape of this extremely strong joint prevents the interlocked timbers from shifting or separating from one another.

LAP. A joint in which the ends of two timbers are cut at matching angles and simply overlaid, or “overlapped,” then fastened to each other. Because the wood grain direction of the mating pieces is parallel, these joints are easily concealed and often invisible. Lap joints are typically used to extend, or lengthen, timbers in long horizontal runs.

MORTISE & TENON. A frequently used joint in timber framing, it includes a male end (tenon) cut onto the end of one timber that fits into a square-cut matching female receptacle (mortise). Like many timber frame joints, it is often locked in place by the addition of hardwood dowels, or pegs, called trunnels (“tree nails”).

POCKET CUT. Similar to a mortise, this joint receptacle typically is “open” in two dimensions; cut into the side or top face of a timber, it is designed to receive an identically shaped tenon or tusk formed at the end of a mating timber.

STEP-LAPPED RAFTER SEAT. An improved type of birdsmouth and overlapping joint, it typically includes complimentary cuts in the rafter and plate to resist downward and outward thrust, as well as side-to-side movement.

SPLINE. A long, relatively thin wood section used to splice two timbers or reinforce a joint. The spline is typically layered between the timbers and the assembly is fastened through with wood dowels.

SHOULDER. A ledge cut into the face of a joint; this added facet increases a beam’s load-carrying capacity by transferring downward force directly to the post while the joint’s tenon resists the lateral load, or tension.

THROUGH JOINT. A descriptive term used for joints in which a tenon or tusk passes completely through a mortise or pocket cut into the receiving timber.

TONGUE & FORK. A specialized joint often used to connect the upper ends of rafters that meet to form a peak, or gable. One timber end is cut in an open U-shaped configuration (the fork), and a single tongue formed on the intersecting timber closely fits into the space between the fork ends.

TUSK. A tenon-like extension formed at the end of a timber that fits into a matching mortise or pocket cut; this joint typically includes an additional shoulder or ledge cut into the outside face of the joint.

WEDGE. A wood shim inserted into a joint to tighten and lock the intersecting timbers in place.