The year-plus hybrid-timber-home journey is nearly over, and our couple has the finish line in their sights. To get there, they have to roll up their sleeves and get to work. 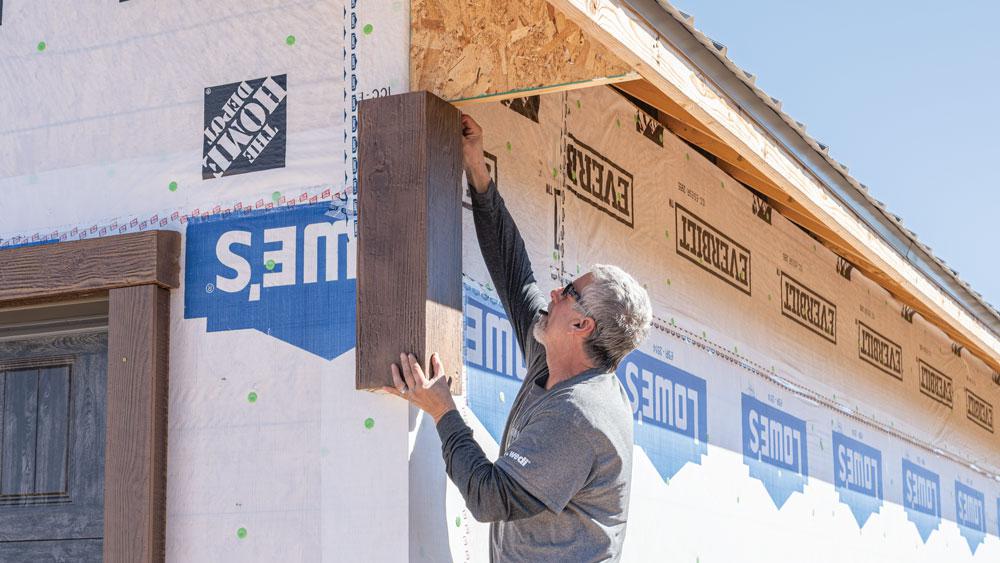 Photo: Mark Sorenson
If you’ve been following Peg McVay and Tony Stramm as they build their dream home atop their Cañon City, Colorado, outlook over the course of the past year, you may have noticed a recurring theme: DIY.
Once Timbercraft’s crew raised the timber frame, the couple has done the lion’s share of the construction completely on their own. With reasons ranging from global (pandemic) to individual (Tony’s past career as a contractor), their home base has been an RV parked on site under a pole barn. From there, they’ve invested hundreds of hours of sweat equity into their new forever home.
“We’re working on the mechanical room right now,” says Peg. “The last wall downstairs is drywall-clad. We’re putting the studs up and then we’ve got to run a light switch into it. Yesterday we were working on log siding outside. It was 60 degrees, so we’ve just been trying to hammer through and get it done because, today, the high is 30.”

Peg and Tony opted for concrete log siding for their hybrid timber home. It increases the R-value substantially while providing a rustic, mountain look. The PEX tubing under the main level helps distribute the home’s heat through the floor. The radiant floor heating system will keep the home cozy in the winter months.

With the guidance of a contractor friend, Tony installs the highly efficient water heating system.

Peg and Tony opted for concrete log siding for their hybrid timber home. It increases the R-value substantially while providing a rustic, mountain look.

While this sort of work was Tony’s profession for years, Peg, formerly a math teacher, relishes the opportunity to know her house inside and out. She learned that for every to-do on the list, there are at least three sub-objectives that need to be achieved. For example, one of their next projects is attaching the stone to their front bump-out. But before that can happen, they’ll need to trim out the windows.
For their radiant in-floor heating, they have to run all the PEX tubing under the floors and connect that to the boiler, which they also need to install themselves. For that aspect, they had a contractor friend double-check their work, because, according to the couple, a boiler is the last thing you want to mess up. “It reminds me of that song ...  the knee bone’s connected to the thigh bone …” says Peg with a laugh.
Speaking of all these features, doing the work themselves has allowed Peg and Tony to build faster and afford more upgrades than if they had been paying other people to do everything for them. “I would’ve had to teach for another year, if not two. One of our contractors’ son-in-law’s family just had an add-on that cost more than our entire house.”

During his career as a contractor, Tony specialized in kitchens and bathrooms, which is perfect as those are among the last things needed for the couple to finally earn their certificate of occupancy. The McVay/Stramm home is outfitted with zone temperature control. This was a priority for them as they wanted their guests to be comfortable. Plus, Peg was adamant: “I am NOT going to be cold in my own bathroom!”

In addition to cement-log siding on the exterior, a stone veneer was selected to encase the bump-out. Combined with composite decking the mixed materials give the Colorado home a dynamic, yet very low maintenance, facade.

During his career as a contractor, Tony specialized in kitchens and bathrooms, which is perfect as those are among the last things needed for the couple to finally earn their certificate of occupancy.

On top of that, whenever specialty installers come to the site, they inevitably try to steal Tony away for other jobs. “I’m like: ‘NO!’” cries Peg. “He has finish our house first. It’s hard to find labor right now, and if you can, you’re going to pay for it.”
For those considering adding sweat equity to their own home, Peg has some learned advice. First, know your limits. Many parts of home construction are a huge pain to undo if done incorrectly. For example, pouring your own concrete foundation: To fix that, you’d need a jackhammer.
Second, find someone reliable to give you solid local contacts, such as suppliers and contractors. Even trained homeowners like Tony can’t do everything themselves.
Third, try to live on or nearby your site. With supply shortages and increased materials costs, the theft rate at construction sites has skyrocketed. “I’m so thankful we are here, because we didn’t have to worry about that at all. Also, it was great not having to drive to the RV park we stayed at when we first started. It was only 20 minutes away, which doesn’t sound bad, but after you’ve worked all day, it’s a blessing to not have to drive to your bed.”
Having said that, Peg and Tony report that they are completely over that RV bed and are very ready to move into their new master suite. Once they attach the stone to the bump-out, the exterior will be complete and then it’s on to the drywall. Peg sighs: “Waking up here every morning though, it’s like … oh man, you really get to see what you’re fighting for. It’s just so beautiful here.”

Now that the home is nearly complete, we’re taking a pause to let Tony and Peg move in. Be sure to check out the finished and furnished home in the June/July issue of Log & Timber Home Living.  Until then, catch up on the series here on timberhomeliving.com