Lots of glass, nature-themed details and outdoor living areas make the most of this eye-popping Rocky Mountain setting.

At the rear, panels of glass fill the exterior of the house, from the walk-out lower level to the master bedroom porch. “Virtually every room in the house has a view,” says Ray. Arranging the living room so everyone could take advantage of the views, the mossy rock fireplace and the television took some clever planning. “We came up with a V-shape modular leather couch and leather swivel chairs so you can move around and face the view you want,” says Michelle.

The kitchen’s rich architectural character begins with the unique turret shape and continues with knotty alder cabinets, a granite backsplash with a mountain motif, copper accents and walnut flooring. Windows surround the home’s dining table, thanks to the room’s turret-like shape (a feature mirrored in the adjacent kitchen). Drywall painted a creamy white, recessed lighting and decorative metal spindles (rather than chunky wood ones) keep the staircase light and airy.

The master bedroom’s stone fireplace is accented with a mantel made from reclaimed barnwood, while French doors that open to a private porch keep the room connected to the great outdoors. In the master bathroom, tile walls and pebble flooring create a natural, spa-like vibe in the walk-in shower. Glass shower doors with an undulating top edge mimic the Rocky Mountains that lie beyond the home. Horizontal cable railings provide security without obscuring the views, while a movable bar cart keeps refreshments close at hand. An outdoor dining set crafted from logs provides a comfortable spot to take in the scenery. It’s one of the couple’s favorite spots to relax, when they’re not hiking or snowshoeing through the property with their pup, Petey.

Boulder artist Lueb Popoff’s carved woodland creatures are so lifelike, they may just give you a start when you see them. His process is meticulous – to ensure he does justice to an animal, he analyzes it from every angle — even studies its behavior in the wild: how it sits, how it moves, how it flies. Every notch he makes into the wood has purpose. He strives not only to bring out its looks, but its attitude. To see more of his work or commission a piece for yourself, visit hollowlogonline.com.

At the rear, panels of glass fill the exterior of the house, from the walk-out lower level to the master bedroom porch. “Virtually every room in the house has a view,” says Ray.

Written by Suzanna Logan
Photography by James Ray Spahn
It’s no secret to Ray and Michelle Clopton that their northern Colorado timber frame home is something special. “The first thing anyone says when they walk in is, ‘Wow!’” according to Michelle. “We even have delivery people ask if they can take pictures of it,” adds Ray with a chuckle.
But it’s not just the two-legged visitors that have the Cloptons convinced their home is extraordinary. Since moving into the home in 2018, the couple has had regular sightings of black bears, moose, deer and even cougars. “It’s an enchanted place,” says Ray.
In fact, it was their first trip up the mountain to visit the property that earned the house its nickname. “We came up to the property, and there was a big black bear just sitting on the road.” explains Ray. “It sort of lazily moved on, and that’s how we got the name of the property — ‘Sitting Bear Ridge.’” 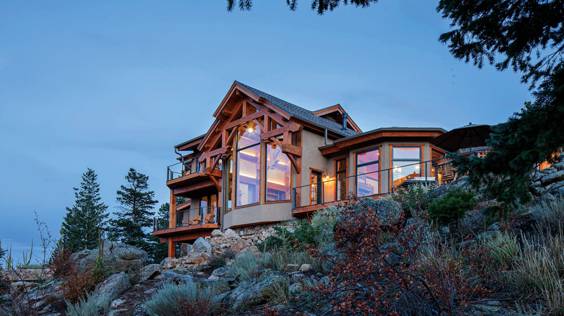 Perched high above a valley without another house in view, the home delivers unbeatable sight lines to towering trees and even bigger skies, and it was this unspoiled panorama that caused Ray and Michelle to take the timber home plunge. “We weren’t actively looking when we came across the property on Zillow, but those views won us over,” says Ray.
Having lived across the canyon for nearly two decades, they weren’t newcomers to the mountain life, but their transition was significant nonetheless. Besides trading their 2-acre plot for 70 acres, they took on their first custom-home build. “We went into it rather naively, thinking it wouldn’t cost that much money or take longer than six months,” admits Ray. (From closing on the property to move-in day, the process took about four years.) Michelle adds: “You go into it prepared to pick out things like the flooring and countertops, but you’re literally choosing every detail, down to the doorknobs.”
But if the devil is in the details, so is the divine. The ability to influence every design decision is exactly what makes the timber home with log accents so spectacular. 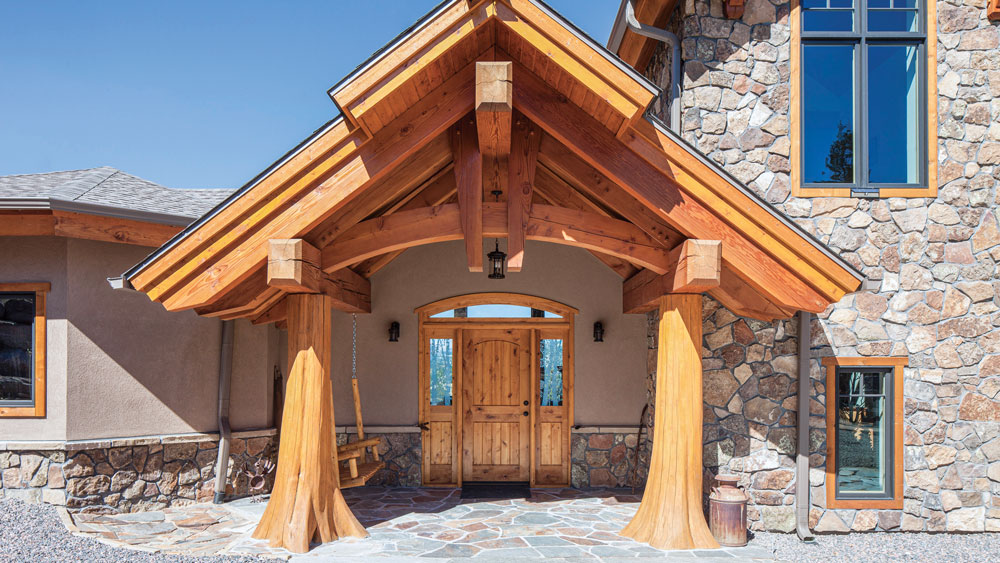 At the home’s entrance, a pair of massive, white cedar character posts stand sentinel, while the sidelights around the front door are etched with aspens, nodding to the state’s iconic tree. Inside, a fireplace built with local moss rock — handpicked by Ray — anchors the great room, while an undulating granite backsplash in the kitchen pays homage to the rising and falling peaks of the Rocky Mountains. At the rear of the home, a pair of climbing bear sculptures carved into a decaying tree continue the custom feel outside the great room window.
Other stand-out features of the nearly 5,000-square-foot residence include the Douglas fir timbers that form repeating hammerbeam trusses, layers of cozy decks and patios that keep the couple and their guests connected to the outdoors and the solar-powered system, which allows the home to function completely independent of other energy sources. “The whole house is run off of two underground propane tanks, 45 lead acid batteries, plus a host of solar panels, so it’s totally self-sustaining” says project manager Brian Hair of Colorado Timberframe, who also shares that the frame is encased by SIPs and spray foam. Ray adds: “You could call it luxury, off-grid living.”
With all of the design decisions and construction behind them, the couple can finally relax. “It was fun, but exhausting,” laughs Michelle. They now have the perfect place to sit back take it all in, day or night. “You can really see the Milky Way, and we have great meteor showers,” says Ray. “But we also have awesome sunsets; they’re jaw-dropping.” Just like the home, itself.