In truss systems, engineering and art intersect, creating the open-concept designs that today’s buyers seek. But more importantly, truss systems provide the basis for a strong, sturdy timber home. Here's a look at the different types of types of trusses and how to choose the right truss style for your home. 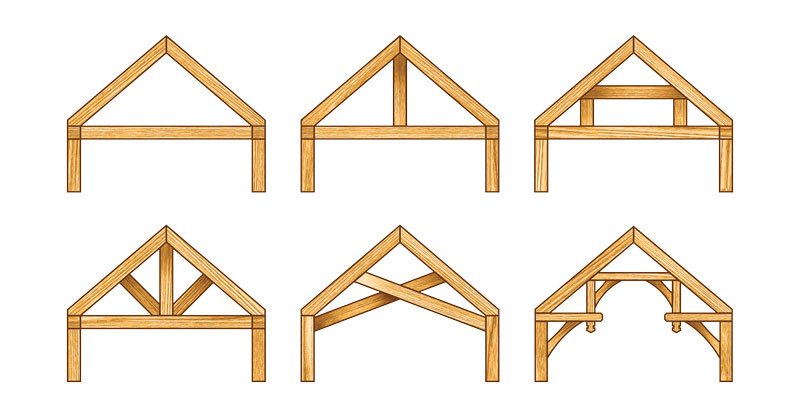 Trusses. You literally would not have a roof over your head without them. An essential element to any home, trusses not only support your ceiling, they offer architectural interest inside and allow for the open expanse of your great room — whether your timber frame is reminiscent of a grand cathedral or as cozy as a cottage. Here's what else you need to know as you select the right truss style for your timber home.

What is a truss?

A truss is the timbered unit composed of some combination of vertical posts, girts, main rafters, struts and knee braces joined together with pegs to form a single complete section of the frame called a bent. This bent is then used to support your home at the ends, center or both. Put together on the ground and then raised by hand or crane, the bents are then joined with another bent by ridge beam, girts and perhaps purlins to form a bay — the area of space between two bents.

When it comes to the structural integrity of a timber frame home, trusses play a strong supporting role — literally — by providing crucial support to the walls and roof. Aesthetically, trusses also serve as the crowning jewel in timber frame construction.


Because of their unmatched impact on the strength and beauty of a structure, it’s important to choose your trusses carefully. Fortunately, there are no right or wrong answers when selecting a style, according to Dan Trimble, a 20-year timber framing veteran and regional project manager for Woodhouse, the Timber Frame Company. “It all comes down to preference and the character and emotion you want to have in your home,” he says. “Trusses are a lot like a picture frame; they’re the frame that fits around your life in the home.”
See also: Essential Timber Frame Key Terms 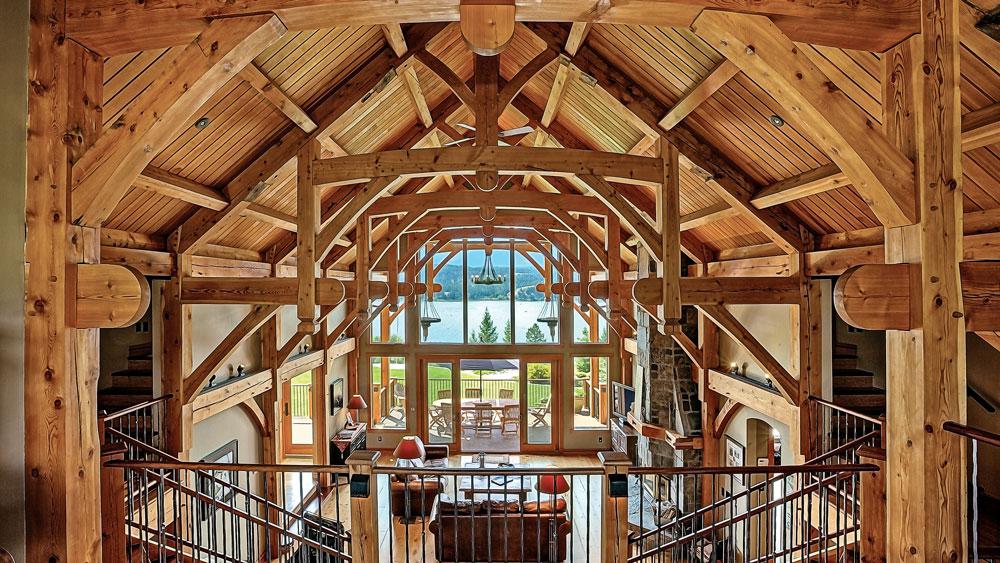 What are the different types of trusses? Which truss style is right for my home?

There are five basic types of trusses in modern timber homes: common, queen post, king post, hammerbeam and scissor. Each style may be used for one story or two, depending on personal preference, load capacity, window placement and room layout. Whether your style is contemporary, traditional, rustic or refined, one choice is sure to be a perfect fit for your timber home. And if you can’t decide, combine a few different styles to create a truly unique interior look.
Here's a guide to each type of truss style:


The Common Truss is, as its name implies, the truss most often seen in modern timber frames, and it is both strong and affordable. It’s a clean design, easily identified by the manner in which the lower horizontal beam (chord) joins the two rafters. It is an ideal fit for a cozy, cottage-style home, as it won’t overwhelm the space visually. This style also can serve as a cost-effective way to add wood flair to a less public area, like a master bedroom.

Illustration courtesy of Timber Frame HQ.
The queen post truss expands on the common truss with the addition of two posts, dividing the gable. A queen post is a rectangle within a triangle that effectively opens up entryways and focal points in your home. The queen post truss style can span distances of 30 feet or more and visually lowers the ceiling height for a more intimate feel.
This truss style works well for drawing attention to the windows in a great room and adding strength to the truss. A fully extended queen-post configuration can be used to frame the fireplace while simply adding a beam between the posts can create the perfect mantel. Like king posts, this style offers greater width possibilities, thanks to the vertical posts that extend to the floor and transfer the load.

Illustration courtesy of Timber Frame HQ.
The King Post Truss contains a single post in the center of the gable, known as the king post. This post divides the gable in two, and often includes two struts on either side. King posts come in two varieties: suspended and full. A suspended king-post truss with a single, vertical post is often used for areas that are about 16 feet wide, a comfortable-sized room with the option for centered windows or furniture. The full-length king post allows for wider spans, but also includes a vertical post that transfers the load of the ridge beam to the floor. Because of this, a full-length king post would best be used in between bays or on an end wall where windows or wall spaces could be balanced on either side of the post.
King posts are perfect for large great rooms or areas where the trusses will have to span greater distances. The king post truss is often used in conjunction with other types of trusses; its bold appearance can serve as a focal point of a home’s design.
The horizontal beam of this style brings rooms to a human scale, offering a cozy feel to a space despite the vaulted ceilings. Keep in mind that the bent girt (a horizontal beam that reinforces the girt) may limit placement of tall furniture; while centered vertical posts and braces limit the possibilities for upper-level windows in your plan. Also, a post may be in the way of a fireplace or television armoire, which needs to be centered for ideal room arrangement.

Illustration courtesy of Timber Frame HQ.
The most complex of all the joinery systems, hammerbeam bents can be more expensive, but the price may be well worth it for the breathtaking effect. The hammerbeam truss is both dramatic and complex, and, with its open-air center, it requires the skilled eye and hand of an engineer to guarantee its structural integrity.
The strength of the hammerbeam offers the possibility of wide expanses of about 24 feet without the need for vertical support posts. That means you could include a whole wall of uninterrupted glass with only enough framing to hold the glass together and a hammerbeam supporting the roof. The lack of horizontal beams will result in a decidedly lofty look, which is perfect for showcasing your landscape.
A big advantage of a hammerbeam is that since it doesn’t have a chord (the bottom tie beam found in the other truss styles), it can span a wide distance with shorter pieces of wood. This can be a huge asset if you are building with a species in which long, straight timbers aren’t in plentiful supply.

Illustration courtesy of Timber Frame HQ.
The scissor truss represents a departure from the other four, offering a unique design wherein two beams run from the lower part of one rafter to the upper part of the opposite rafter. The beams are notched and fitted together to create a smooth finish and strengthen the truss. The scissor truss style is ideal for steep roof pitches and can create a narrow, cottage-like aesthetic. Plus, it's perfect for those seeking something unique!

Where should I showcase my home's trusses?

Many homeowners opt to keep trusses in featured areas, like the great room or master bedroom, where they’ll really make a statement. Others want the look of wood in every room of their homes, possibly opting for less intricate trusses to keep costs down. An architect, designer or timber company representative can help you determine what works best for the budget, size and style of your home. But ultimately, the choice is up to you. 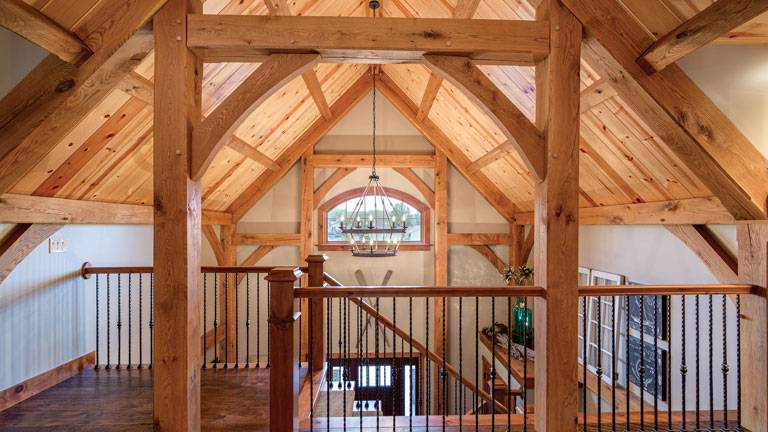 What size truss do I need?

Unlike most modern stick-built homes, timber-framed trusses are frequently exposed, amplifying the feeling of space and volume inside. The timber frame ceiling can be at the roofline rather than tied to the base of the truss’s lower beam, and individual rooms can have varying ceiling heights thanks to that flexibility. However, the newfound ceiling height and architectural interest of a timber truss often mean an engineer is required to guarantee these beautiful open trusses will hold up under the load of the roof.

According to the Timber Framers Guild, (a non-profit membership organization dedicated to the art and science of timber framing), to determine the span and scale of a timber truss, a structural engineer follows these four steps:

Once designed and engineered to meet the criteria above, the trusses are pre-cut in the timber framer’s shop. They may be assembled there or onsite, depending on the timber framer and the site’s restrictions. Modern timber frame trusses can be connected using exposed steel plates and brackets or the traditional mortise-and-tenon method, using wood pegs to secure the pieces together instead of metal fasteners or nails. 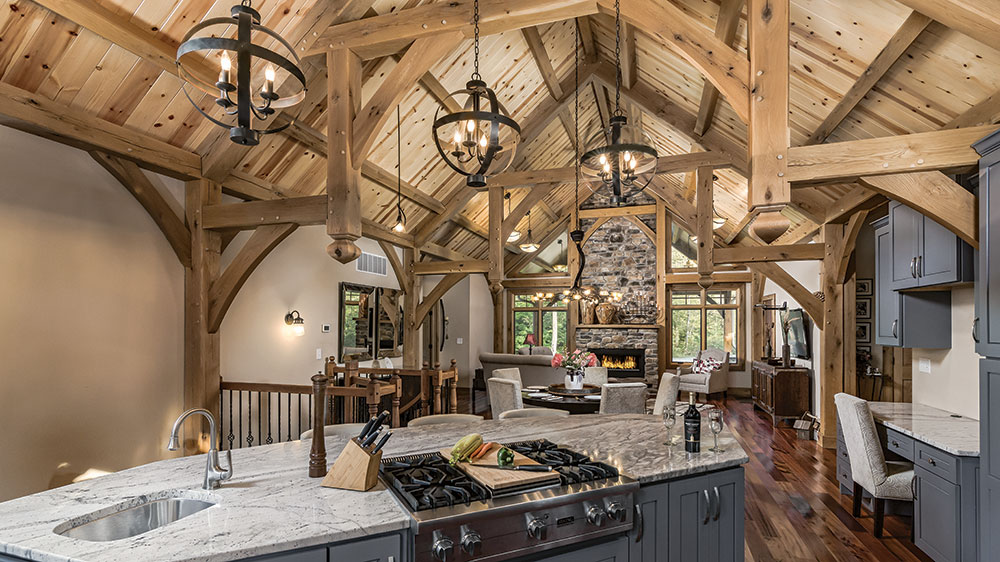 So, you've selected a truss style. Now, let your timbers do more than keep your house from tumbling down. Use them to make a statement. Here’s how.

Using 6-by-6-inch timbers achieves a look that’s different from 8-by-8-inch ones. Naturally, taller walls look sturdier supported by a thicker frame, but you can control the scale to your liking by your choice of dimensions. Remember, too, that not all timber-frame homes have cathedral ceilings or barn-like great rooms, so scale the timbers accordingly.

Different wood species have their own hue. Douglas fir is generally redder than hemlock, for example. But you can stain your timbers to suit you and your decor. Pickling, originally used to make new wood look instantly old, is a popular lightening treatment.

For eccentricity, consider cruck timbers and bowed truss chords. Crucks are naturally curved tree trunks, which are split or sawed lengthwise. Using a slightly curved timber for the base of a truss conveys grace.

Whether your timbers are planed smooth or left rough achieves different looks, from refined to rustic. Reclaimed timbers from old mills or barns create an older distressed effect.

A common embellishment is to chamfer the edges of timbers instead of leaving them square. Chamfering is a subtle beveling technique that adds a level of craftsmanship to the visible portions of the timbers.

Bracing timbers to soften the intersection of posts and beams and to suggest greater stability can produce appealing effects. The most common is the simple curve. A variation is the gunstock, so named because it broadens at the lower end, resembling a rifle butt.

Most timbers are connected by a mortise-and-tenon joint. A groove, or mortise, is cut in one timber, and a projecting tongue, or tenon, is cut in another to fit the groove. Sometimes the tenon projects through the mortise to the other side, exposing the joinery in eye-catching fashion