A Waterfront Timber Home in Texas

When disaster forces a Texas couple to rebuild their waterfront timber home, they’re determined to make it even better than before. 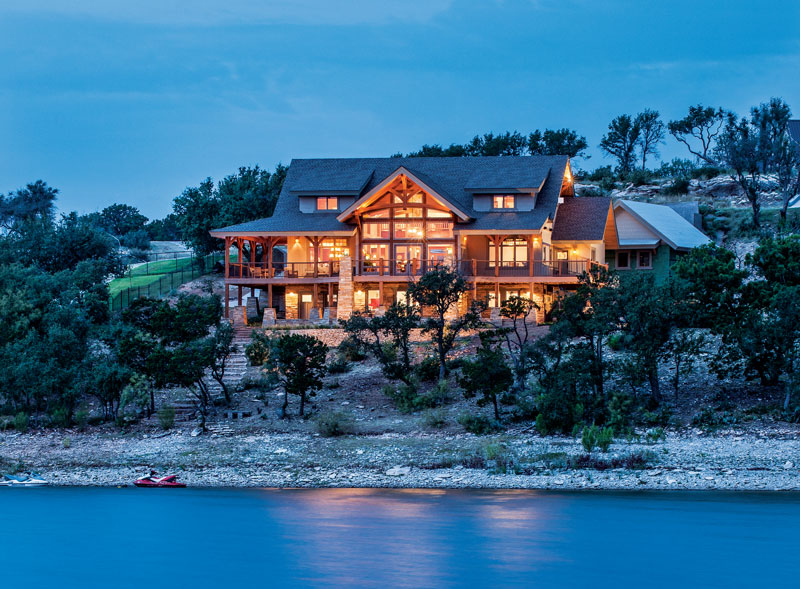 In the early morning hours, Russell and Susan Hall head to the deck of their lakefront home on central Texas’ Possum Kingdom Lake, coffee in hand, to take in the sights and sounds of the surrounding landscape. 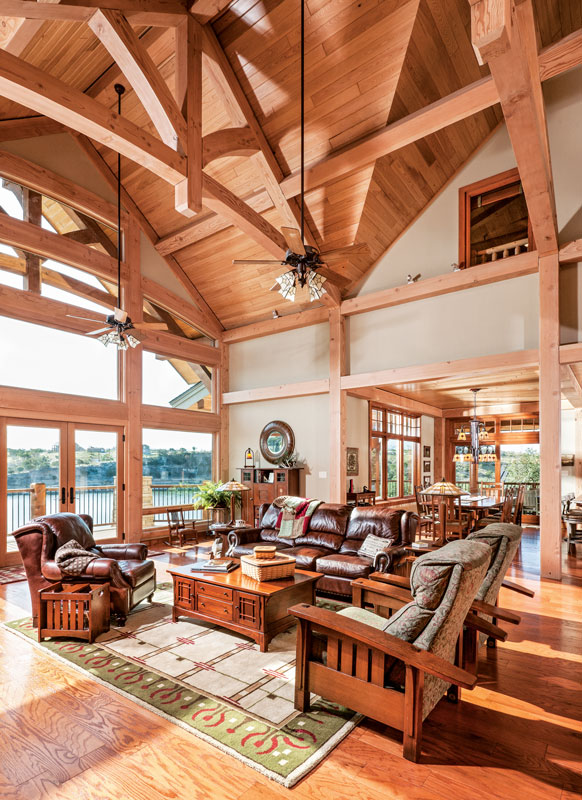 Douglas fir timbers shine in the home’s living areas where architectural details abound, including tongue-and-groove cypress ceiling planks, a series of king post trusses and even interior windows that open from the bedrooms into the great room.


Melodies from the birds that nest along the limestone bluffs ring out in the crisp air. The towering cliffs plunge into the lake below, while a layer of dew glistens on the wildflowers and junipers that color the grassy bluffs. The whole scene is washed in a vibrant, golden glow. But, it wasn’t so long ago that a different kind of glow filled the skies. In 2011, a series of devastating wildfires swept through the popular vacation spot.

“It burnt to the ground in under 15 minutes,” says Russell of the log home the couple had built as a family retreat a decade earlier. “We lost everything.” Everything but their resilience. While many of their neighbors decided not to rebuild, the Halls approached the setback as a chance to expand and update. After discovering the company that built their first home was no longer in business, they decided to build a timber frame instead and looked to PrecisionCraft Log & Timber Homes to provide the timbers, design and installation. They couldn’t be happier with their decision. 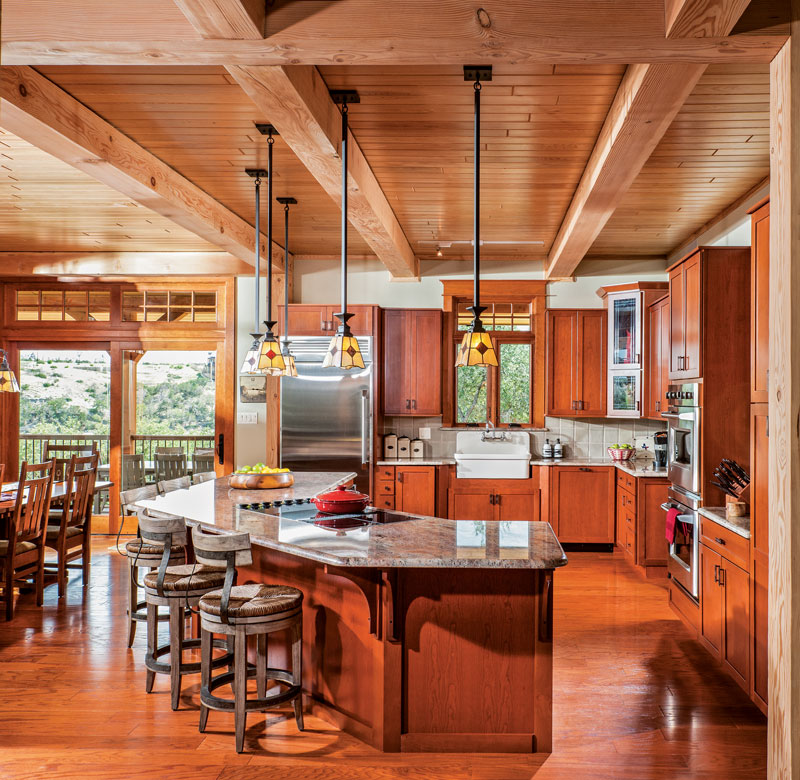 The Arts and Crafts theme is apparent in the home’s kitchen that opens into the window-filled dining space. 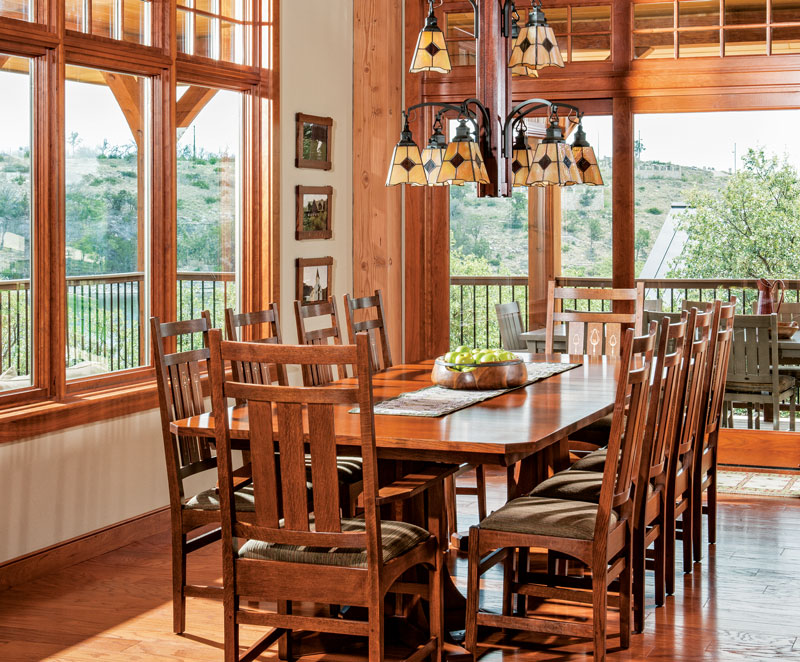 There’s room enough to host a crowd in the open dining area.


“The timber frame is a much quieter, sturdier structure,” says Russell, an engineer by trade. “It has a more substantive feel to it.” For the new home, the couple envisioned an open design with a more spacious kitchen, larger bathrooms and a finished basement with a kitchen, movie theater and secondary master suite. “The home was designed as a family gathering place, so there were several details and spaces designed for this purpose,” explains Celeste Raygosa, PrecisionCraft’s Design Manager, M.T.N. Adds Susan: “It’s not unusual for us to have 15 to 20 people here on weekends.”

Thinking ahead to the future, the couple placed the kitchen, living areas, master suite and Russell’s office on the main floor. “The house is conditioned to large groups but also good for the two of us,” says Susan. The Halls also made plans to move the 6,400-square-foot house closer to the lake (for quicker jaunts to the water’s edge for boating, swimming and fishing), build into the limestone bluffs rather than on stilts as they had before — “It took three months of excavating into solid limestone,” says Susan — and create a level driveway. 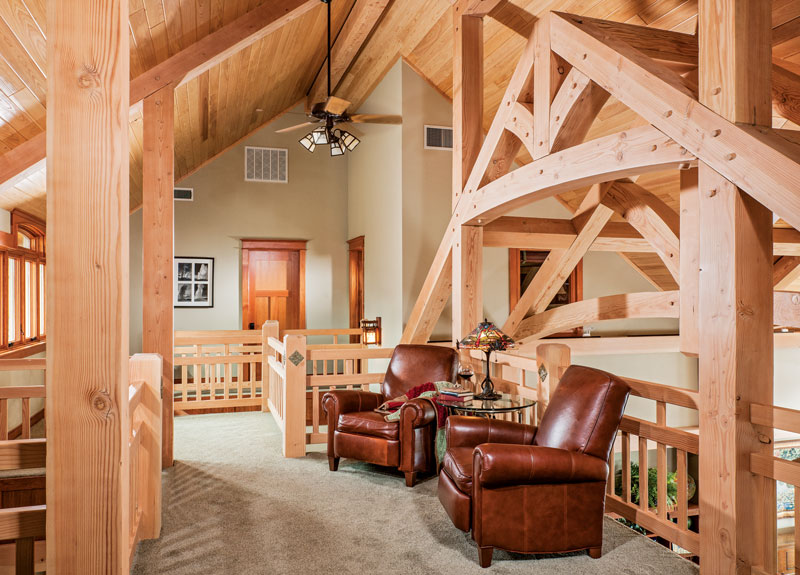 The loft, outfitted with a pair of cozy chairs, is an ideal reading nook. 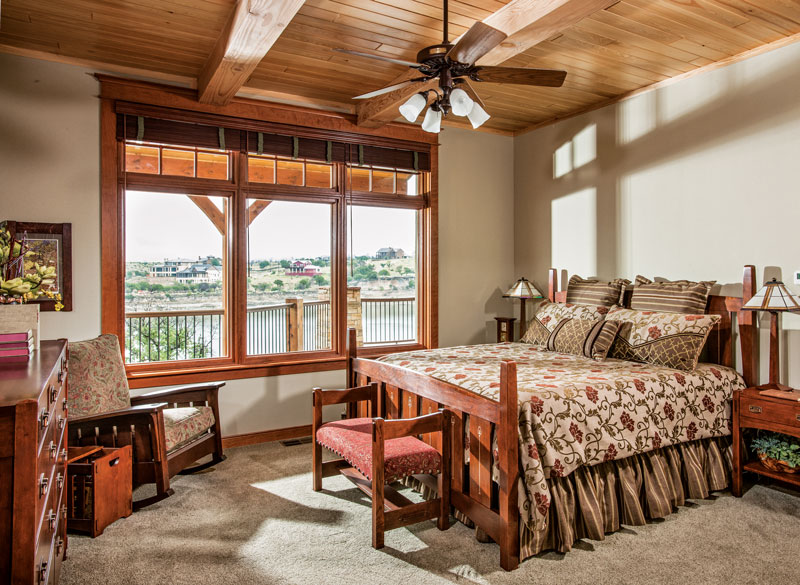 
Amidst the changes, the couple wanted the home to reflect their own welcoming nature. “Our home has never been like a museum where you have the sense that you can’t touch something,” Russell says. Susan agrees: “We want everyone to come in, relax and unwind.” The natural materials, including Douglass fir timbers, oak floors and local limestone, along with the Arts and Crafts style of the new structure and furnishings reinforce the easy-living feel. “Everyone that walks in feels at home, they kind of sigh and all the worries flow out of them,” Russell says. 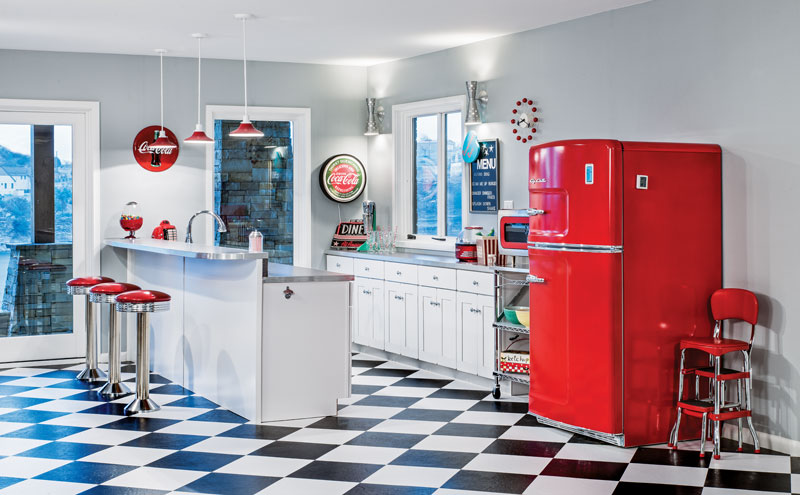 The basement’s playful theme is a throwback to the Halls’ childhood days. The kitchen’s nostalgic color scheme, retro-styled appliances and seating, and black and white checkerboard flooring all nod to classic 1950’s decor.


Like the original home, the new design kept the lake front and center, playing up big water views with a rear-facing design, multitude of windows and expansive decks on the upper and lower levels. After a full day of fun on the water, everyone comes together for friendly conversation and laughter on the rear decks where the day began for Russell and Susan. It’s in those moments that the couple is assured that rebuilding was the right decision. “There is a great joy in being generous and sharing your life and the joys of your life with other people,” Russell says. “For us, this home is one way of being generous.” For the home’s timber provider, the home’s completion has been equally fulfilling, says PrecisionCraft’s client representative Mark Camper. “It was really exciting,” he says, “to be part of the family’s transition from the tragedy of losing their vacation home to the joy of loving their new timber home.” 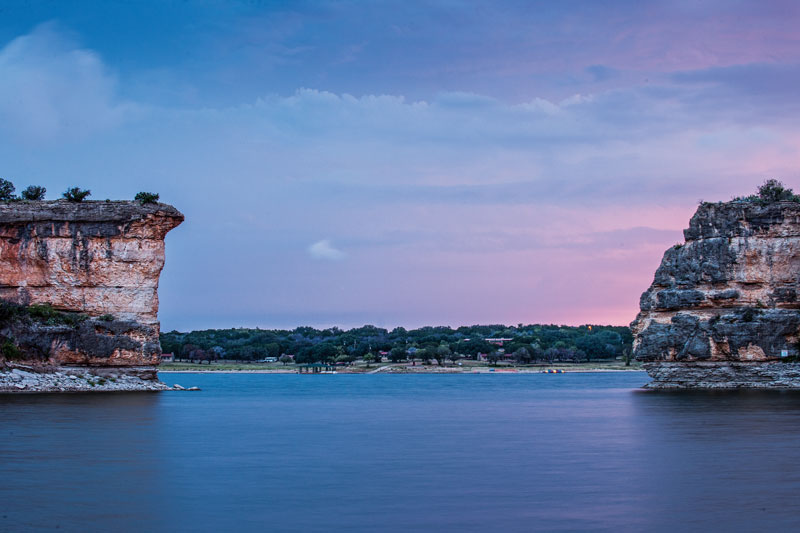 A break in the limestone cliffs, known as Hell’s Gate, is one of Texas’ most famous landmarks and is clearly visible from the Halls’ home.
★