Perched perfectly amongst the North Carolina mountains, this natural timber home retreat boasts a beautiful design — from the outside in.

Previous Next
Photography by Roger Wade
Styling by Debra Grahl
Nestled within the spectacular foliage that draws people to the mountains of western North Carolina, you’ll find the Bowdens’ equally spectacular timber home — or then again, maybe you won’t. Intentionally positioned on the property to blend seamlessly with its natural surroundings, the Bowden house is somewhat of a hidden gem — a characteristic both dictated by the homeowners wishes and the Balsam Mountain Preserve where the house is located.

“In this area, you’re really there to see, not to be seen,” explains M. Shawn Leatherwood, owner of The Architectural Studio, P.L.L.C., in Waynesville, North Carolina, and the architect on the project. “This idea really led to the way the house was designed to ramble around the property, and the look of the house was somewhat dictated by the architectural materials native to the region.”

The striking piece of land that the home sits on also commanded particular design elements within the house itself. “The Bowdens wanted the house to really open up, so we incorporated three large sets of bi-folding doors,” explains Leatherwood, adding that this decision allows the great room and passageway to open up to the covered deck and hot tub.

“The house really lives as one big room.” The wide use of windows and free-flowing design also helps the home capture the surrounding views. “We spent a lot of time on the lot picking out features we wanted to showcase,” says Leatherwood. “It became a process of prioritizing the views in relation to the priorities of the interior spaces.” 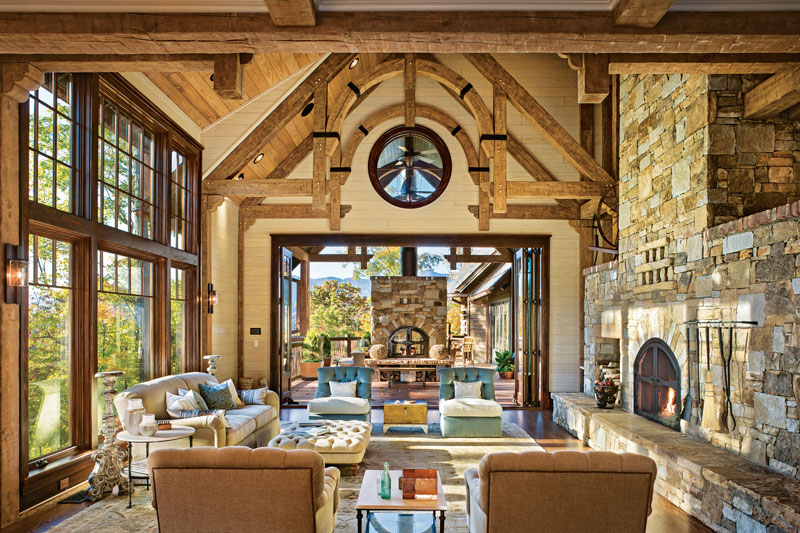 To allow the home to further blend with its natural surroundings, its construction focused on reclaimed and local materials. Many of the main level’s timbers (some structural, some accents) are reclaimed, while thestonework found on the exterior of the house, as well as on the fireplace surrounds, is a blend of stones indigenous to the area. Reclaimed brick was also used throughout, and lends an industrial feel to the otherwise rustic finishes, such as the bark and cedar siding, and distressed floors.

“We brought pictures to the table during the design phase to show the Bowdens the kind of materials and finishes we could provide, and what could be locally sourced,” Leatherwood explains. “Between the choices and the opinions of the entire team, we had this real melting pot of ideas and perspectives.”


It’s that collaboration that made the project exceptionally successful, says Malcolm Morgan, owner of Morgan-Keefe Builders in Arden, North Carolina. “For me, after nearly 36 years of being in the home-building business, the projects where the entire team is together from the start turn out to be the most successful projects.” 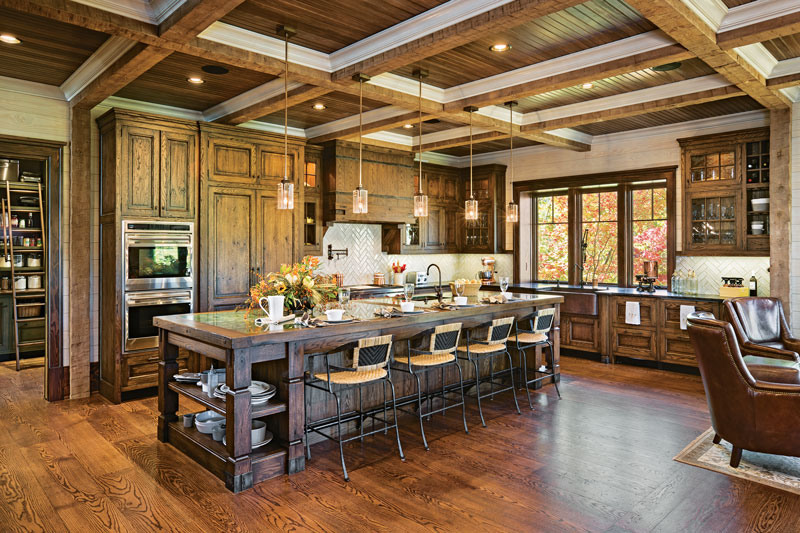 Leatherwood agrees. “The Bowdens had an interior designer from Dallas, and we had our team, so there were a lot of hands in the pot. I have to say, it sometimes led to some creative conflict, but in the best way possible. It was a really unique project where the team that was working on it made the biggest difference.”


Originally meant to be a part-time home for the Bowdens who are full-time Texas residents, the nearly 8,000-square-foot, five-bedroom retreat has proved to be hard to leave. “It was meant to be a place to escape the Texas heat, but they love it so much, they’ve never really left,” says Joel Fahey, project manager at Morgan-Keefe. “This home has become the mainstay.” From the spectacular setting to the one-of-a-kind design, we can see why.
See also Reclaimed Timber: The Benefits of Recycled Materials
★