One couple builds a timber home that’s downright spectacular — both inside and out.

All the angles are covered in the open floor plan: timbers run through, across and around. All aspects of the frame are visible, creating a fine balance between aesthetics and function. A bookcase on the side of the fireplace houses cookbooks to be used in the open kitchen. Locating the fireplace (built by Martin Thurston of Eagle Hollow Stoneworks) in the middle of the house allows for panoramic views around the main level. The timbers seem to grow as they would in the forest, angling toward the light, says architect Jeremy Bonin. The master bath is simple; the owners wanted to focus on the west-facing view. The hickory tub surround and other wood accents tie the design in with the rest of the home. 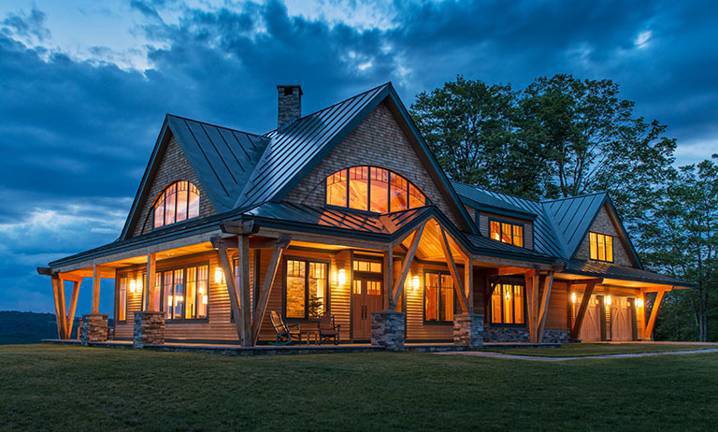 A house nestled inside a glass snow globe is basically the quintessential picturesque retreat. Now, imagine being inside that tiny house looking out. That’s a bit what it feels like for the homeowners of this Vermont hilltop house, with its myriad windows and panoramic view that seem to make the trees, mountains and sky part of the home’s interior.

A retirement home that the owners turned into a permanent residence a few years early, the house is a unique blend of farmhouse-meets-mountain abode, made possible by a strong creative collaboration between the owners, architects, engineers, builders and timber framers who worked on the project.

The homeowners, who love winter and the outdoors — as well as their privacy — opted for Vermont over Florida and found an 86-acre parcel of land that had once been part of a large farm. They put the acreage into a land-use easement program with the goal of doing as little as possible to impede on the property.

They built the half-mile driveway skirting a hayfield’s border so the hayfield could remain intact. Their design priorities, they say, were “to see outside from everywhere in the house” and to have a home that is economical, energy efficient and different from traditional timber frame homes. Situated on the top of a hill on what locals call the “night pasture,” the place where the cows gathered at night, the 2,900-square-foot house (not including the lower level) boasts an open floor plan, a main-level master suite, two extra bedrooms and a music room upstairs. A porch, with a bluestone walkway encircles the house. “Maybe it’s not a porch, more of a veranda. We call it the ‘porchanda,’” the homeowners quip.

Before they could even think about placing the timber frame, they had local excavator Tim Ward blast through the hard Vermont granite to prep the site for the foundation so they could have a lower level with enough height for the proposed sauna, exercise room and wine cellar.

“The lower level was one of the hardest challenges,” says architect Jeremy Bonin, principal of Bonin Architects with offices in New London and Meredith, New Hampshire. “Everything else ran fairly smoothly.”

To meet the desire for a home with nothing on the exterior walls to block the view, Bonin designed the house with the fireplace in the middle. “This allowed us to have four points on the exterior where the timber frame touches down inside the floor plan. It’s a non-traditional timber frame,” Bonin says. “I like the idea of everything reaching upward like a tree.

The tallest point is the chimney.” The fireplace as well as all the timbers — made of Douglas fir for its strength — is structural. Bonin shared a 3-D model of his design with Vermont Timber Works in North Springfield, Vermont. “We imported it into our CAD system,” says Doug Friant, co-owner of the company.

“Everything in the design is canted and slanted. The normal load paths don’t go where they normally would, but that’s what made this project interesting — because it has so many angles. It’s aesthetically beautiful and out of the ordinary.” Vermont Timber Works developed the drawings and hand cut the timber frames with power tools. “A lot of them couldn’t be cut with a CNC [computer numerical control] machine because they’re too complicated,” Friant says. “It was a huge team effort to have a building like this one come together. And it was kind of fun. We were able to follow Jeremey’s vision and the structural requirements of the project and supply a beautiful timber frame.”

Friant knew joinery would be a challenge. The engineering program he uses analyzes the beams and their reactions — what load a beam has to take at its ends or when another piece comes into it. After the analysis, Friant created shop drawings and worked with the engineers at Fire Tower, based in Providence, Rhode Island, to come up with solutions. In places where the beams support more of a load, they are doubled and held together with cherry wood keys and banded with wrought-iron steel straps.

In some areas there is a third beam connected with a curve cut into it, like slivers of a waning moon, echoing the shape of the upper windows and also allowing light to shine through. “That detail was part of Jeremy’s vision,” Friant says. “It makes the design more interesting.” While the couple loves to entertain — their kitchen is designed for cooking and gathering — they spend much of their time on the porch.

“We basically live out there, weather permitting,” they say, watching both sunrises and sunsets and taking in the long range views of the green mountains and surrounding hills. The porch design is similar to the interior timber frame with posts “canted to lend a sense of a natural forest, where some trees will lean toward the light, while others are able to take a straighter path,” Bonin says. “The porch corner is unique in that we were able to incorporate a type of not-often-used framing called dragon ties, timbers that tie wall plates (or porch eave plates in this case) together perpendicular to the line of the hip in the roof. It gives strength to the connection and a unique way to have the canted corner posts support the roof.”

While the occasional cow still wanders along, the couple gets to enjoy skiing, snowshoeing, hiking — even sailing nearby — and the quiet privacy they crave. But there’s one thing they say they miss: Over the course of the 19-month build they became friends with their creative collaborators. “We were depressed when the builders left and said, ‘We’re done.’”