Holly Ostrander and her husband Tony Hanslin waited a long time to build on their 5-acre New Hampshire lot, and when they were ready, they took their design cues straight from the region’s barns.

“We’ve lived in New England all our lives in various states, and we just love the local vernacular, particularly the Victorian period,” says Holly. “When we started to think about designing a home, we just drove along the back roads between New Hampshire and Vermont and took pictures of various barns. And we noticed we kept taking pictures of the same Victorian barn, basically.”

What sprang from those road trips is a timber-frame carriage house with an 864-square foot footprint and characteristic period details that include a “witch’s hat” cupola and a cross-gabled roof. And while it may look like it was built generations ago, the carriage house is completely modern in its energy-sipping performance and all-seasons comfort.

Holly took the lead in designing the carriage house, which was originally drawn up to serve as a garage and guest space for a much larger main house.

“This was originally going to be the guest house and we were going to build a larger house,” Holly says. “So we figured this would be the garage and there would be guest space up above it.”

That helps explain the layout. The two-story design places the main living quarters, including a single bedroom, bathroom and kitchen, on the upper floor. The first floor, what looks like a three-bay garage from the outside, may have started life as vehicle storage but it’s actually used for additional living space, with a bedroom, bath and laundry. The second floor provides enough space for the couple to live comfortably, while the ground floor gets frequent use by children in their melded second-marriage family.

Despite the modest size of the main living area, big windows and an open floor plan help it feel expansive. “I’ve been there a number of times when they’ve entertained eight or 10 people and it’s never uncomfortable,” says Andrew Button, president and general manager at Yankee Barn Homes, the Grantham, New Hampshire-based company that built the home. “It doesn’t feel cramped. For the two of them it really works.”

Yankee Barn Homes built the home’s structural frame with Douglas fir, then wrapped it in a 2-by-6-inch stick-framed envelope and panelized 2-by-8 roof. Insulation comes in the form of rigid polyisocyanurate foam, with an R-value of nearly 7 per inch, says Andrew Button, president and general manager at Yankee Barn. The wall cavities got 4 inches of rigid foam between the studs, and the roof got a total of 7 inches, yielding overall R-values of 26 in the walls and 44 in the roof.

As important to energy efficiency is air sealing. Leaky houses are never very energy efficient, but this one had very low rates of air infiltration: 1.05 air changes per hour as measured with a blower door. That’s far below the norm in houses built to code minimums, and within striking distance of the stringent Passivhaus standard. It also may help explain why the house is so comfortable in both winter and summer. Heat comes from a radiant-floor system that draws on a propane-fired on-demand water heater, which also supplies domestic hot water.

“I have to tell you this is the most energy efficient house I’ve ever lived in,” Holly says. “It’s warm, warm, warm in the winter. We have central air and it is cool with nice air in the summer. I wouldn’t believe me if I didn’t live here and really experience it.”

The couple approached the project in a way many homeowners might consider backwards: first a tea house, then extensive landscaping and then the carriage house.

Yet their method has helped create a unified whole. A bridge spans a stream between the carriage house and tea house, linking the two hubs of the property. Gardens full of indigenous plantings, a two-year project by landscapers, marry the buildings to the site.

The only rub? After deciding to stay put in the carriage house and give up plans to build their Georgian design nearby, the couple finds they have no garage at all, so their cars stay outside year round. “I find I wouldn’t want to leave this house,” Holly says. “Why would anyone need two houses on one site? We’ll just have to build a garage someday.” 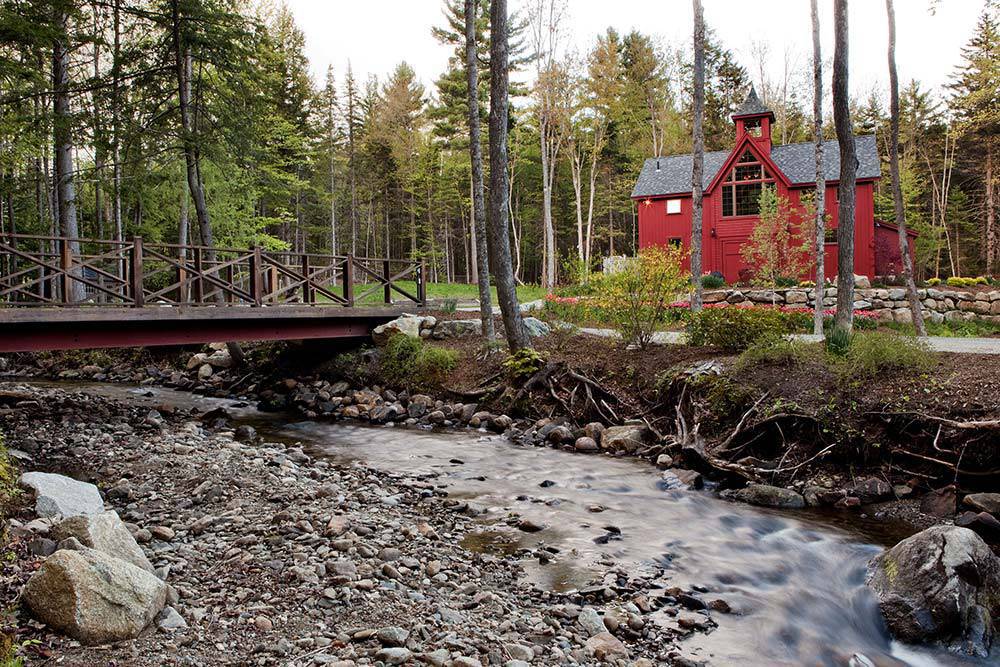 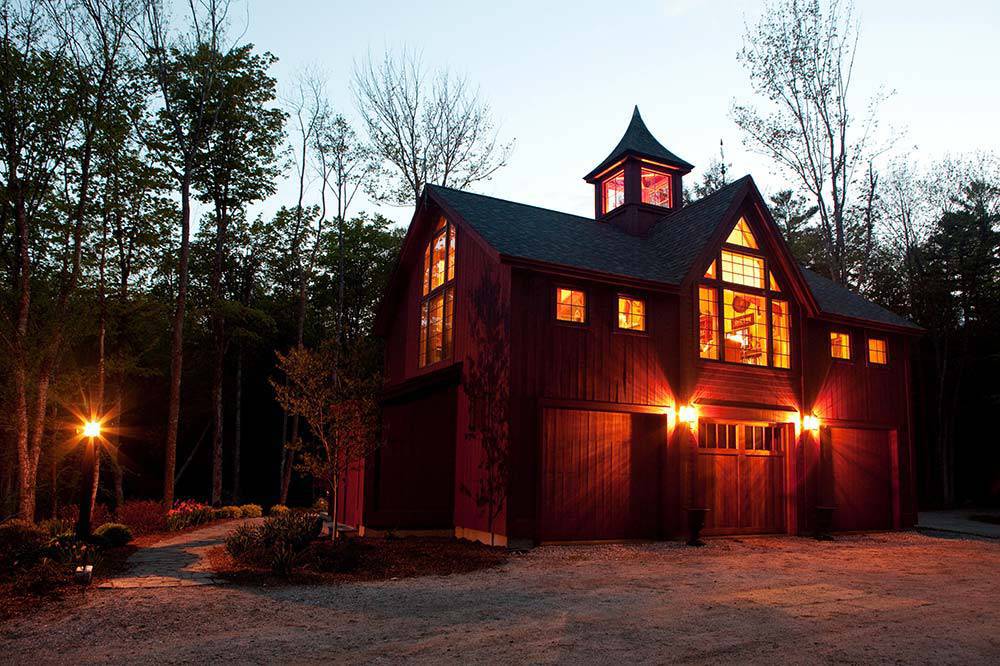 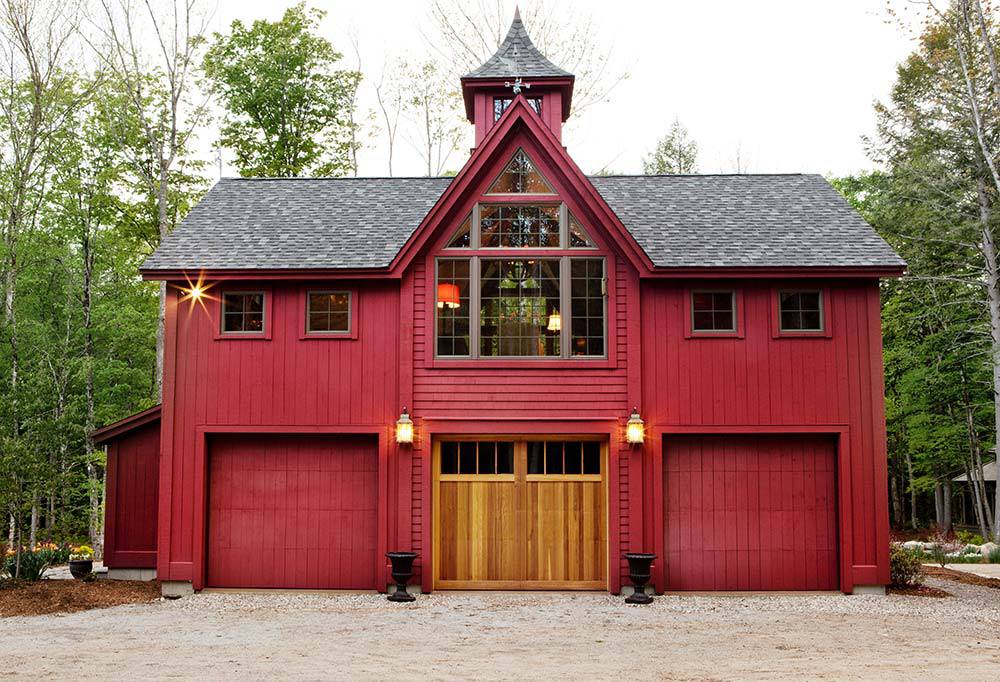 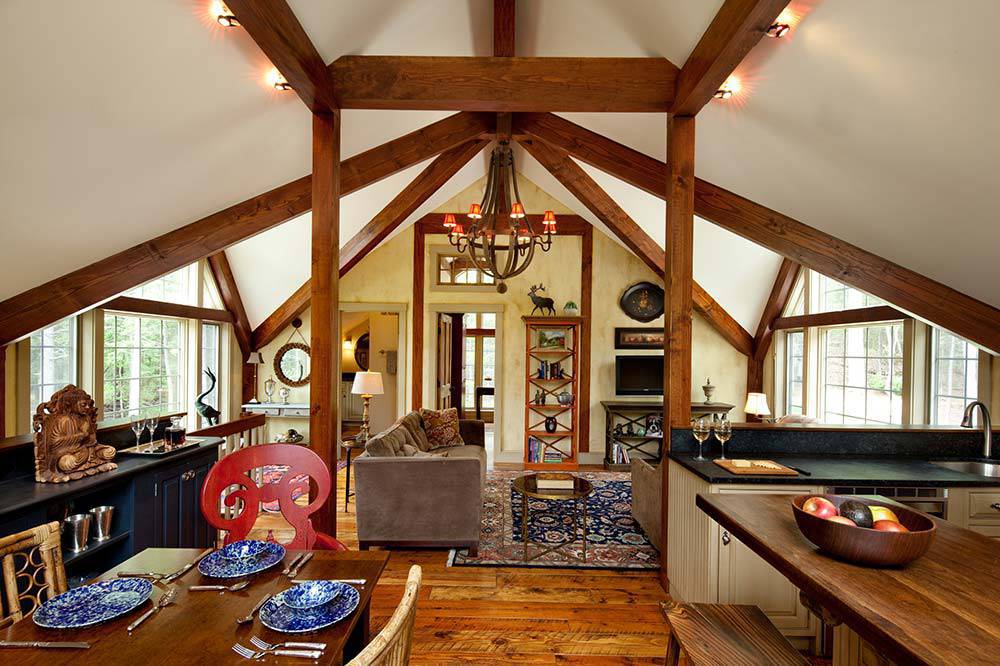 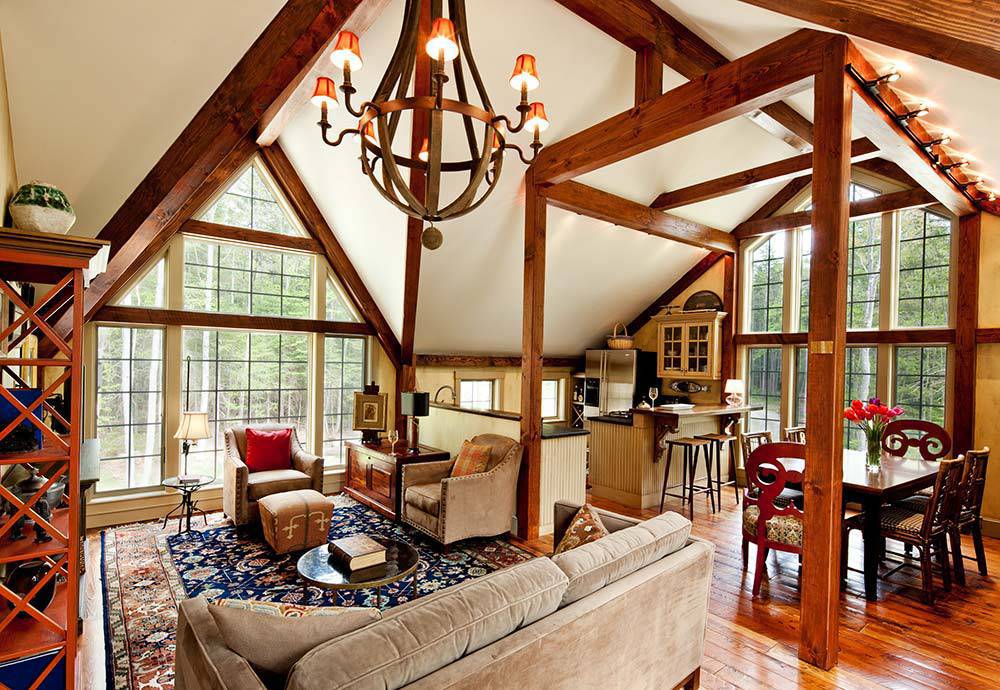 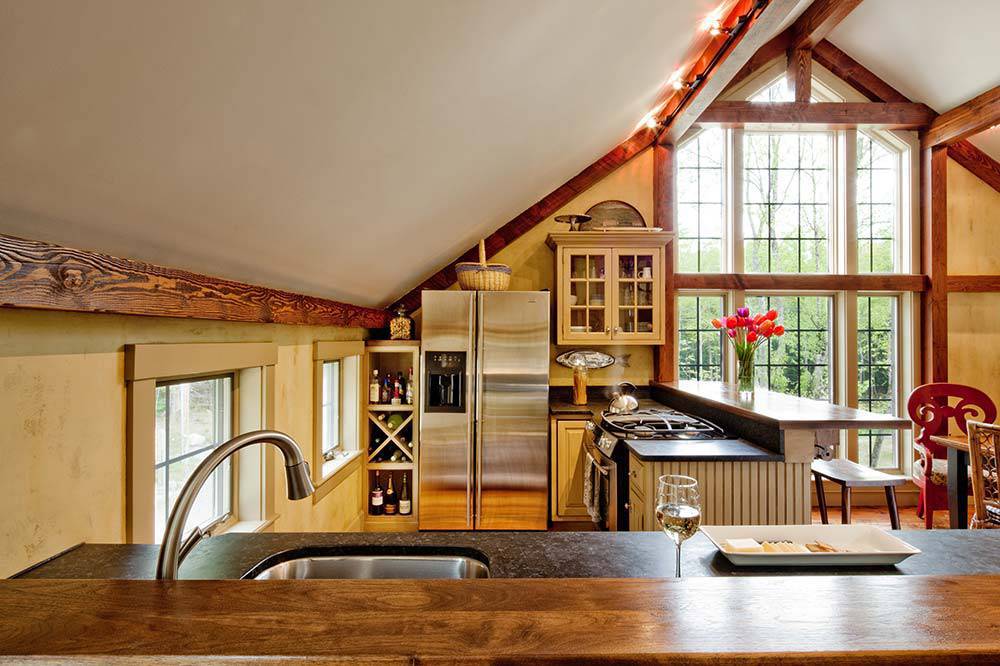 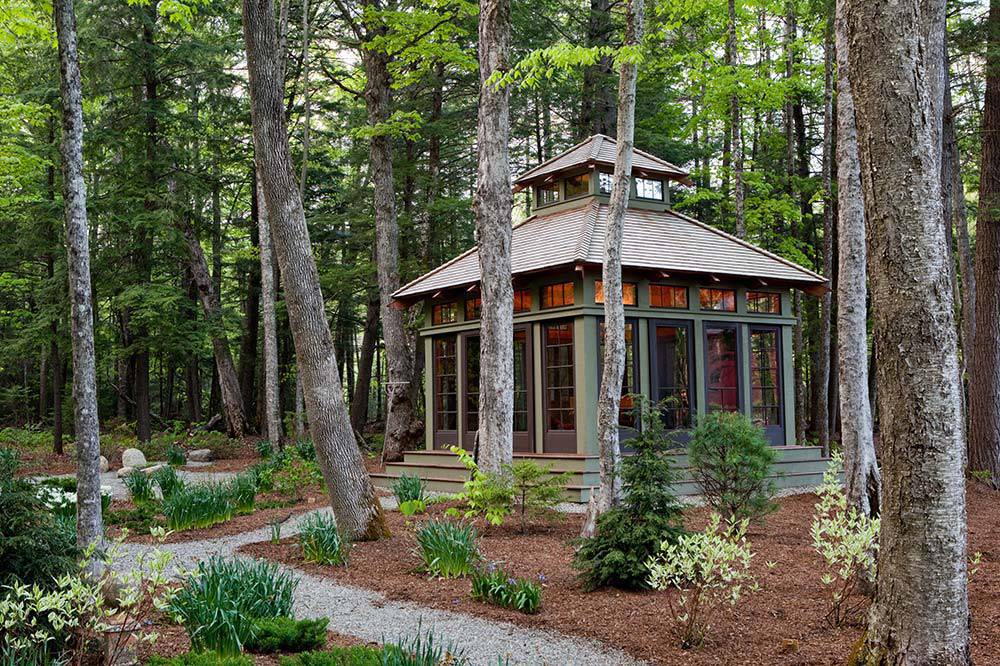 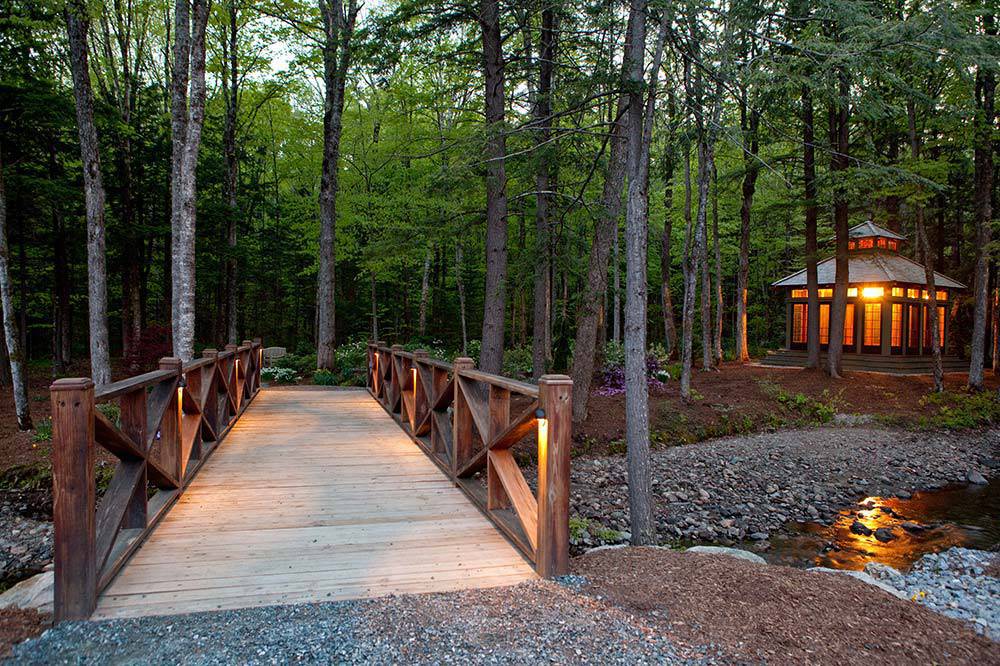 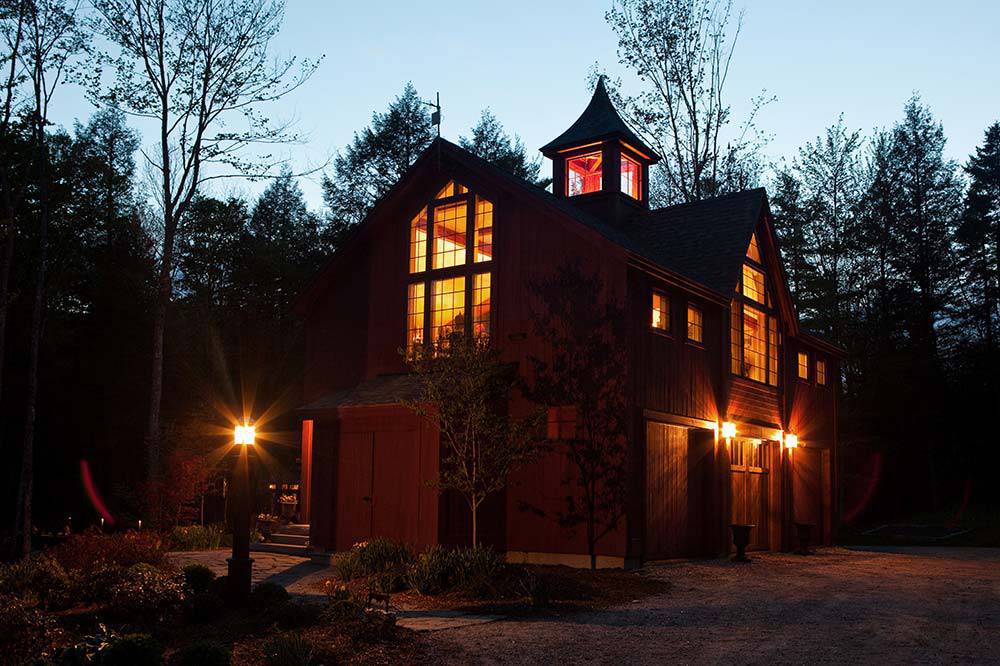 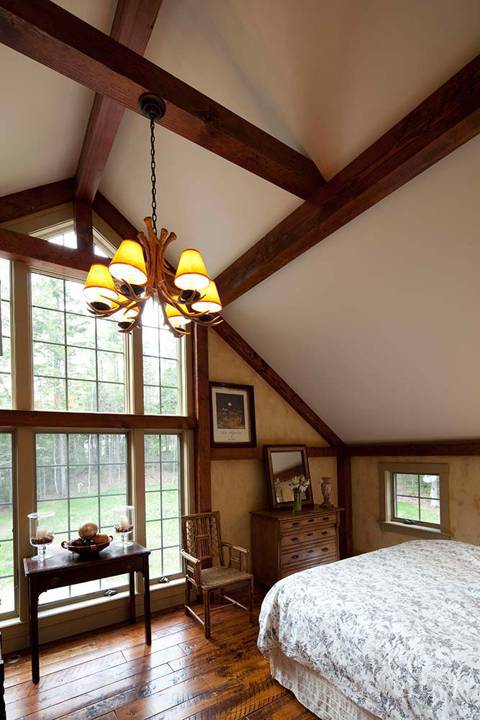 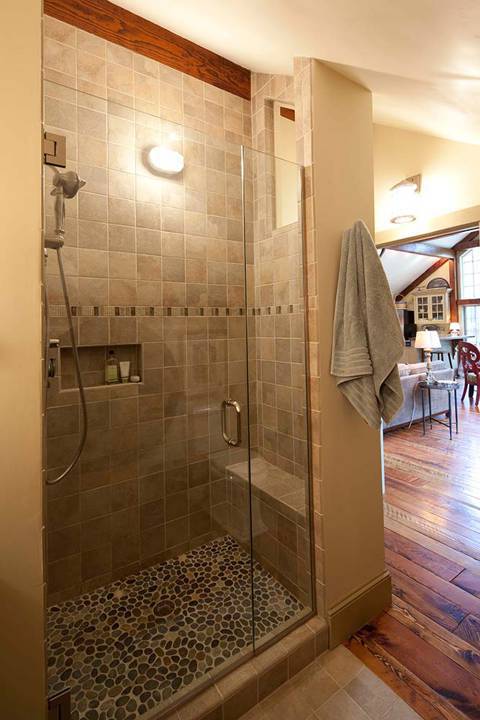 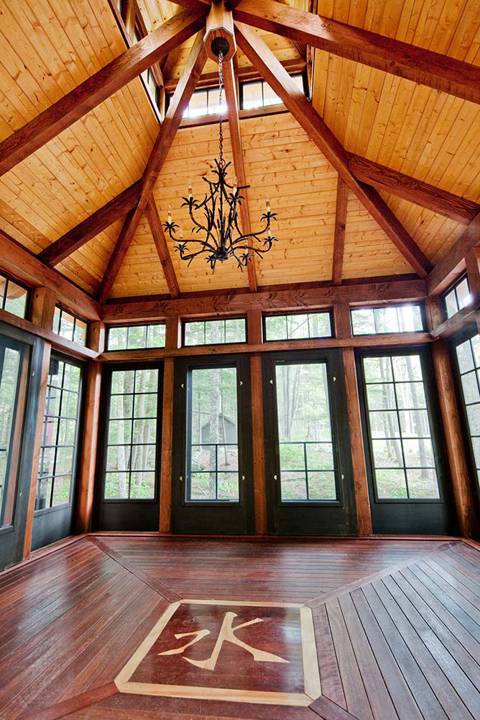