This Retreat Along the Coast Boasts Art and Craftsmanship

Breathtaking views from the watchtower are just the start of this timber-framed coastal retreat’s appeal.

An observation tower adds interest and topography to the home’s cruciform footprint. The home reads smaller than its actual size with the front disguising the back section. Samuel Ebersol, general manager of Mid-Atlantic Timberframes, describes the home as its own unique design. He says, “There are so many different concepts. Outside railing posts evoke gingerbread designs used on homes on Martha’s Vineyard.” The great room showcases many spectacular custom-
crafted elements — the organic form of the rock fireplace, stairway scrollwork and the chandelier, which is the work of an ironwork master. Artisan glass and hand-forged iron meld an elegant Arts-and-Crafts design with a rustic demeanor. The great room chandelier marks the cross intersection. The form emphasizes the 24-foot vaulted ceiling that continues down the back hallway. The great room spills into the kitchen while the loft reminds people that this space carries the genetics of a traditional timber lodge. Top sash window grilles are another Arts-and-Crafts detail, a genre known for its simplicity as well as beauty in an object’s form and function. The Marvin windows are the home’s only element that was not custom-designed and built from scratch. Custom cabinetry in a distressed green finish adds a rustic contrast to the crisp and clean granite countertops brushed with a complementary green. A spiral staircase to the observation tower adds unexpected panache. The ironwork in the spindles replicates the primary stairs’ wood pattern. The fireplace boasts a biophilic design; it mimics nature’s organic, unstructured forms. The walk-through arch linking the great room to the grand stairway cranks up the experiential dimension of the design.

Douglas fir post-and-beam framework becomes the principal feature in the bedrooms, which also showcase reclaimed white oak flooring. Because it’s reclaimed, the panels are in varying sizes and widths. Even the bathrooms use custom-tailored cabinetry and hand-forged iron fixtures.

An observation tower adds interest and topography to the home’s cruciform footprint. The home reads smaller than its actual size with the front disguising the back section. Samuel Ebersol, general manager of Mid-Atlantic Timberframes, describes the home as its own unique design. He says, “There are so many different concepts. Outside railing posts evoke gingerbread designs used on homes on Martha’s Vineyard.”

There are some places on Earth whose existence is pure enchantment. Such is the case with the multiple archipelagos stretched along Canada’s British Columbia and the U.S. Pacific Northwest. With more than 40,000 islands, it’s a place where Douglas fir, salt-scrubbed air, salmon, orcas and otters merge to create an environment that is both subdued and spectacular.

It takes a special kind of log and timber frame design to capture this region’s spirit. Welcome to a master-crafted timber frame that embodies the breathtaking beauty shared across these islands.

The hosts’ design requests were simple; the structure should have numerous bedrooms and a lodge theme. What they got was a structure with the perfect balance of form, function, style and aesthetics. Its jaw-dropping good looks don’t come from a showy display of grandeur. Instead, they come from an execution of the highest quality, handcrafted design paired with a demure, earthy personality.

The dwelling’s 3,681 square feet of interior space is divided between three bedrooms, a primary suite, the great room, an upper-level loft and an observation tower. The tower adds interest to the straightforward cruciform footprint.

“The biggest design element is the tower,” says Mark Myers, the owner and founder of Mark C. Myers Architects, Inc. and the project’s architect. “It occurred to me a tower would make the structure appear more interesting and give people a panoramic view.”

The building appears smaller than it is. The front disguises the back portion, which has three bedrooms, two baths, a laundry and a massive, 880-square-foot wraparound porch. The shape also plays a key role in its natural cooling system.

“The entire space is designed to be able to open windows on all four sides for airflow in the summer,” says Samuel Ebersol, general manager of Mid-Atlantic Timberframes, which provided all the precut timbers.

Coastal and rustic elements are bound together with details inspired by the Arts and Crafts movement. Each one represents the mastery of form and function.

A post-and-beam timber frame provides the structure’s bones. All the timbers are Douglas fir and are in the 8”x8” to 10”x10” range. Tapered collar ties and tapered chamfers add graceful, functional elegance. The king posts assert visual and physical strength, and each end is supported with a corbel.

“We were given orders to create something very unique and beautiful with the frame,” recalls co-founder and co-owner of B&D Builders, Daniel Glick, whose team built the structure. “We were given license to push the envelope.”

The great room ceiling soars up to 24 feet, and the interior 10-foot walls are covered in reclaimed chestnut from Pennsylvania barnwood in a custom, “souped-up” version of beadboard. Flooring throughout the main level and stairs is reclaimed white oak.

The exterior is topped with a copper standing seam roof, and the siding is made of cedar with a Sansin stain. The gables consist of cedar board-and-batten and live-edged Skirl siding below.

Anchoring the Arts-and-Crafts vibe are the chandeliers and kitchen pot rack made by B&D’s in-house blacksmith. The chandelier over the dining table is composed of fluted wood, while the other in the living room is constructed of metal. When light passes through the handcrafted artisan glass, it creates a marbled appearance. The blacksmith also handforged all the hardware and fixtures throughout the dwelling. In the kitchen, brushed green granite countertops and custom, handcrafted Douglas fir cabinets with a weathered green finish meld the Arts-and-Crafts elements with a rugged lodge look.

Fireplaces often take center stage in timber frames. This post-and-beam masterpiece doubles the impact with a captivating biophilic fireplace design and spectacular artisan stairway. The idea behind the stone fireplace was to create a pile of rocks in a cascading, organic form that spill over to establish an archway to the main stairway.

The stairway, itself, is a piece of art. Chestnut newel posts anchor a decorative railing and spindles in an alternating geometric form. Matching ironwork spindles are used in the spiral staircase that leads from the loft to the tower. Handcrafted, tapered pins hold the wooden, square-based pyramid endcaps of the staircase stringers.

Between the front, rear and primary suite porches and the second-floor balcony, there are 1,622 square feet of al fresco space for visitors to enjoy the fresh air and the views. Flooring on all the porches is Brazilian ipe.

“It’s a gorgeous place to hang out,” says Daniel.

Inside, a in-floor radiant heating system adds comfort throughout. Porch screens can be popped out for an ocean air experience or remain intact to capture heat during the winter. All the walls and roof paneling are constructed of structural insulated panels (SIPs) for energy efficiency.

“I love this build,” says Sam. “It’s an amazing piece of architecture that will last for generations.” 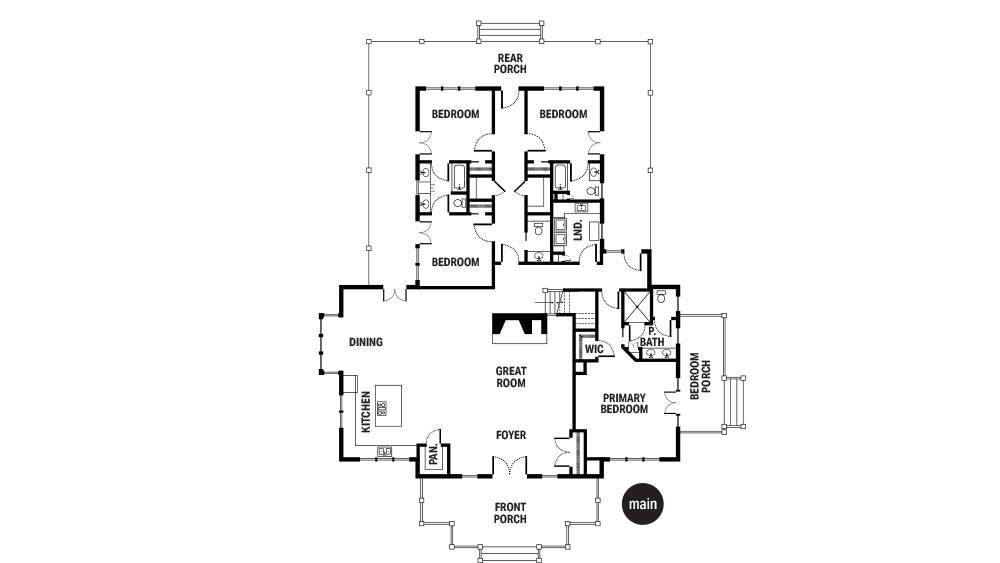