One lucky couple hits the jackpot with a well-designed timber home that’s just right for two. 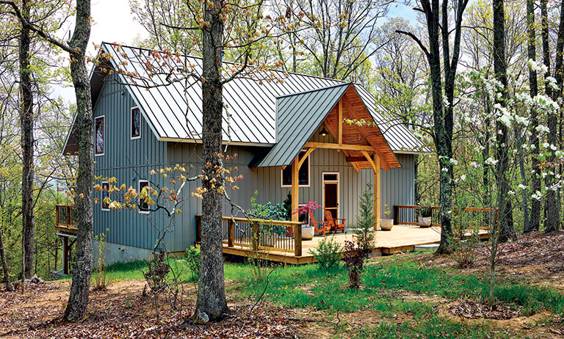 Every time Carl Stoesz walks through the front door of his small home in the heart of the Blue Ridge Mountains, he feels like he’s won the lottery.

“This place makes me feel like a millionaire,” he says of the 2,000-square-foot timber home he shares with his wife, Helen. Though modest in size, for Carl, the home is a childhood dream fulfilled. “As a boy, I grew up looking at books and seeing pictures of these old post-and-beam-style houses, and I just thought they were awesome,” he says.

After years of working as an engineer and living in the suburbs of Houston, Carl had long forgotten his boyhood interest. Then, as luck would have it, he came across an issue of Timber Home Living while browsing through a local home improvement store.


“As soon as I looked through the magazine, I thought, ‘This is it,’” he says. “It brought back all of those desires I had as a kid.” Right away, the Stoeszes began making plans to trade their 1950s rambler for a woodland retreat. While searching properties on the Internet, they came across a promising five-acre tract in southern Virginia. With views to the Blue Ridge Mountains and not another home in sight, both agreed it was the ideal spot to build their new home. “You turn down a dirt road onto our property and civilization just disappears,” Carl says.

Over the next two years, Carl and Helen modified the home’s design. Carl wanted a functional layout that didn’t waste space. Helen wanted the character of an older home with enough room for weekend visits from family. “We would obsess about the plans, then put them away for awhile before pulling them out and tweaking them again,” he says.

Eventually, they settled on an open plan with three bedrooms, two bathrooms and an upstairs loft that makes the most of exterior views. “We kept interior walls to an absolute minimum and focused on making sure things were airy and accessible,” Carl says.

The couple also opted to keep the timber elements simple.

“Even with straightforward lines, there is something awe-inspiring about the home,” says Sandy Bennett, owner of Blue Ridge Timberwrights in Christiansburg, Virginia, the home’s timber provider and general contractor. To lend a touch of architectural drama to the interiors and make the most of their square footage, the couple traded 4-foot gable dormers for 8-foot ones in the upstairs loft. “It’s a smart way to get more usable space for less,” Sandy says.

They also decided to tack on two additional feet to the length of the house after enlisting the help of designer Deborah Chevalier. “The extra space allowed us to rework the kitchen and make it even more functional,” she explains.   In the newly expanded kitchen — a space that now churns out “million dollar dinners,” according to Carl — the couple did everything they could to stay within budget. Helen installed the brick-inspired backsplash, while Carl taught himself how to make the concrete countertops.

“It was a process, working out how to color and polish them,” he says, “But, in the end we didn’t have to spend tens of thousands of dollars on our kitchen like some do.” Throughout the home, contemporary touches like the concrete countertops, streamlined furnishings and cobalt-blue accessories create a city-meets-country aesthetic when paired with oak timbers and rustic tongue-and-groove floors. “Our goal was to blend new elements alongside the wood,” Carl explains. “We’re really pleased with how it turned out.”

Though the hilltop home likely will never be truly finished — “Carl is always looking for new projects,” Sandy says — with most of the work behind them, the couple now spends their days enjoying their five-acres in the woods and the natural beauty of the home they have christened Dancing Oaks Lodge. “I wouldn’t change a thing,” Carl says. “I could win a million dollars and this would still be it for me. You just can’t beat it.”

Originally intended to be an enclosed space, the couple decided to open up the stairway to add visual impact to the entry and great room.

Alongside white cabinetry and warm wood floors, concrete countertops, stainless-steel appliances and a backsplash of recycled glass tiles lend a modern feel to the otherwise rustic kitchen. Above the bar, a soffit hides necessary ductwork and provides a convenient spot to store wine glasses.

Because the upstairs loft features a single-layer floor system, a network of chases, soffits and a utility closet had to be incorporated into the design to conceal ducts, pipes and wires.

A pedestal sink with hand-painted Talavera tiles in the guest bath was borrowed from the couple’s former Houston home. A small dresser provides smart storage for extra towels and linens.

In the master bedroom, a pair of French doors leading out to the back deck offer sweeping views to the hills beyond. “I can lay in bed and look out over my toes out to a nice view of the Blue Ridge Mountains,” Carl says.