Anatomy of a Small (and Smart) Timber Frame Home

At just over 2,000 square feet, this Colorado home showcases space planning at its finest.

The porch that wraps around the main level of the house is a true 3-season space, featuring double-hung windows that can come out in the summer and radiant heat floors for the colder months. The second-level vaulted ceilings are a result of the timber roof system, which lends a larger feel to the space without increasing the square footage. “The owners knew they wanted a timber home, but they left it up to us to tell them how to fulfill it,” says Adrian Jones of Frameworks Timber. The result was an oak-framed house with beetle kill pine floors throughout. White drywall was used to brighten up the home, but the red kitchen cabinetry adds a distinctive pop of color.

Open shelving frames the window in the kitchen to maximize wall space.

The main living room is modest but cozy, and opens up to the wrap-around porch for
additional living space.

The design team used every inch of available space in this house, including inside the wall systems where bookshelves were carved out. A stand-up shower and behind-the-door storage make this second-level bathroom
luxurious yet functional.

The porch that wraps around the main level of the house is a true 3-season space, featuring double-hung windows that can come out in the summer and radiant heat floors for the colder months.

Photos courtesy of Frameworks Timber
In life, we’re told not to sweat the small stuff. But sometimes, in certain special circumstances, it’s that small stuff that makes all the difference. “In small houses you have to get creative. You have to work a little harder,” says Adrian Jones, owner of Frameworks Timber in Fort Collins, Colorado. “You can get away with glossing over the details in a larger home, but small houses motivate you to use every inch of space to the best of its ability.”
That dedication to small-space planning is exactly what the Frameworks team focused on in this 2,235-square-foot timber frame located in Red Feather Lakes, Colorado — all with the term “cabin” in mind. “The owners referred to it as a cabin from the start, and even though ‘cabin’ can mean different things to different people, we created a design that’s reflective of cabin proportions in the way most of us would understand,” explains Jones.
To meet those small-house parameters, Jones worked with the owners to create a full timber-frame plan that was designed to fit in seamlessly with the surrounding landscape. The result? A more vertical structure that effectively uses 100 percent of the under-roof space and features a number of intimate, tucked-in areas, specifically on the second level. “The upstairs of the house wasn’t actually resolved until we got on site and completed the framing process,” says Jones. 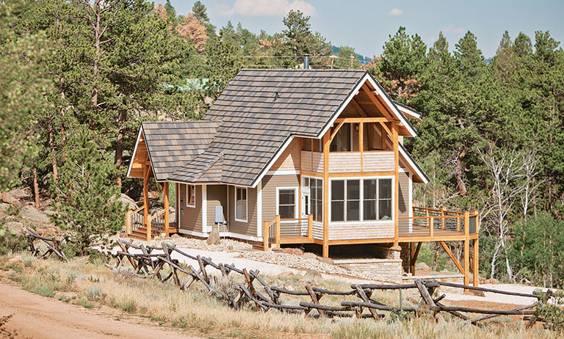 “Originally, the plans were drawn with full-height walls upstairs, but once we saw the frame in place, we decided not to bring them all the way up. This allowed us to find added space as we went.” Some of the stand-out space solutions found throughout the house include bookshelves that were actually carved into the wall in the upstairs bedroom; behind-the-door storage in the bathrooms; and Murphy beds in the basement that fold up into the walls to make the space usable by day. In the kitchen, open shelving visually opens up the room while still providing enough space for dishware. Shelving found along the sides of the kitchen island provides even more added storage.
The frame itself also helped give the impression of a more spacious house despite its small footprint. “Part of what we typically talk about when we’re discussing the advantages of timber construction is that the main level can be left open, while the timbers can help define living areas without having to put walls up,” Jones says. “Still, there’s an appropriate distinction of space, meaning we can design comfortable floor plans smaller with a timber frame.”
Perhaps the biggest accomplishment in this small home is the fact that it still manages to house two full bedrooms, three baths and a sleeping/play space in the basement — all perfect for when the owners are there with their young family. “The owner had memories of growing up in Canada and spending time outdoors, so he wanted to create the same type of place for his boys,” says Jones. “It’s because of that desire that we designed the house around their intentions to experience the property, and we achieved it all in an efficient, cabin-inspired home."
See also Designing a Small Timber Home Kitchen
★