A Simple and Spectacular Timber Home Retreat in Montana Responding to the site, architect Paul Bertelli had the home built around the view angle and the trees. Tucking it into the hillside allows for maximimizing space through multiple floors.

The reclaimed timber exterior gets additional support from Cor-Ten steel; when it rusts it adds a layer of protective coating.

“We love the intimacy of the living room,” say the homeowners. The practical size of the public and private spaces keep the rooms intimate in the open floor plan.

A commissioned Rocky Hawkins’ painting above the fireplace fits the Western vernacular that inspired the home. In keeping with the vision, the wood in the ceilings and walls is made from local reclaimed highway snow fencing.

“We sit here and watch the weather change a lot,” say the homeowners of their living room, which commands a view of Lone Peak, Fan, Pioneer and Sphinx Mountains

The homeowners found the dining room table while biking in Italy. “The dining room is the hub of the house and the table is usually covered with puzzles,” they say.

Built above the garages, the master bedroom offers a quiet sanctuary away from guests and public areas. The Victorian style bed is from Ralph Lauren. A standing tub helps capture the feel of the Old West. The old, hand-painted sign above the tub once hung over a shop in St. Louis.

Below the living room, a lucky guest gets this room with its spectacular view of Lone Peak. On the bridge above the kitchen and living room is a cozy nook for reading and for overflow guests (the denim-covered chairs fold out into twin beds).

Nearly every room has a mountain view in this hybrid home. “It’s a kind of like a ‘big hug’ up there since you have such an imposing view out the windows,” is how the owners describe their mountain getaway.

Responding to the site, architect Paul Bertelli had the home built around the view angle and the trees. Tucking it into the hillside allows for maximimizing space through multiple floors.

Written by Stacey Freed
Photography by Roger Wade
Styling by Debra Grahl
When you already lead a big, busy life, it’s nice to be able to retreat to a second home that’s intimate, inviting and — if you can swing it — maintenance-free. If that home commands a spectacular view so much the better. But how do you create a small-scale home that doesn’t leave the property looking underbuilt nor the house overwhelmed? By respecting the site and using locally sourced and reclaimed materials, much like this Big Sky home that looks and feels as if it is part of the natural landscape.
“Responding to site conditions is a powerful philosophy of ours,” says Paul Bertelli, design principle at JLF & Associates, Architects in Bozeman, Montana, who designed the 2,200-square-foot vacation home for one Nashville couple. “We hate to flatten out a site and build on top of it. Instead, we build around the view angle and the trees whenever possible.”

The homeowners found the dining room table while biking in Italy. “The dining room is the hub of the house and the table is usually covered with puzzles,” they say.[/caption] Tucked into a hillside — which allows for maximizing space through multiple floors — in the Summit View community, this home commands a spectacular view of Lone Mountain, a mecca for skiers. “The private and public spaces are all scaled to practical size, just what the clients need,” Bertelli says. “The scale of each ‘pod’ — garage, living room — is more human and more intimate. But at the same time, the various pods are connected into a larger whole with a sense of the exterior. 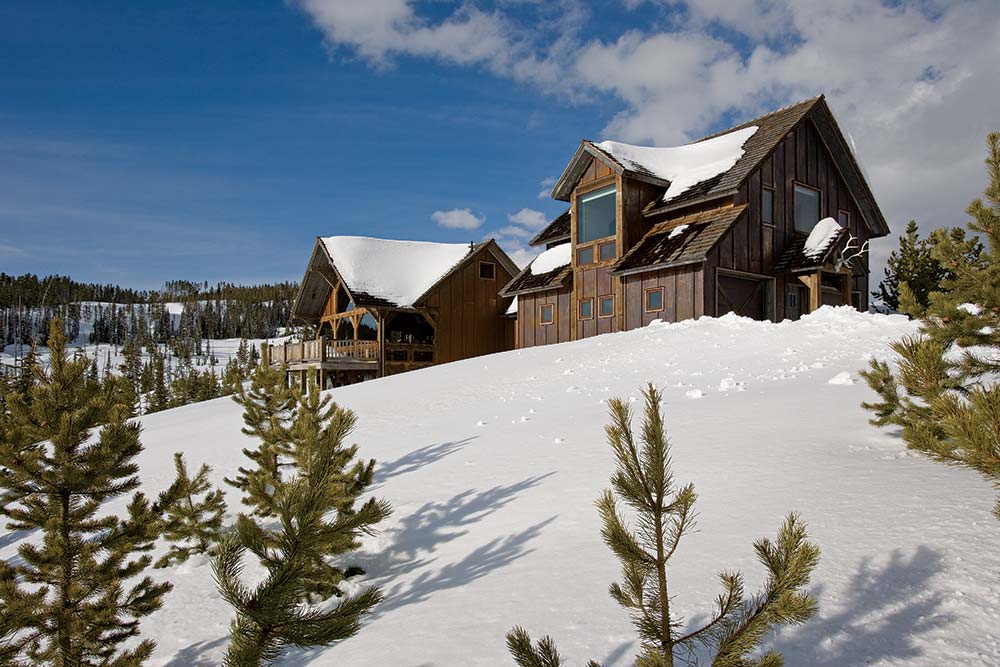 There also are more corners to the building, which brings more light from many directions,” making the home seem larger. The homeowners, a banker and a writer, fell in love with Big Sky after vacationing there over the course of several years. They bought land in 2000 and held on to it for three years before pulling the trigger on building. “We love architecture and we love the building process,” say the homeowners who have built several custom homes over the years. The couple wanted something “intimate, warm, and comfortable.” And since it is a second home, they didn’t know how much time they would be spending there. “We wanted to be able to lock the door and walk away from it.”

They found JLF, which works on a design-build model, after looking through magazines, making the rounds of local structures and through referrals. They were attracted to the firm’s use of old timber and reclaimed wood — a signature of its regionalist, vernacular style. “The region should affect the architecture in many ways,” Bertelli says. “Materials, weather, origins of the architecture — the less an architect responds to regionalism the more homogenous architecture becomes.”  Bertelli visited with the clients in Nashville and then communicated via email during the building process. He and his team spent a lot of time finding out how the homeowners live and what their philosophy is, their future expectations, and their design ideas as well as their budget, before setting pen to paper. And that worked perfectly for the couple, who say, “This was the easiest house we ever built. The architect and builders were such professionals.”


The home is a combination of conventional and timber framing. The exterior is made with wood and Cor-Ten steel as a “defense against nature up there,” Bertelli says. Not only is it strong, it rusts intentionally and that rust serves as a protective coating.


There are reclaimed materials in the building’s soffits and fascia, and the wood in the ceiling and walls is reclaimed from highway snow fencing. “It gets a nice patina over time,” Bertelli says, “and it’s a way for the state highway department to salvage old wood.” The way in which the homeowners wanted to use their home was an important design driver. 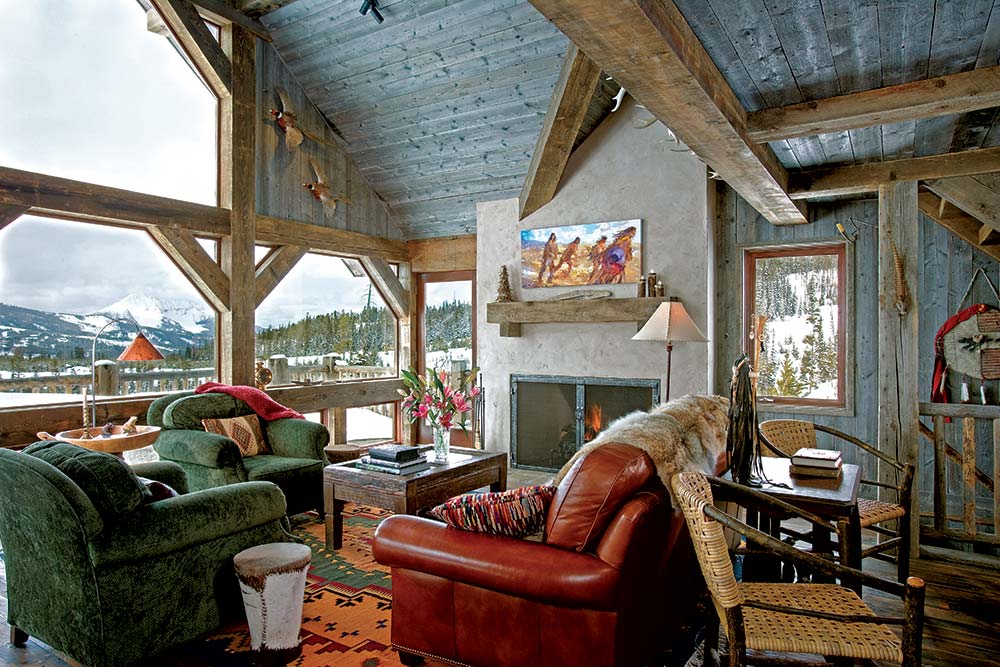 “Everyone loves being in the same space together,” says the homeowner. But, says Bertelli, people also need to have “space for privacy and solitude.” The design is practical and simple, with an open kitchen/living/dining plan for family gatherings, private spaces upstairs and away from the central hub, and guest quarters down below.

The homeowners didn’t have a need for game rooms and libraries; it was more about having easy access to a spot for unloading ski equipment, removing wet clothes and getting into a warm room for a cup of tea. What the couple did emphasize was the importance of materials versus square footage. “We wanted the absolute best materials to give the home an authenticity,” they say. Case in point, the century-old unstained, weathered timbers. They had to be fit with a little more skill than wood that has been smoothed and planed.

“The construction yard [OSM] has to fit pieces together, and scribe one piece to another, tracing the surface end of one beam to another so the curves and cracks are perfectly matched,” Bertelli says. “It’s an intensive process, but the difference is remarkable.” After a decade of facing the elements, the home is still as welcoming as ever, fitting both its site and the homeowners’ lifestyle. “We love it,” they say. “Even though we don’t get to spend as much time out there as we’d like to, it’s a state of mind — knowing it’s out there if we want to go. It’s become our happy place.”