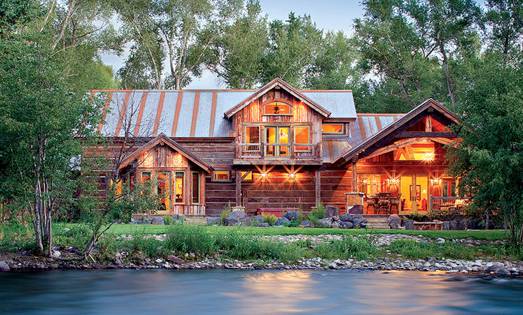 This stunning reclaimed timber home located along the banks of Colorado’s Gunnison River took some 20 months to build, but the house, built by Pike Builders of Gunnison, Colorado, is just the house the homeowners had always wanted: energy efficient, beautifully detailed and rich in reclaimed materials, and right on the banks of a premiere trout-fishing stream.

The finished 5,100-square foot, five-bedroom home is not only a comfortable seasonal retreat for the owners, but has plenty of room for their three daughters and spouses, six grandchildren, their own siblings and a long list of friends. The house is a true timber frame, what builder Steve Pike calls “old world style construction,” with a fully structural frame and infill walls built from 2-by-6-inch dimensional lumber. The yellow pine timbers used to make the frame were reclaimed from a North Carolina tobacco factory, Steve says. Pine siding and the mix of hand-scraped red and white oak flooring also comes from reclaimed sources.

In addition to using reclaimed lumber, the Pikes went to unusual lengths to give the house the unmistakable patina of age. The roofing, for example, is made from Core-Ten material that rusts over time to mimic the appearance of a century in the weather.

Even the elastomeric chinking between horizontal pieces of siding is a modern material that has been doctored to make it “look like an old farmer did it,” Steve says, with the addition of both sand and sawdust in a process the Pike brothers invented. But while the homeowners strived to make the house look as if it had been around for a while, the insulation and mechanical systems in this house are completely up to date. The roof is insulated to R-79 and walls to R-39 with soy-based closed-cell foam, Steve says, which helps to keep the house comfortable even in an area that can see more than 8,000 heating degree days a year.

The home’s heat is provided by a ground-source heat pump and a radiant-floor distribution system. Rather than dig wells or trenches for the heat-exchange tubing, the Pikes made use of a pond on the property that was so overgrown they didn’t even know it was there. “We cleared away the brush and trees, dug the pond out to a depth of 27 feet and installed miles and miles of geothermal coils on the bottom,” says Steve.

Homeowner Barbie Clariday credits the “unbelievable craftsmen” who work for the Pikes and designer Gail Lyons of Houston for the attention to detail on the interior of the house.

From the carefully fitted stone floor in the foyer to a wine rack perfectly scribed to the stone wall behind it, the house is a harmonious blend of materials and craftsmanship. And despite the rocky start, the house is doing exactly what the Claridays had hoped. Seven minutes from the airport and 20 minutes from a ski area in Crested Butte, Barbie says, “You feel like you’re out in the middle of nowhere.”

The foyer by the main entry is floored with stone that came from the builders’ nearby ranch. The massive stone lintel over the entrance to the foyer was set by a crane.

The open first floor includes this cozy fireplace area. The trusses and frame members were made locally from wood that was originally part of a North Carolina tobacco factory.

The kitchen island is made from knotty alder that’s been distressed and made to look as if it came from an old circular sawmill.

The comfortable master bedroom includes a walnut-paneled bump-out (to the left) with seating that overlooks the river.

A second-floor bunkroom includes eight bunk beds, capable of handling all six grandchildren at once with room to spare.

The large soaking tub in the master bath is made of copper, which exudes a warm feel against the matching tile floor.