An architect repurposes the past by turning dilapidated, old barns into a gentleman’s farm. 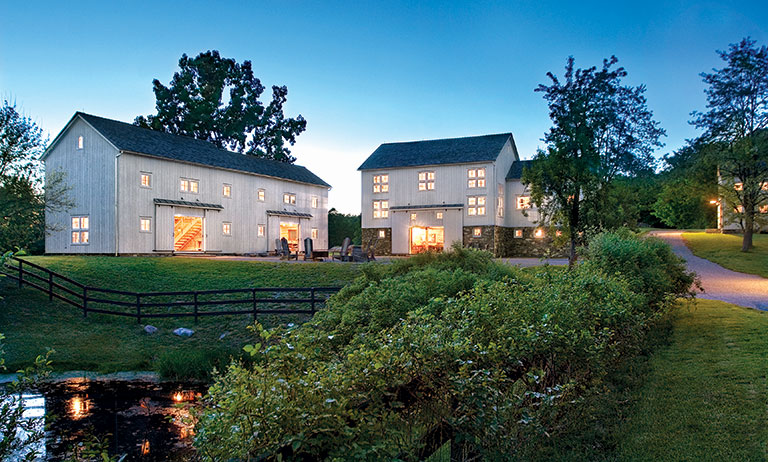 Jeff and Thelma Zwirn had dreamed of finding a weekend retreat for their family far from the fast pace of New York City. The idea of fulfilling this dream was heightened when Jeff lost many colleagues and friends during the 9/11 attacks at his place of employment—Keefe Bruyette & Woods—a securities firm in the World Trade Center. (Thankfully Jeff was suffering from a seasonal cold and was late for work that day.)

“After 9/11 Thelma and I wanted to take our dream off the back burner and put it on the front burner,” says Jeff. He reached out to architect Paul Gleicher, who had worked with the couple on their primary residence just outside New York City, for advice on where to look for a country retreat. Gleicher suggested Millbrook, New York, a bucolic town tucked into the rolling landscape of the Hudson Valley—just an hour and a half’s drive from the city but worlds away from its frenzied lifestyle.

When a 40-acre estate once owned by composer Marvin Hamlisch came up for sale in the area, Jeff immediately made an offer. Once a dairy farm, the exceptional piece of land dating to 1839 had an antique farmhouse and four substantial barns. Although the barns were in disrepair, Jeff and Thelma had a vision of creating a gentleman’s farm. “We wanted to create a family compound, using the barns for gathering spaces and guest suites,” notes Jeff, who fittingly named the property Four Barns Farm.

Working within the footprint of each original barn, Gleicher began designing the four buildings. “Although the barns would take on different functions, we wanted a cohesive look between them,” says Gleicher, who introduced the same siding, roofing and foundation materials and architectural design elements to each barn. The main barn, measuring 66 feet long by 32 feet wide, was the first he tackled. Although its roofing, siding, and foundation were unsalvageable, its original hand-hewn oak timber framing was in good shape. “The main barn would become a living area for guests to congregate, but we also wanted keep the historical look and feel of the original barns,” says Gleicher. The old barn was stripped of its rotting envelope, lifted, and set on a new fieldstone foundation. In order to make the new barn weather-tight, Gleicher created a thick sandwich wall, which allowed for a blanket of insulation as well as space to hide ductwork. The doors to the barn, which are paned-glass French doors, slide into the wall cavity. A large wooden rolling barn door on the exterior protects the glass from the elements. “I like using sliding and pocket doors,” notes Gleicher. “They add to the clean, simple look and are also great space-savers.” The exterior was clad in vertical cedar siding and stained a weathered gray.

Jeff and Thelma loved the look of the hand-chiseled ancient beams so Gleicher kept them exposed to allow for a strong architectural design element in the space. Although the ceiling soars to 35 feet, Gleicher brought the interiors to a more human scale by introducing reclaimed horizontal oak boards to the lower portion of the interior wall and a reclaimed vertical oak board to the top portion. “The placement of the boards breaks up the walls visually,” notes Gleicher. Wherever possible Gleicher introduced reclaimed materials such as the pine flooring. An open hallway and cable railing runs the perimeter of the second floor. Used for a play area for children, the space is kept open to the downstairs to keep children and adults connected.

Filling the “barn” with light was critical to create the inviting spaces Jeff desired. Gleicher chose two-over-two mahogany awning windows set in a deep sill. “I liked the clean look of the awning,” notes Gleicher. The architect grouped several windows together at the gable ends to flood the space with light. A massive local fieldstone chimney takes center stage in the rustic lodge. The stone has a recessed mortar joint to give the appearance that it was dry stacked. The same treatment is given to the fieldstone foundation. Aside from a large sitting area, the main barn also has a kitchen and dining area. These areas have lower ceilings allowing for a bit more intimacy.

The second largest barn’s timbers could not be salvaged so Gleicher worked with Riverbend Timber Framing to create the post-and-beam frame to take the place of the original. “We had an old-fashioned barn-raising,” notes Gleicher. The smaller buildings—a studio for Thelma, who is an artist, and a garage all take on the vocabulary of the main barn. A gravel courtyard in the center of the barns offers an outdoor common space for guests to gather when the weather cooperates. “We love going to the farm on the weekends—or whenever we can get away,” notes Jeff. “The way I honor my friends who lost their lives on September 11 is to live my life to the fullest every day.” And time spent with friends and family at Four Barns Farm is a big part of that. The main barn’s living space is open and airy. Windows flood the massive room with light. Locally quarried stone was used for the massive fireplace. The mortar is recessed to make it appear as though
the stones had been dry stacked. The second floor loft is reserved for games. Wrought iron chandeliers are in keeping with the rustic charm of the buildings. Antiques were introduced from the homeowners’ antiques shop—Millbrook Antiques Mall. The ceiling is lower in the kitchen and dining space to provide a cozy atmosphere. The windows and French doors are framed in mahogany. Sliding interior barn doors are a great space saver in the layout. The property, several undulating acres, was possibly a quarry at one point that had been filled in and taken over by grasslands. The courtyard is an open-air living room for guests.

The main barn’s living space is open and airy. Windows flood the massive room with light. Locally quarried stone was used for the massive fireplace. The mortar is recessed to make it appear as though
the stones had been dry stacked.