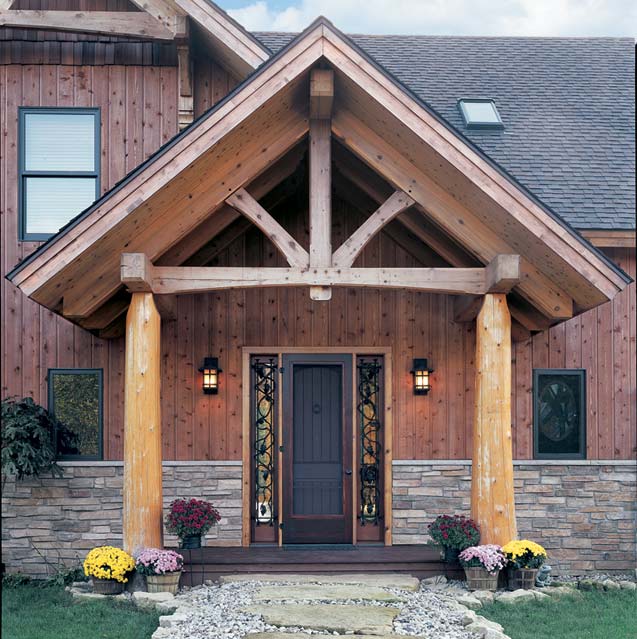 This timber home has a Western mountain style design.


Ramble about 40 miles west of the university town of Madison, Wisconsin, and you’ll happen upon a 300-acre conservancy where rugged terrain, heavily wooded hillsides and towering rock cliffs dominate the landscape. And somewhere in the middle of that beautiful, untamed area sits a timber home that’s been two decades in the making … And it shows.

“I always wanted this piece of land as a home site, because it overlooks my grandparents’ land,” says Mike Van Sicklen, who resides in the home full-time with his wife, Susan. “We bought the land 20 years ago and spent all that time landscaping it to incorporate nine miles of mowed trails for hiking and skiing, two streams and a small pond.”

With the plot poised and ready for its dream home, the Van Sicklen’s considered their options. The duo looked into log homes, earth homes and traditional construction before deciding on a timber home that would “match really well with the surrounding forest,” says Susan. After traveling to Canada to meet with two different timber home manufacturers, the Van Sicklens began working with Ontario-based PineRidge Timberframe and architectural firm Bauhaus Designs out of British Columbia to design their home. In order to take advantage of the stunning vistas, the home features a three-story, curved turret and a second-story sleeping porch.

The great room was designed with 30-foot-high ceilings and a southern-exposure window wall, which transmits the most amount of solar heat during those frigid Northern winters. In March 2005, PineRidge delivered the custom timber home package to the site. The four-bedroom, 3 1/2-bath home is made primarily of white pine, with Douglas fir for heavy load points and decorative cedar roof features. Post-and-beam framing with mortise-and-tenon joinery was used throughout the home, along with chamfered edges and radius braces to add visual pizzazz. Traditional Carpentry Inc., a local company, handled the interior finishing, including some personalized decorative elements like the large, oval stained-glass window in the master bathroom.

The home was completed in May 2006. “The owners wanted a Western mountain flavor incorporated into the design, so we used many of the different features that they’d seen in other homes and that the architect suggested,” says Mike Mader, president of PineRidge, which has been in business for 19 years, selling approximately 30 timber home packages annually. Mike and Susan are particularly fond of their screened-in, second-floor porch, where they “like to sleep when it’s not 10 degrees below zero outside.”

Coyotes and owls provide a natural soundtrack that helps the pair quickly forget the hubbub and stresses of the preceding day. A white pine tree harvested from the surrounding land extends from floor to ceiling in the room and reminds the couple of just how special their timber home is. For not only is the home situated on land Mike’s family has owned for three generations, it’s also situated in the Wisconsin’s Driftless area—a small corner of the state that was missed by the glaciers that flattened much of the Midwest. Located high on a hill overlooking two picturesque valleys—with no other structures or fields within site—the three-story abode serves as the perfect backdrop for entertaining, outdoor activities and relaxing.

“We love the openness and the seasonal views from our home’s various vantage points,” says Susan, who handled the interior decorating, opting for a part-country, part-modern approach to the decor. “Sometimes I feel like I’m sitting in a log cabin in Colorado instead of in Wisconsin.”
★

Hand Hewn: The Traditions, Tools, and Enduring Be…
Shop now at Amazon.com