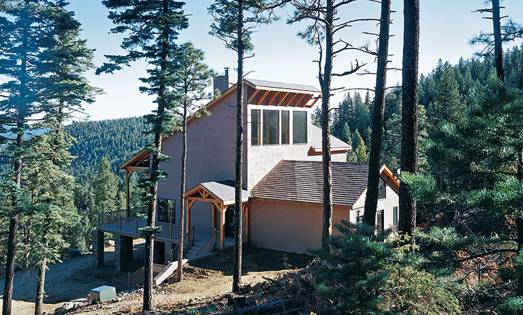 Conventional wisdom says that action is always better than inaction. But sometimes, being passive actually can be a good thing. This idea is especially true when it comes to designing a home that takes advantage of the best energy source there is — the sun. Jim Lee first learned about passive-solar design while studying engineering in college in the 1960s. The notion of orienting a building to maximize its ability to capture and store heat — no solar panels here — struck him as eminently practical: "It's a very simple concept that made sense to me."

So several years ago, when Jim and his wife, Carol, decided to trade their home in northern New Mexico's Pendaries Village to build one with a more expansive view in the nearby Sangre de Cristo Mountains, trying out the theory was priority number one. "The decision to go with timber-frame construction followed naturally," he says. "It gave me the ability to create a large, open structure that responds better to passive-solar design." Working with architects at Hearthstone Inc., a log- and timber-home provider, the Lees came up with a plan that seamlessly incorporated south-facing windows, properly sized overhangs (to keep out the sun's rays in the summer) and other elements, such as slate flooring to absorb and disperse the solar warmth, needed to provide most of the home's energy needs.

Supplementing the solar-generated heat are radiant floors and a Tulikivi fireplace made of soapstone, which naturally soaks up the wood-fired heat and releases it slowly into the room. At 8,000-foot altitude, air conditioning isn't necessary.

Building the home took about a year and was largely glitch-free, thanks to a couple of Hearthstone experts who were onsite for the first few weeks to guide the general contractor on the timber frame's erection. Jim also credits Hearthstone's precision for the easy construction process: "As a civil engineer, I was amazed at how precise all of the cuts were; everything fit together remarkably well."

See also What Designers Wished You Knew Before Building

The frame was built primarily of oak, while the exterior porches comprise eastern white pine. A copper roof shields the house from snow loads — a theme that is carried throughout the house in other copper accents, including the outdoor fixtures. The interior design was spearheaded by Carol, who blended new furnishings with those from the Lees' previous home for a welcoming, ski-lodge look. Today, Jim spends part of his time in Phoenix, Arizona, where his engineering business is based, but considers this 3,500-square-foot masterpiece home.

With four bedrooms and four baths, it easily accommodates family gatherings and the occasional ski weekend for the couple's three grown sons and eight grandchildren. The house's design is entirely handicapped accessible (one of their sons uses a wheelchair), including an elevator that goes between the lower level, where the garage and home theater are, and the main level — features that will serve the couple well as they grow older.

For now, though, Jim spends a good bit of his time at home in his loft office, which overlooks the valley to the north. Great views abound all over the house, including the kitchen. "It makes dishwashing seem not so bad," he jokes. On summer evenings, he and Carol regroup on the deck to watch the hummingbirds and the sun set over the valley. But even in bad weather, there's no place they'd rather be, Jim says. "We really like to get here before a snowstorm and hunker down, so if it snows 4 feet, that's OK."

The decision to build a timber home gave the Lees the ability to design an open structure that responds better to passive-solar design. The great room’s Tulikivi fireplace is made from soapstone, which naturally soaks up the fire’s heat and releases it slowly into the home.

Slabs of thick granite were used for the kitchen counters to balance out the home’s big timbers. Slate tiles were chosen for the floors to absorb and release the solar warmth.

The dining room set complements the oak and eastern white pine timbers used throughout the home.

The use of white drywall, as well as different types of light fixtures, brightens up the interior spaces of the home.