A unique condo project at Montana’s Flathead Lake melds the look of a modern mountain lodge with Old World style.

Take a trip to the great northwest, and you’ll find that there are plenty of timber-frame lodges in Montana. But the architect and builder who developed a cluster of buildings on Flathead Lake not far from Glacier National Park wanted to take that popular lodge aesthetic and add a bit of a twist. Architect Keith Beck calls it “Old World mountain flavor,” while general contractor Ron Incoronato refers to the style as “Old World European mountain village fusion vernacular.” Whatever label finally sticks, it’s safe to say the project won’t be confused with mainstream custom-wood construction in the region. 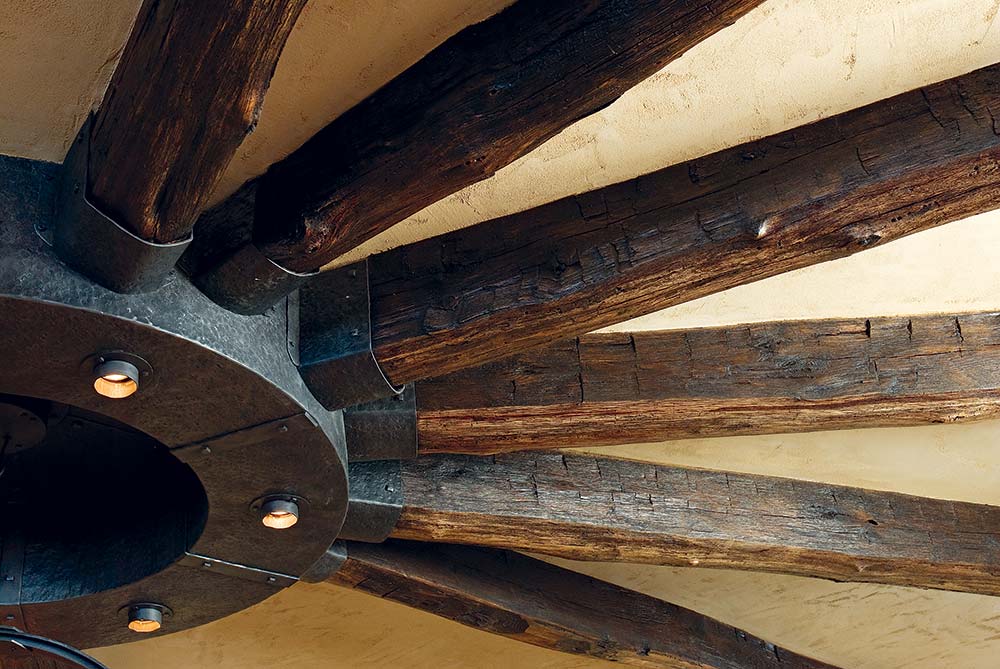 Beck and Incoronato were collaborators on the design and construction of the project, which consists of three buildings that house a total of nine condominiums, ranging in size from 2,200 to about 4,000 square feet. The compound, dubbed Bear Dance Village, replaced a cluster of rental cabins on the edge of the Swan River where it meets Flathead Lake, an area of stunning natural beauty. When the manager of the cabins retired, the owner of the property decided to clear the site and build condos. He saw an earlier project that Beck and Incoronato had worked on, and that swung this job their way. It was, in Beck’s words, a “once in a lifetime project.” 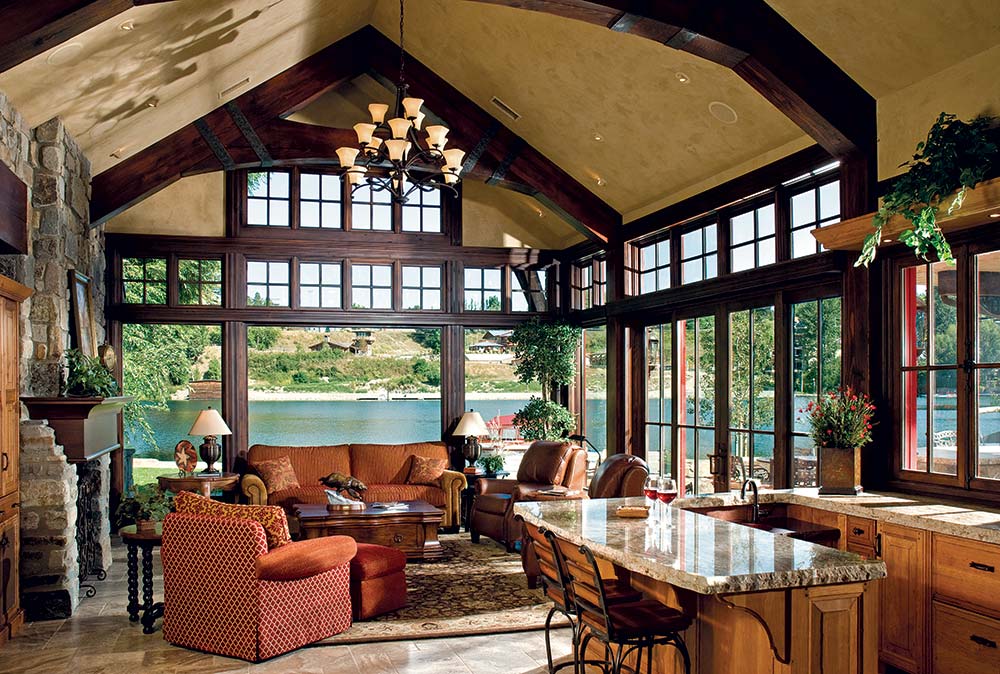 Views of the Swan River as it enters Flathead Lake are an essential element in all nine units. The exposed beams, some of them structural, are a mix of old and new material.

Deciding on a European-influenced architectural theme was one thing, but actually constructing the project would pose formidable challenges. Not only was the lot narrow, which constrained the size and orientation of the buildings, but the ground itself proved problematic. 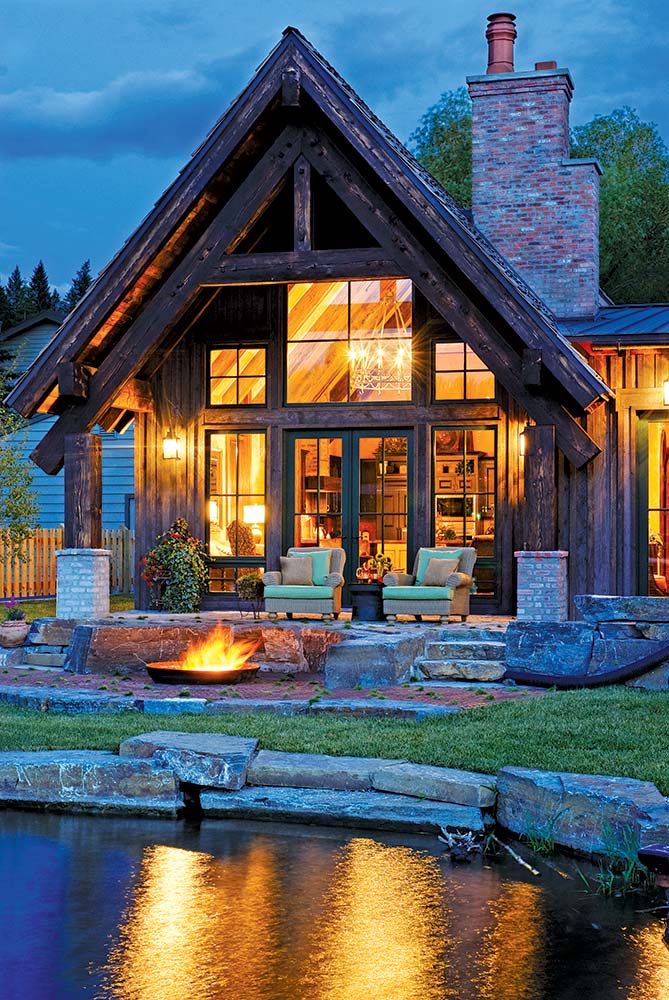 Individual porches and outdoor areas make each unit feel like its own separate home.
A soils engineer concluded that beneath a relatively thin layer of glacial till lay a thick layer of sand. Because of a high water table, and because the site is located in a seismic zone, the buildings would have to be reinforced to prevent catastrophic damage in the event of a quake. The solution, says Incoronato, was to sink 123 pilings through the sand and anchor them to bedrock, in places 120 feet down. The supports are actually sections of 8-inch well casing welded together and later filled with concrete.

On top of this supporting framework, 16-inch-thick grade beams reinforced with steel support the buildings. The lot’s narrow footprint also posed its own share of challenges. “The problem I had initially with designing it was how to get nine units on there and keep the waterfront view,” says Beck. “The lot is so narrow and long.” His unorthodox approach was to design a drive-through building at the back of the lot housing five condos, what he and Incoronato call a “five-plex.” The access road through the ground floor of the building leads to two duplexes closer to the water, all of them arranged to preserve water views.

See also A North Carolina Timber Home is Worth The Wait

There are some unifying architectural elements common to all three of the buildings, including stone and brick work, heavy wooden timbers soda blasted for texture and dyed a deep brown, and detailing aimed at making the buildings look like they’ve been around for a long time. “We tried to go to the extreme to make things look old,” says Beck, “as if the buildings had a little bit of settling or character to them, and we used multiple kinds of stone on the project to make it look like the buildings had been added onto over the course of time.”

While each of the nine condos feature similar architectural elements and finishes, they each have a unique floor plan, along with different door and cabinet styles and different trim profiles, so no two are alike. “It’s not like designing a particular house or a building,” Beck says. “It was designing nine different buildings and making them mesh.” That’s one of the reasons the project took five years to complete, even with as many as 50 subcontractors on-site at any one time. Incoronato says many of the design decisions were made by a committee that included Incoronato and his superintendent, Beck, an interior designer and key subs. “We were designing right up to the very end,” he says. “It was a work in progress.” 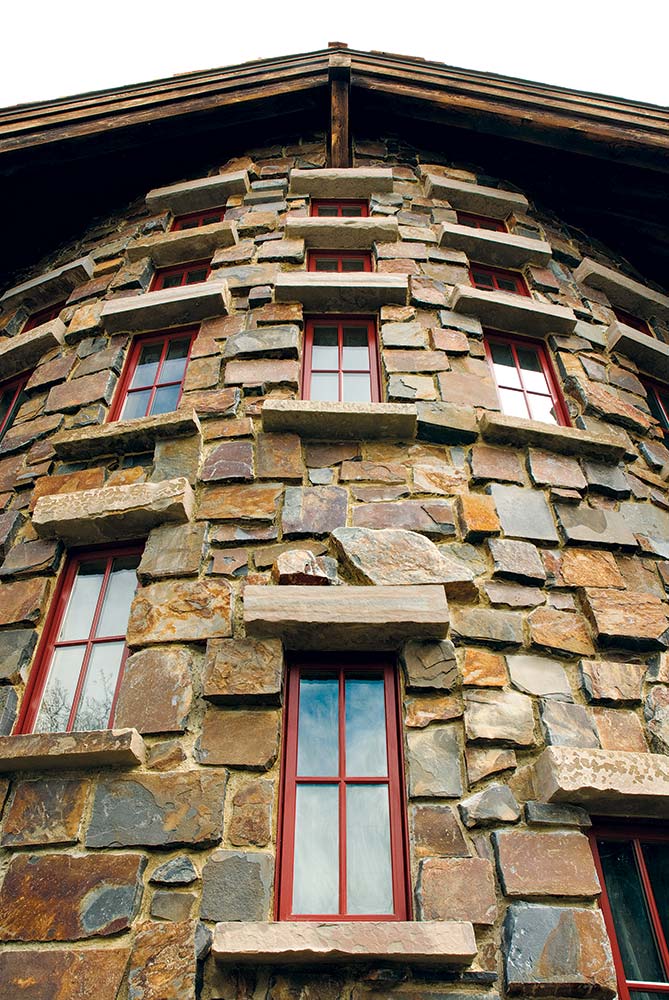 From a distance, the Bear Dance Village looks like one cohesive structure, but take a closer look and you’ll see that it’s actually broken up into nine separate condominiums, and each comes complete with its own features, finishes and amenities. This tower, for example, is actually an elevator shaft that provides access to a rooftop patio on the largest of the three buildings. What’s more, this exterior focal point serves as the perfect place to showcase the finishing details that make this project so special.
While the detailing may help the buildings look old, the insulation and mechanical systems are designed for contemporary comfort. Construction techniques on the project include wood and structural steel framing, spray-foam and flash-and-batt insulation, and double-glazed windows.

Gas boilers provide radiant-floor heat, with air conditioning and supplemental heat coming from air-source heat pumps. A separate system provides heat for all walking and driving surfaces, eliminating the need for snow removal in winter. The boilers are housed in concrete septic tanks, detailed to look like underground root cellars. “The whole project, right down to those little details, was really fun,” says Incoronato.

A mix of stone, brick, mortar and board-on-board siding was created with intentionally uneven joints to give the walls (both interior and exterior) the feel of many years of service and repair. This combination of finishes also adds visual appeal and interest to the structure’s exterior, further distinguishing the separate residences.

General contractor Ron Incoronato recalls talking to the masons on the project and trying to explain why their usual method of laying up brick and stone wouldn’t work. “No, we don’t want that look,” Incoronato says he told them. “We want it to look real sloppy — joints not raked and lots of little filler pieces. Some of them said, ‘Well that looks like some high schoolers did it.’ And I said, ‘Do we have to hire some high schoolers or can you do this?’ And after a while, they really got into it.” This attention to detail — or lack thereof — helped create the Old World feel the design team was going for. 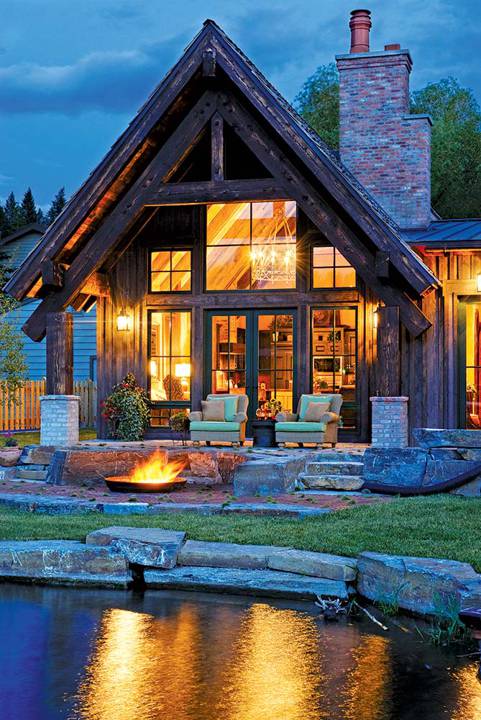 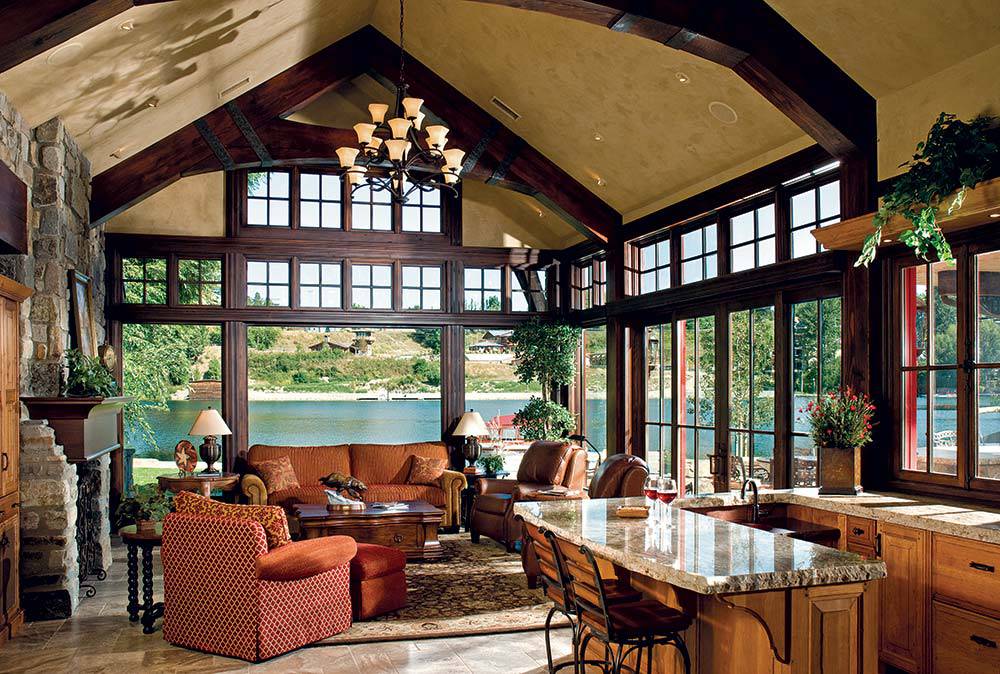 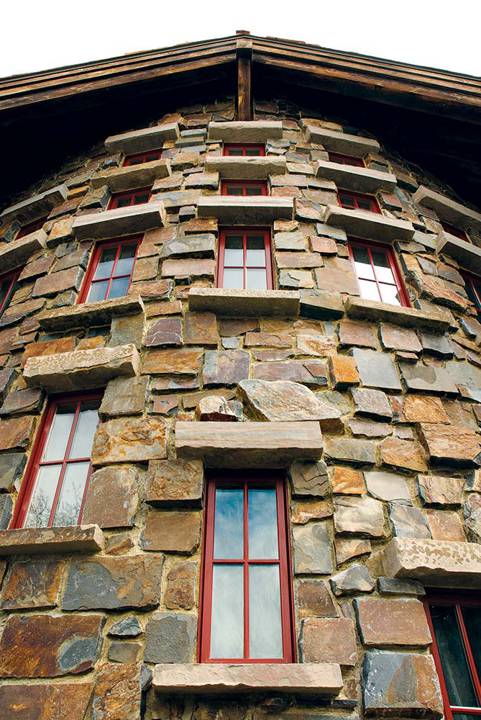 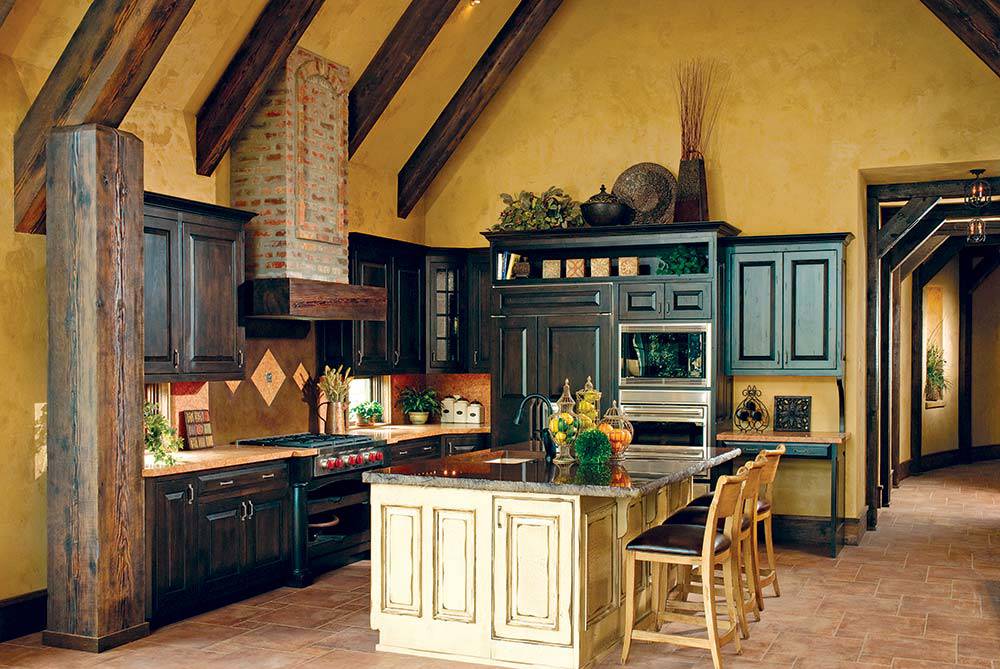 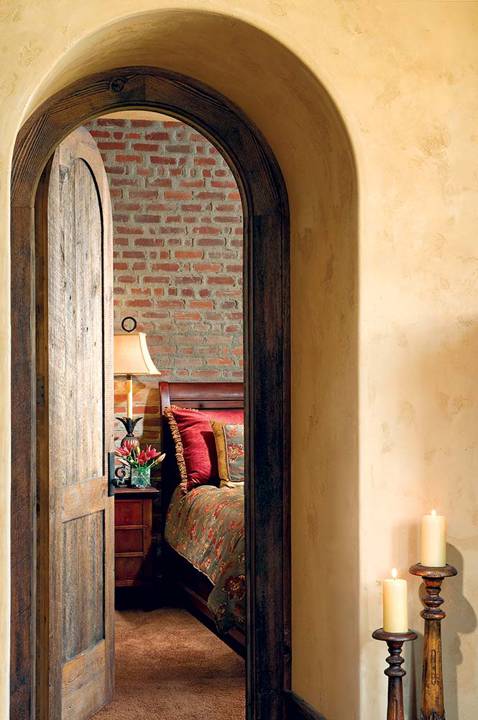 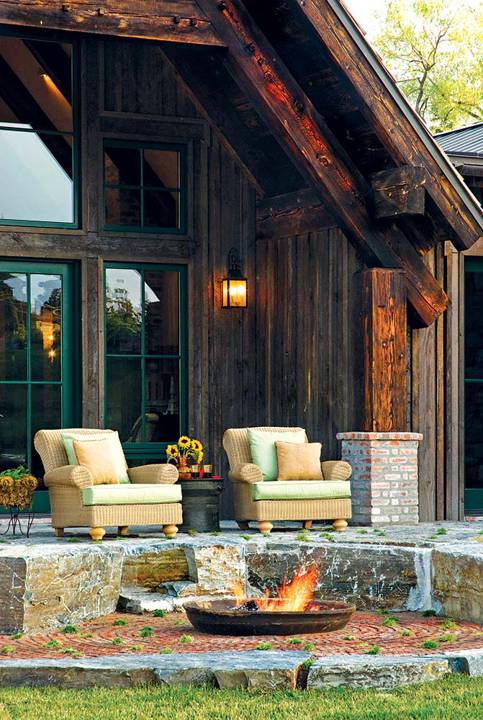 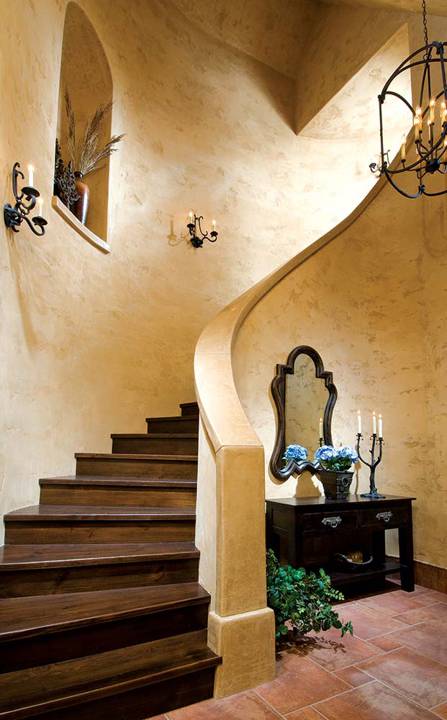 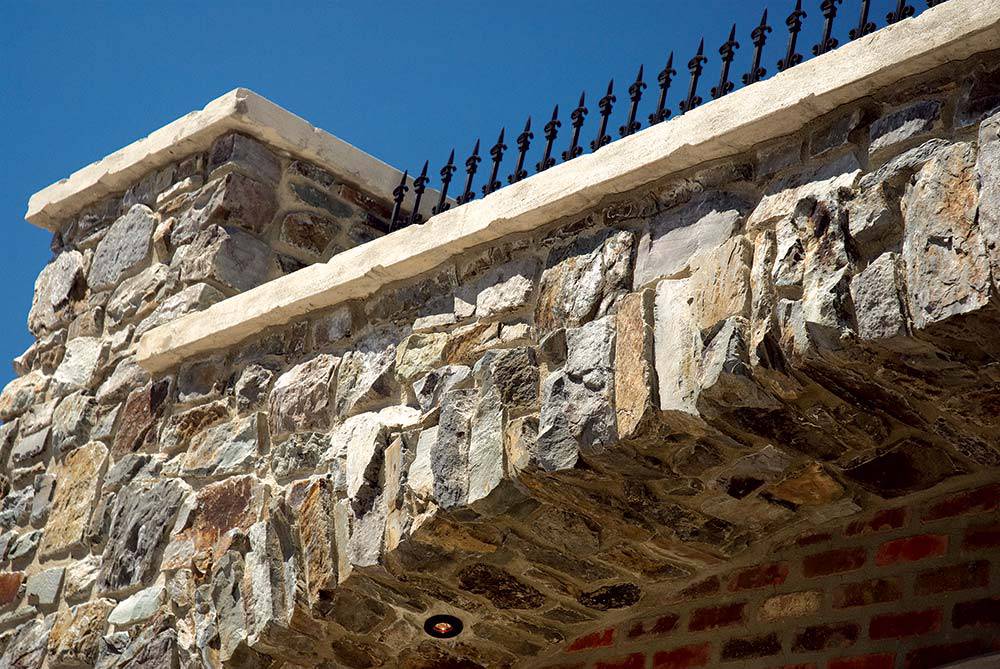 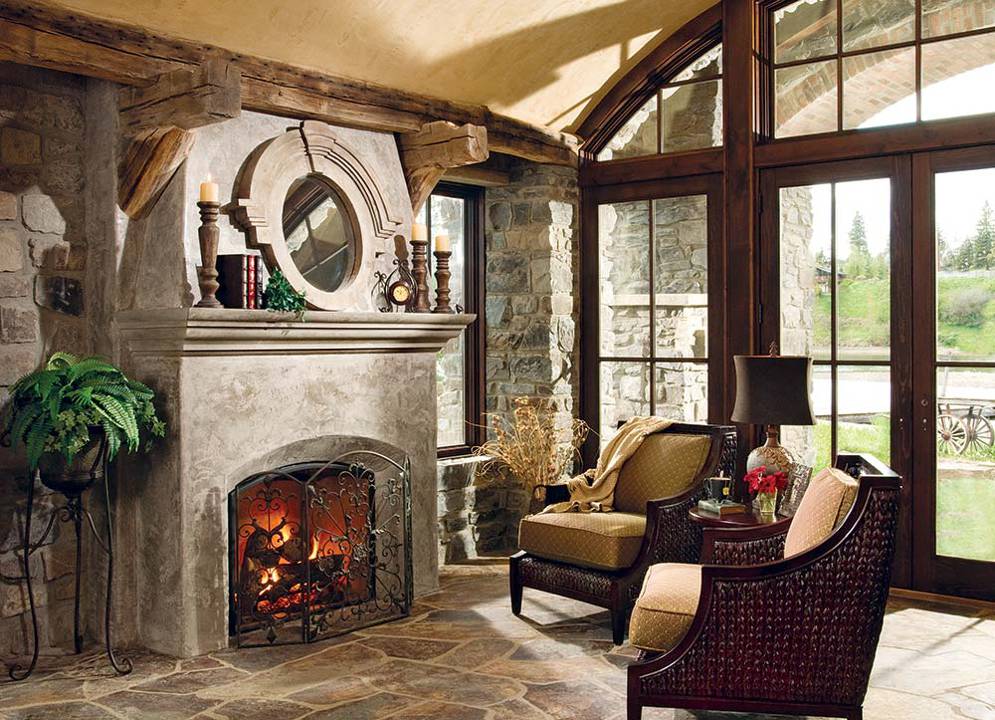 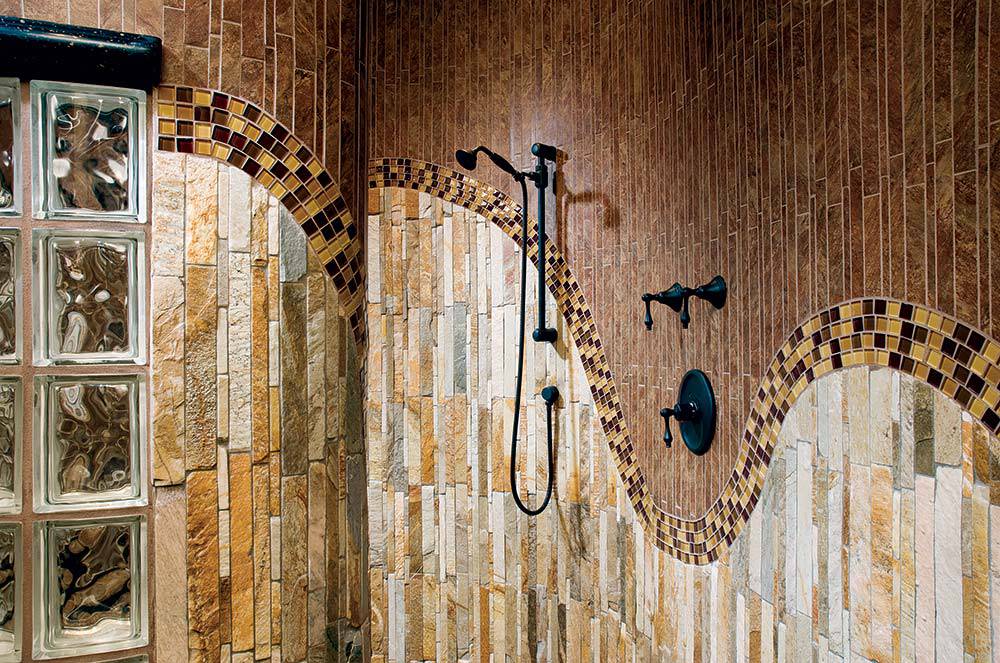 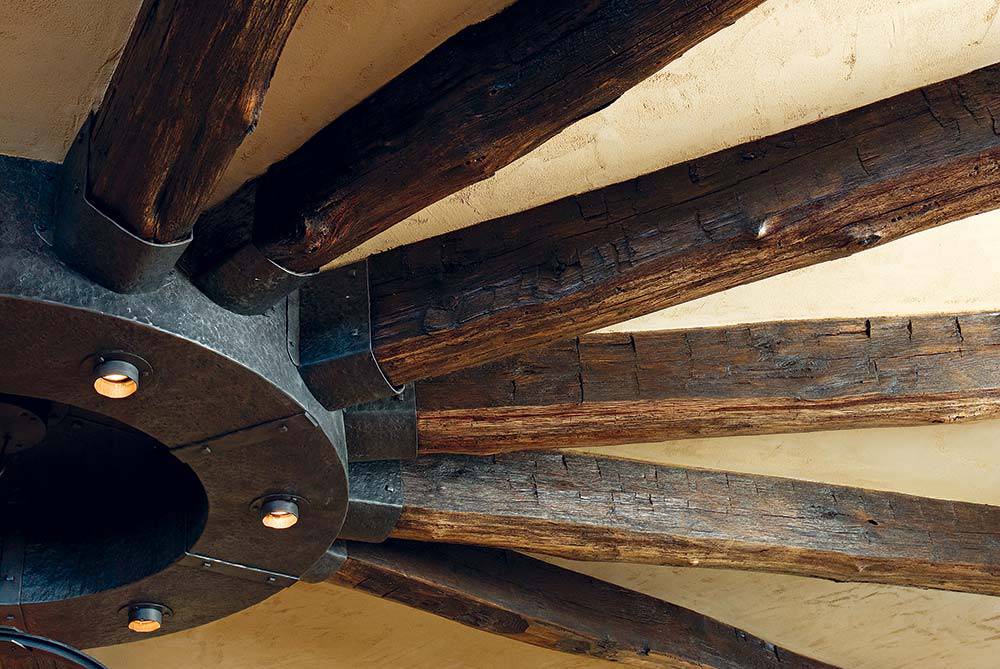