A beautiful waterfront setting serves as the backdrop for a Montana hybrid home. 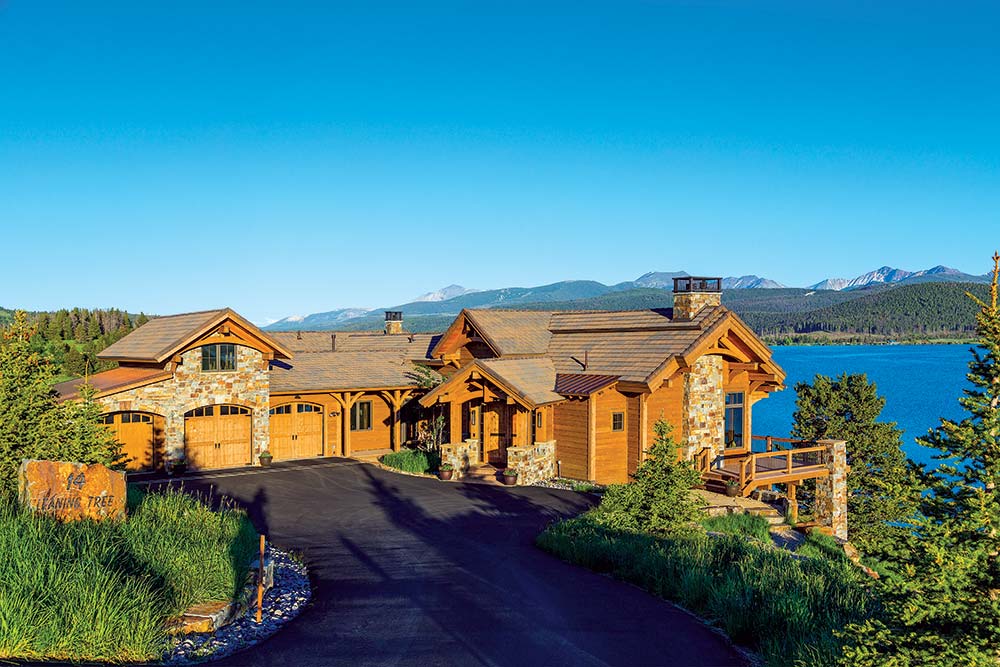 Architect Reid Smith has a friendly bet going these days with Wayne Hale: Which one of them will be the first to haul in a trout from Georgetown Lake with a cast from Wayne’s deck. 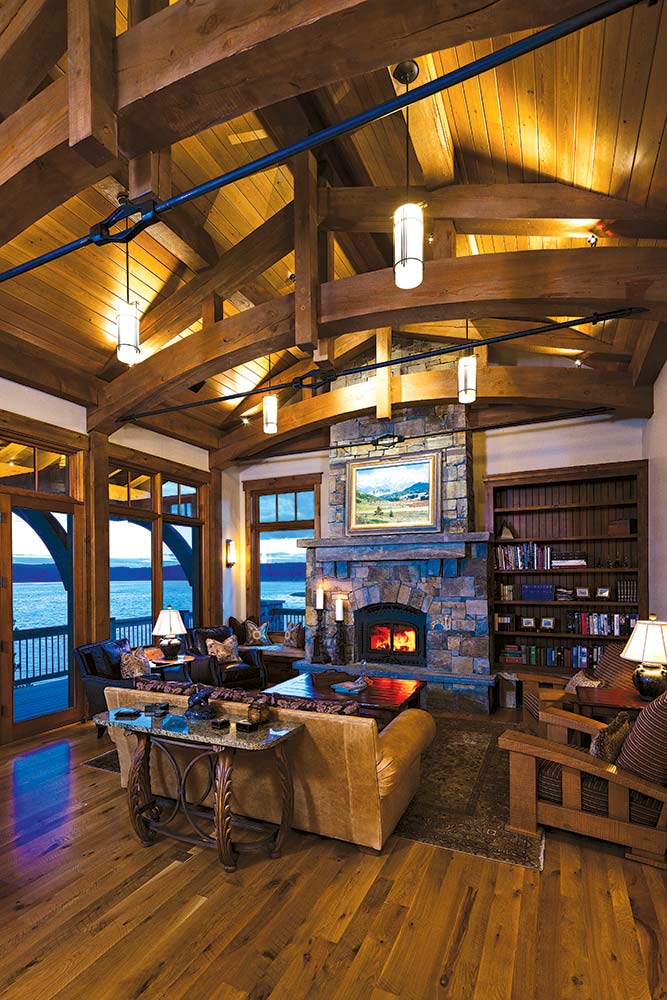 A fireplace anchors one end of the great room. Timbers throughout the house are standing-dead Douglas fir; floors are lightly-stained white oak.
With the right rod, Smith thinks the lake may be close enough. Wayne doubts it. But even if neither of them collects on the wager, the lake below Wayne’s mountain property provides a spectacular focal point for the stunning timber home, and access to it was a key feature of the home’s design.

Georgetown Lake, located in southwestern Montana, isn’t the biggest lake in the state, but Wayne says it’s the third highest trout-producer.And with it comes opportunities for year-round outdoor recreation. Wayne heard about the property through a business connection when he was working in Moscow. After tracking down the listing agent, he made arrangements to fly in and have a look. The unspoiled, undeveloped property appealed to both he and his wife, and they bought it on the spot. Smith was one of four architects invited to bid on the job. After visiting the then-undeveloped site, Smith asked to return at dusk for a better idea of what it had to offer — and that extra effort was enough to swing the job his way. “

We found that quite impressive,” Wayne says. “We met him there at sunset and we just went out to the lot and sat in the middle of it and took in all the sights.” The finished house has roughly 5,000 square feet of living space, including three bedrooms, an office, an exercise room and a game room. It was completed in 2010 after 15 months of construction under the direction of builder Peter Lee of Teton Heritage Builders in Gallatin Gateway, Montana. 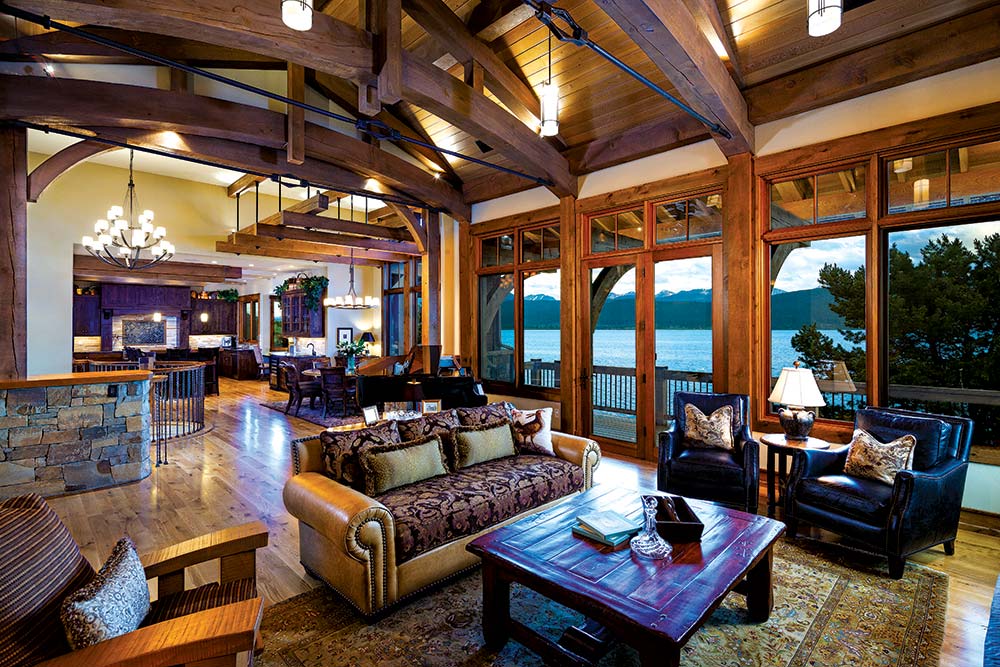 Architect Reid Smith turned the entry to a 45-degree angle and accentuated it with a curved overhead timber. The idea was to make the entry a welcoming element as visitors approach the house.
The hybrid home combines some structural timber elements with conventional stick framing, a method that captures the appeal of traditional timber framing but is more economical than a full timber frame. The house has two levels. Smith located the great room, kitchen and master suite on the upper level, and placed the other bedrooms and recreation space on the lower level. The long axis of the house runs east to west, giving the great room and master suite sunny southern views toward the lake. 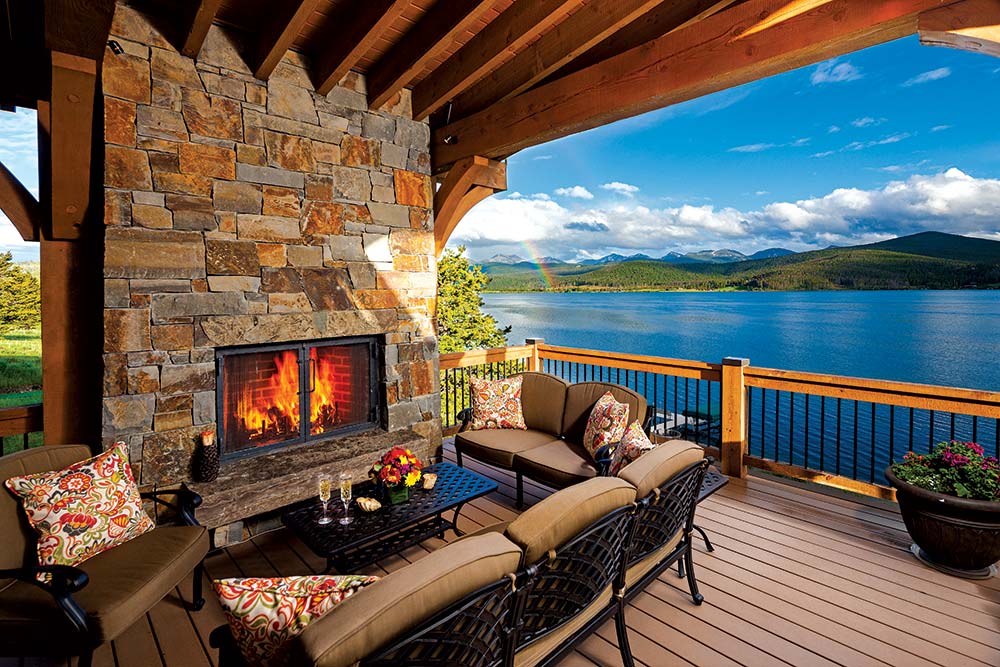 A door from the kitchen leads to an outdoor deck with its own fireplace and grill area. “The relationship to the kitchen is key,” Smith says. While the outdoor views are certainly stunning, Smith says he was equally concerned with the views within the house. “I always think of internal views,” he says. A fireplace anchors one end of the great room, and Smith balanced that in the kitchen with a large range hood at the end of the room. A grid of timbers over the kitchen and dining area help define those spaces even as they remain connected to each other through the open floor plan. 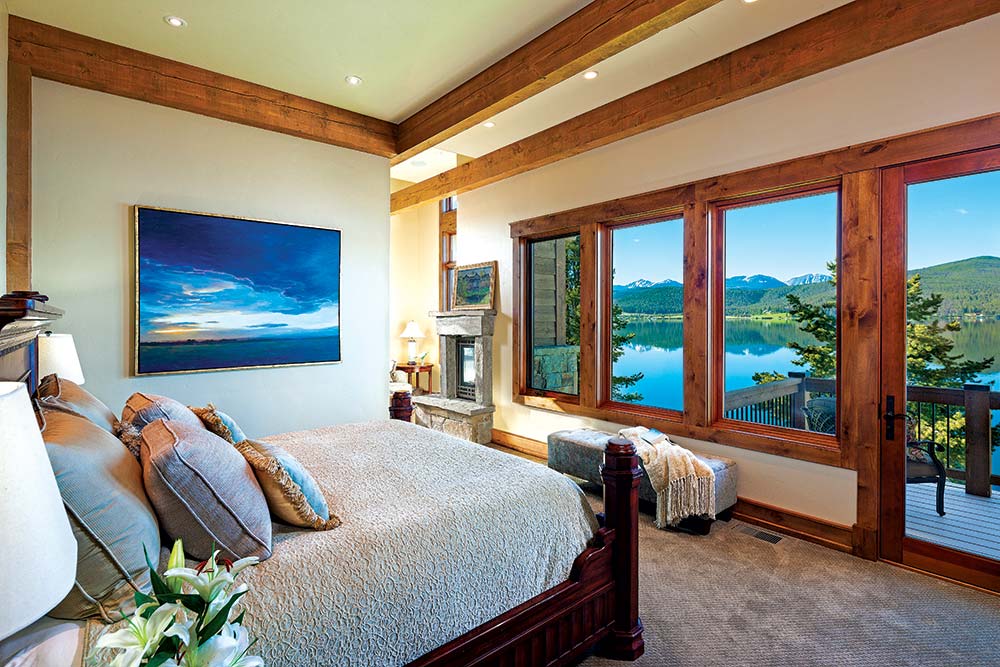 “These days it’s all about open living,” he says. “We’ve got these spaces that are adjacent to each other, and I feel you still need to define them.” Timbers, he adds, also were used to mark critical junctures in the house. “They’re defining spaces, they’re creating volumes,” he says. “They’re pulling you in, or they’re cantilevering you out.” 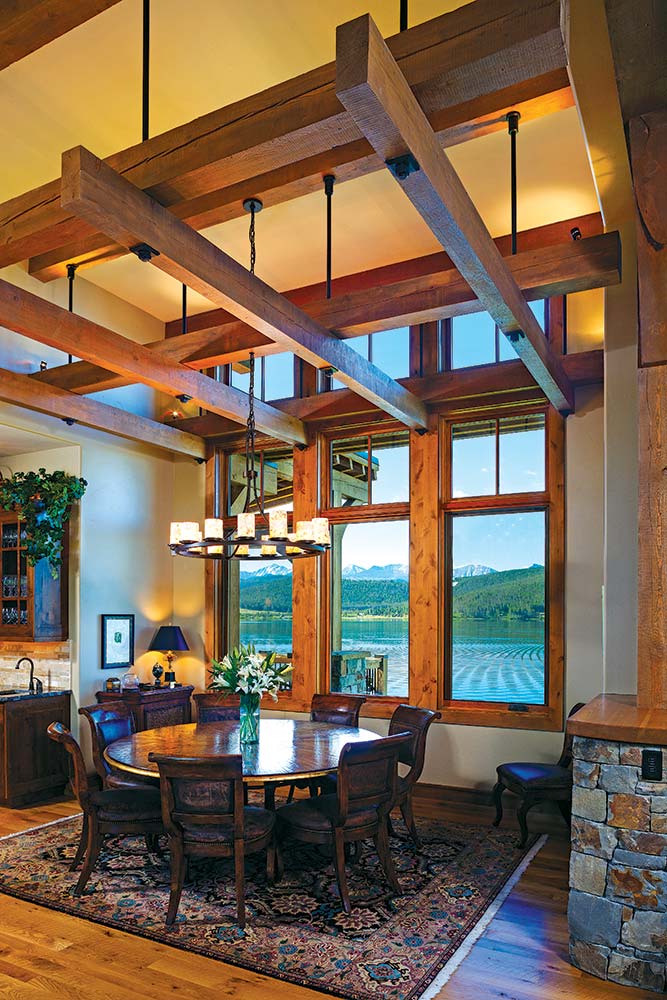 To keep the home protected from the harsh Montana winters, the house is insulated with a combination of spray polyurethane foam and fiberglass, and to keep it comfortable Lee installed a ground-source heat pump.

The system required 10 wells, 250 feet deep, for the heat-exchange tubing. The system provides both heating and cooling as well as domestic hot water by means of a desuperheater, Smith says. Heat is distributed by radiant tubing in the floors, while ducts carry cool air for air conditioning. They can also provide a quick blast of heat with the help of a propane boiler when the weather turns cold.

The southern exposure provides good solar heat gain in the winter, and window overhangs minimize the sun’s impact during the summer. For Lee, the project presented a logistical challenge because it was more than two hours away from his shop outside Bozeman. That meant finding housing for his employees nearby during construction. But the lakeside location and Smith’s design more than made up for it.

“There were some fun details in this home that my guys got to lick their chops on,” he says. “It was great.” The effort paid off for the owners as well. “We really enjoy it,” Wayne says. “There are very few things we would do differently because we took the time to do it right and asked the questions about how we would live in the house. It provides everything we’d ever hoped for.” 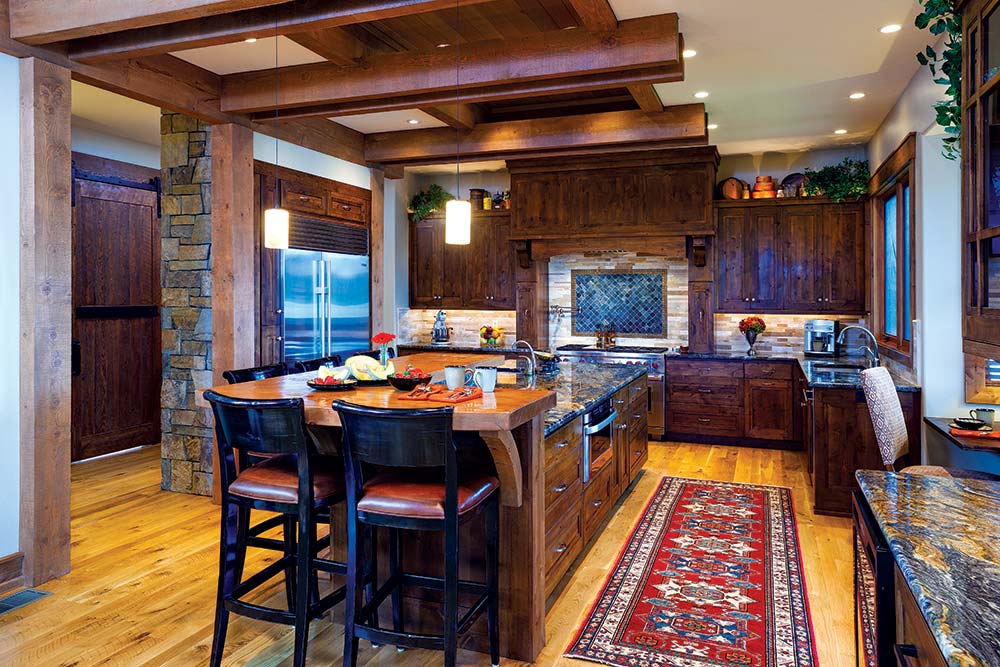 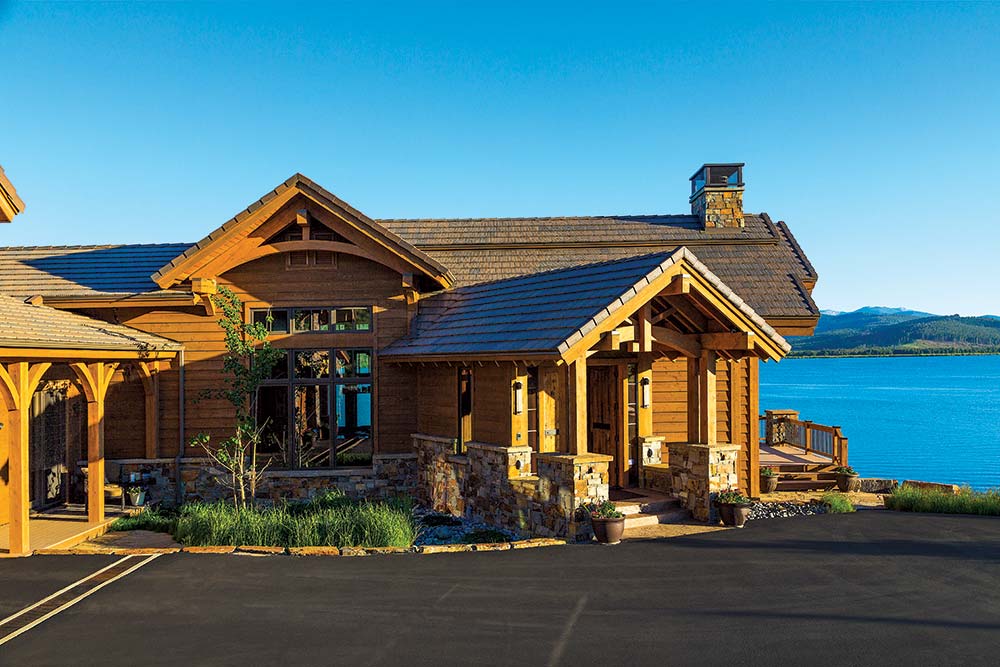 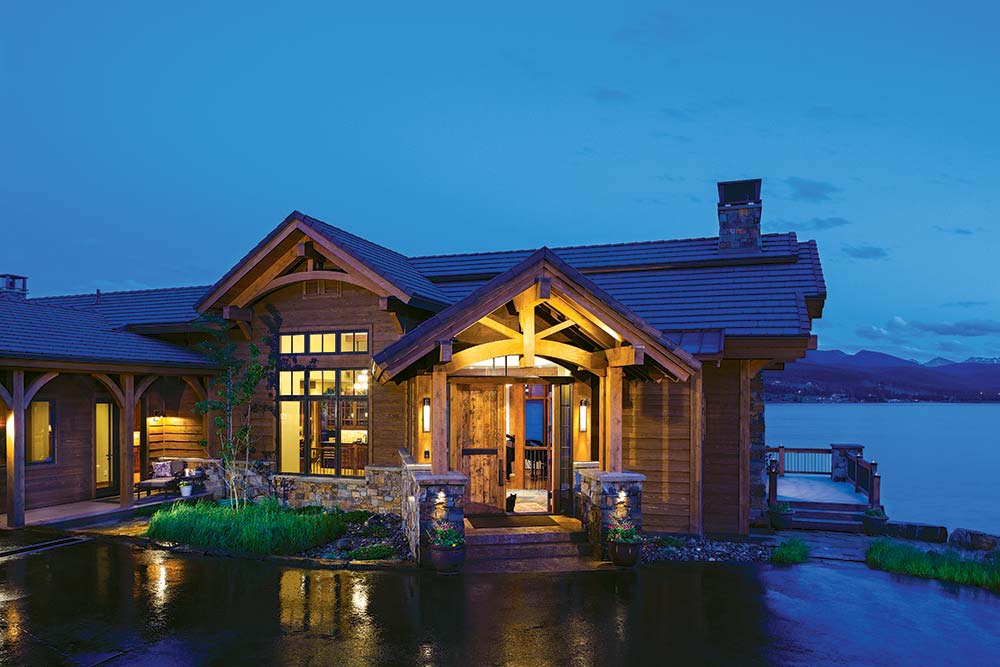 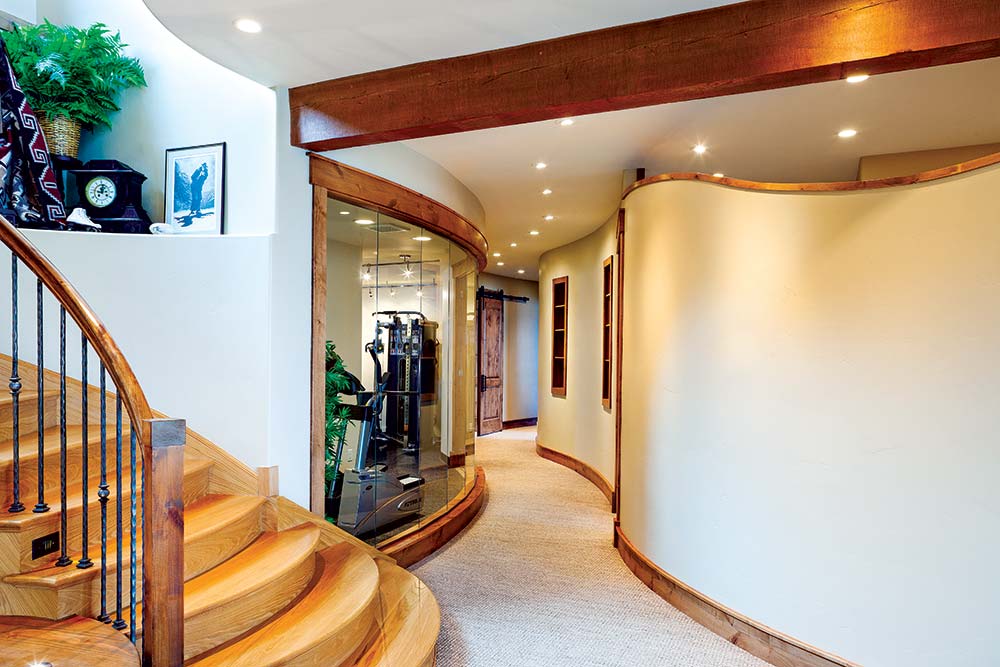 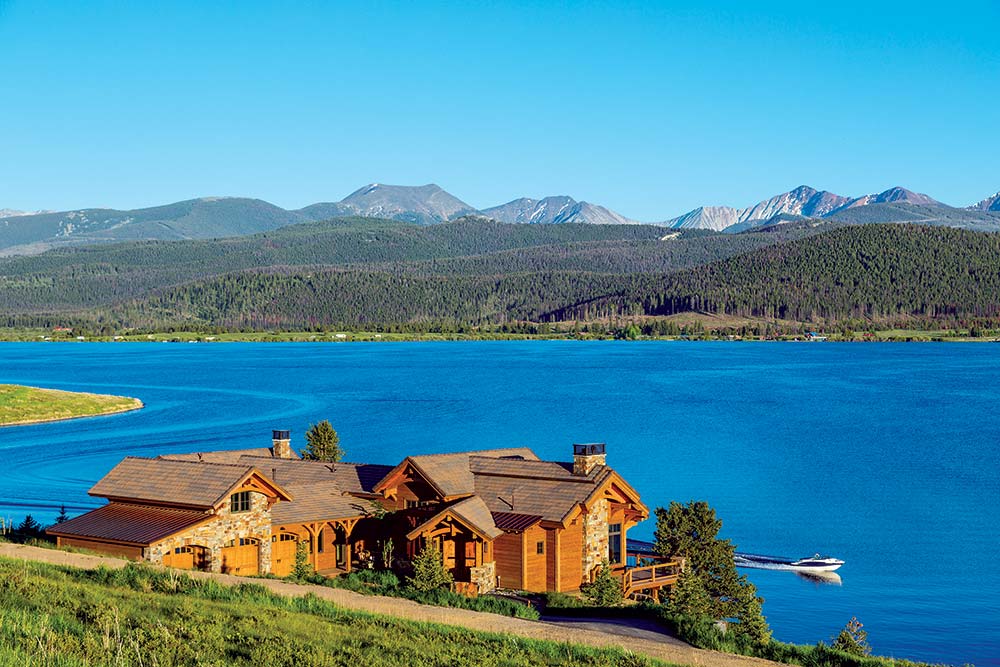