A Traveling Couple Finds a Timber Home to Stay

With family in mind, a couple builds their “forever” timber home in New York. 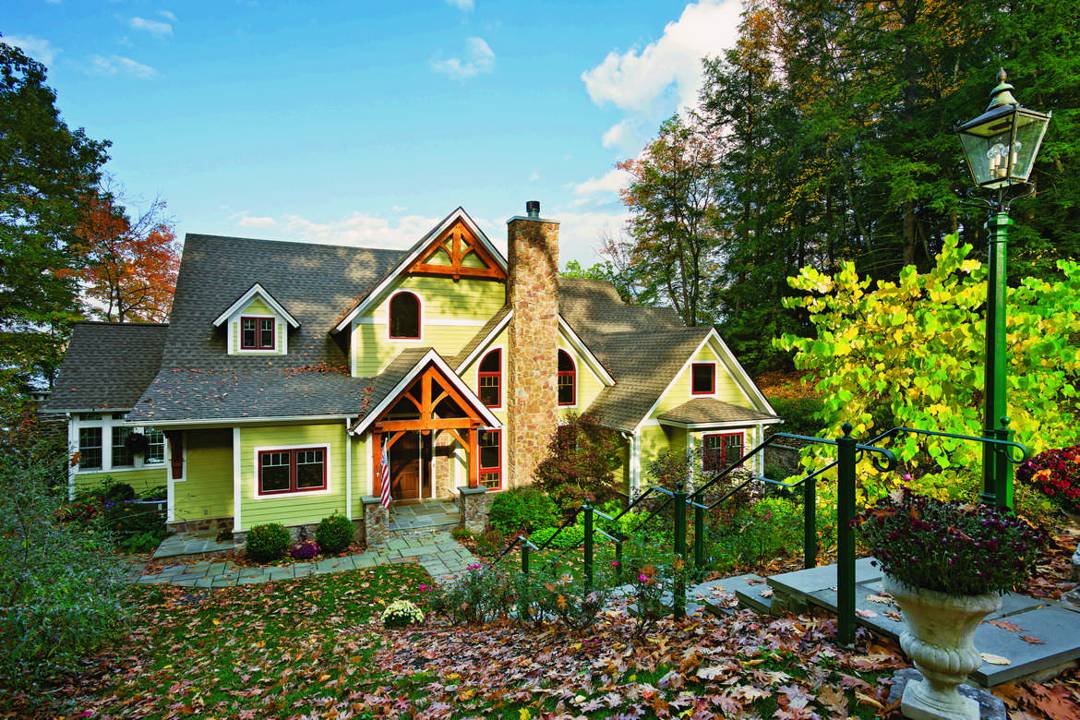 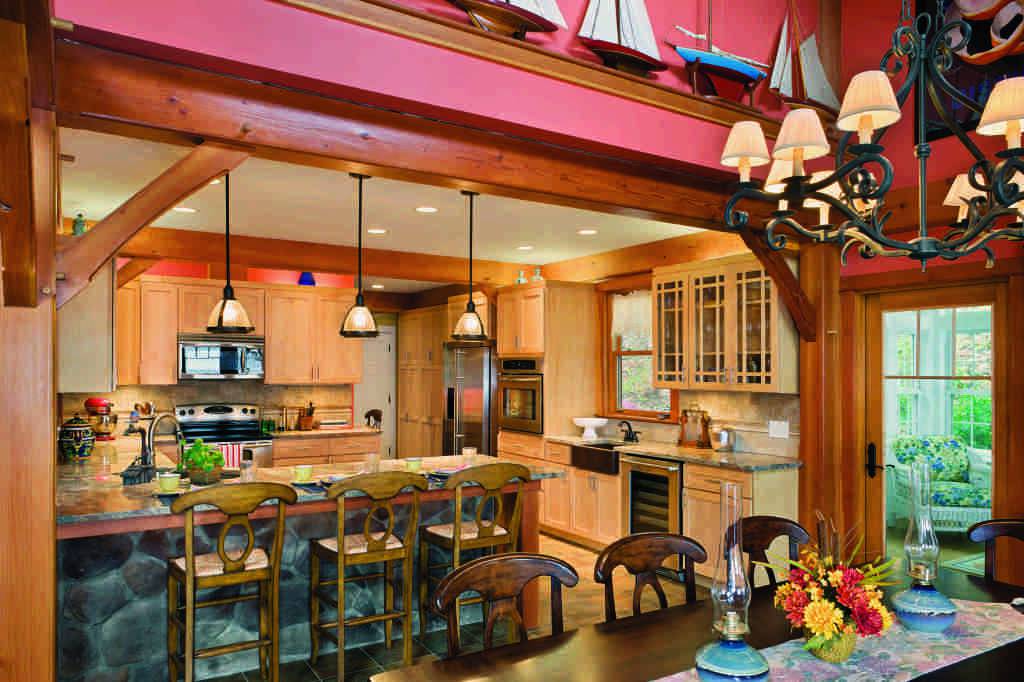 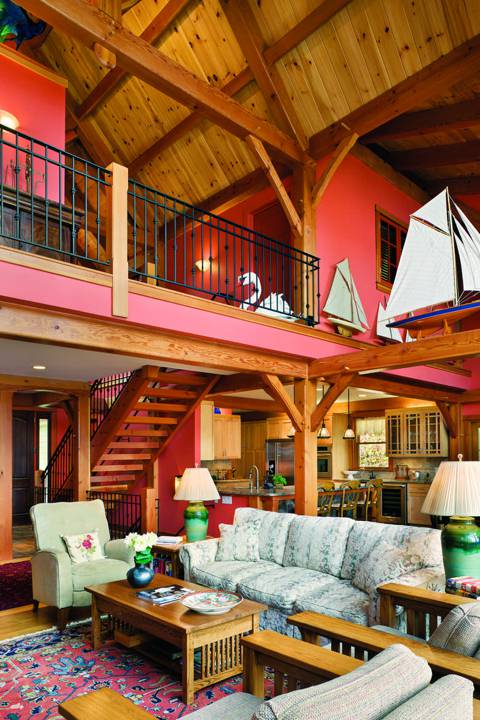 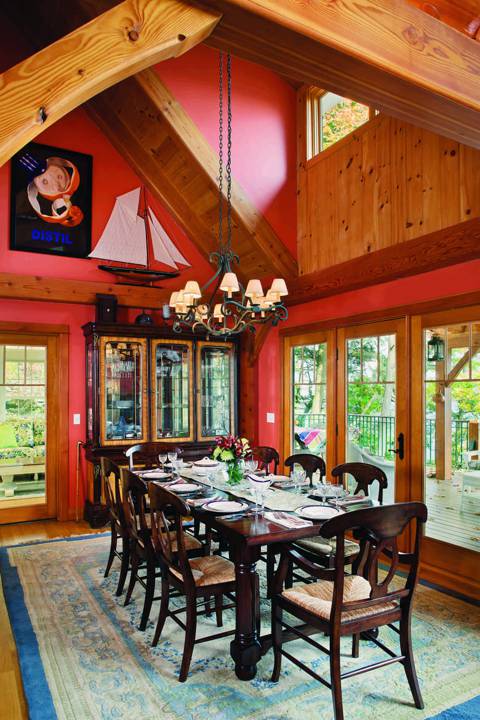 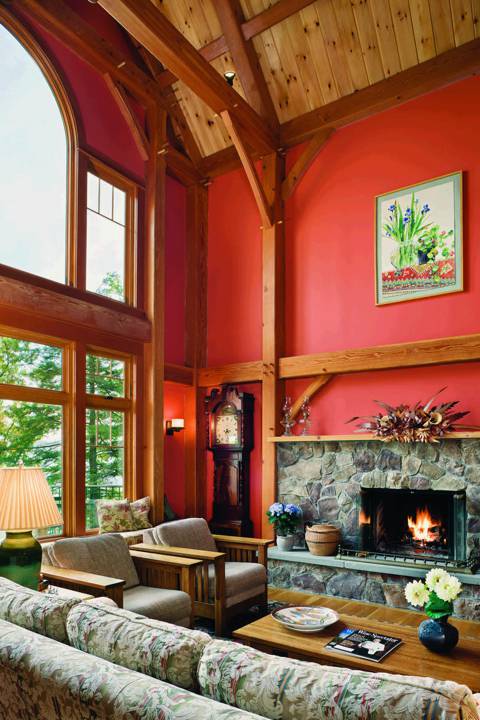 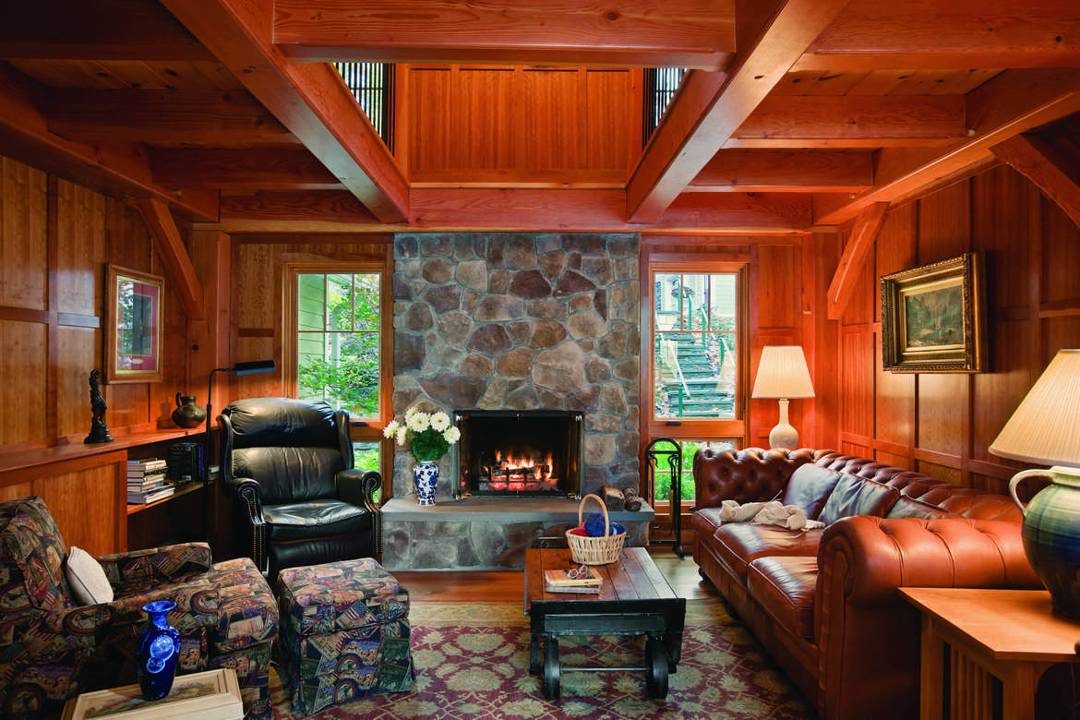 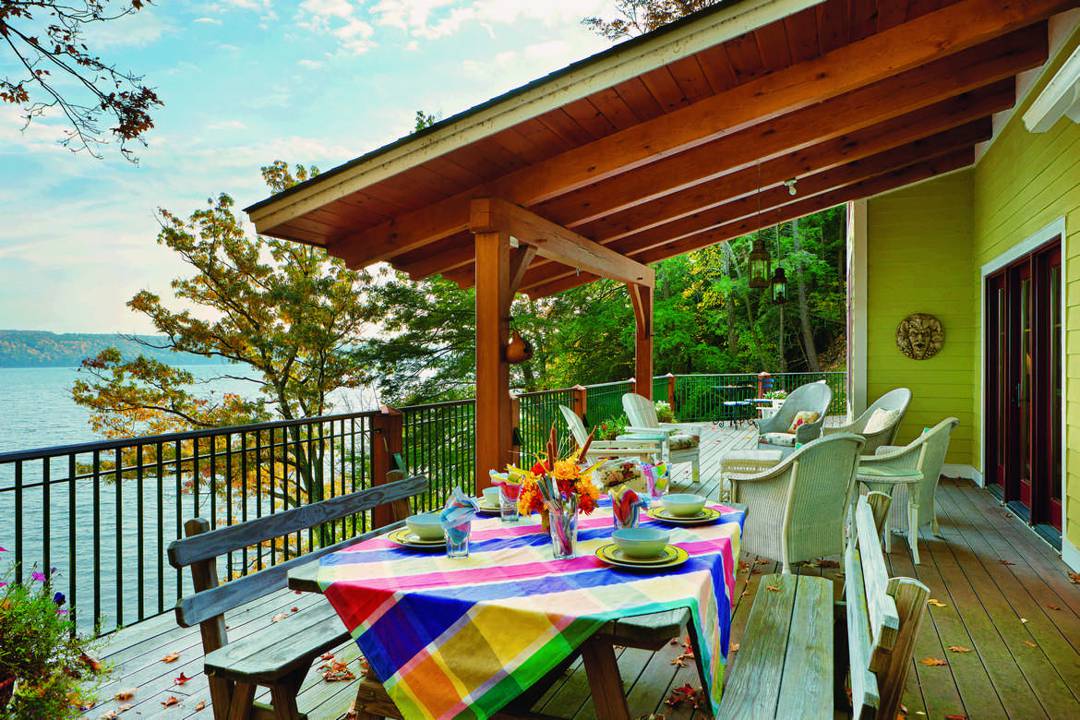 By Suzanna Logan
Photos by Roger Wade
Styling by Debra Grahl
After years spent living abroad and traveling the world, Tom and Jean Seaman have found their haven of rest in the states. At their home overlooking Cayuga Lake in upstate New York, the couple enjoys a little slice of paradise everyday.
On sunny spring and summer days (the couple spends the cooler months down south), the Seamans and their four grown children and seven grandchildren head to the lake to while away the hours on the water.


“We’re a family of sailors,” says Tom — and it shows. Inside the couple’s 5,400-square-foot home, designed and built by Woodhouse , model ships float across the tops of Douglas Fir timbers in the main living area, a large, easy-flowing space that includes the kitchen, dining room and great room. Wooden posts and beams break up the expanse, turning what could be a cavernous room into cozy sections. 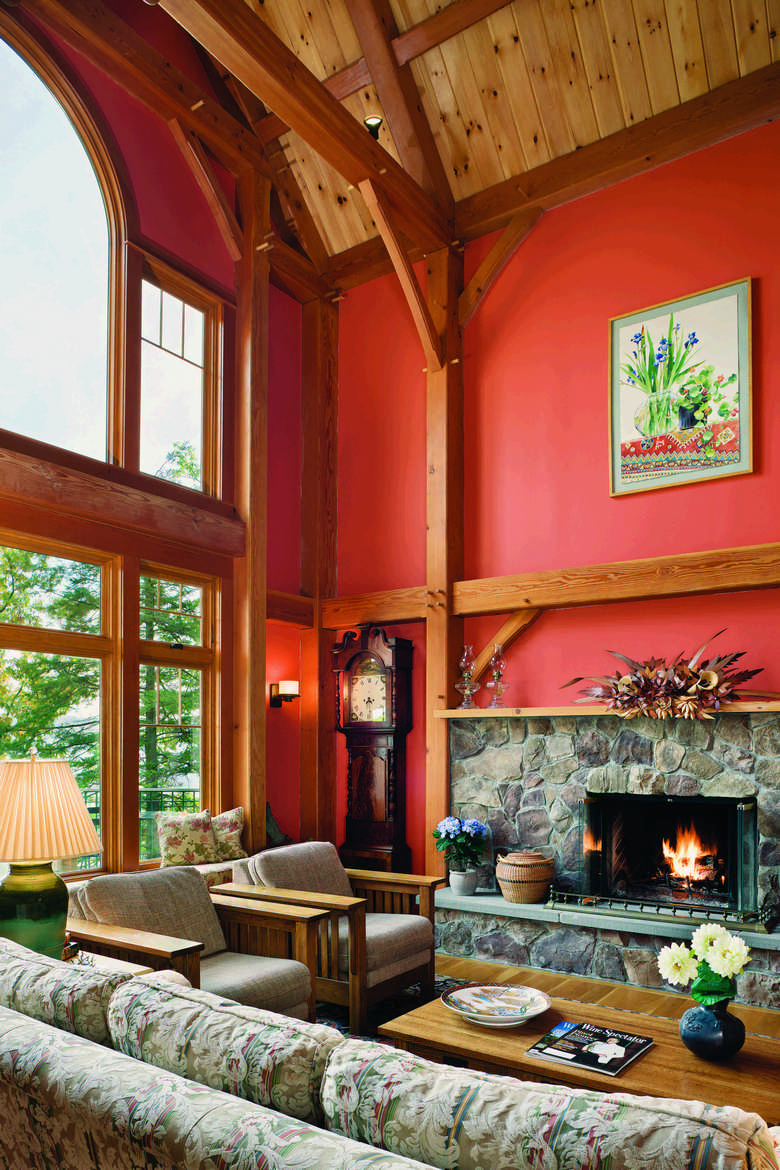 A private master suite and library (whose ceiling opens to a mezzanine-style nook for books) continues the first floor’s intimate feel and, more importantly, guarantees the aging-in-place design the Seamans were after.


“We wanted access to everything we needed on a single floor,” says Tom. The form-follows-function concept drove the layout of the other two floors, as well. “We wanted a place that was family-oriented and could handle visitors and still feel comfortable,” says Tom.
Upstairs, a pair of bedrooms invites overnight guests. In the basement, another suite expands the sleeping quarters, but it’s the adjacent recreation room that snags the most square footage and use.
“It’s a popular spot with the grandkids,” Tom says. Walk-out access to a stone patio provides even more room to play. To further increase the home’s outdoor living space and spotlight the spectacular scenery of the lake, the Seamans included a deck off of the main living area — perfect for taking in the sights and sounds (or lack thereof). 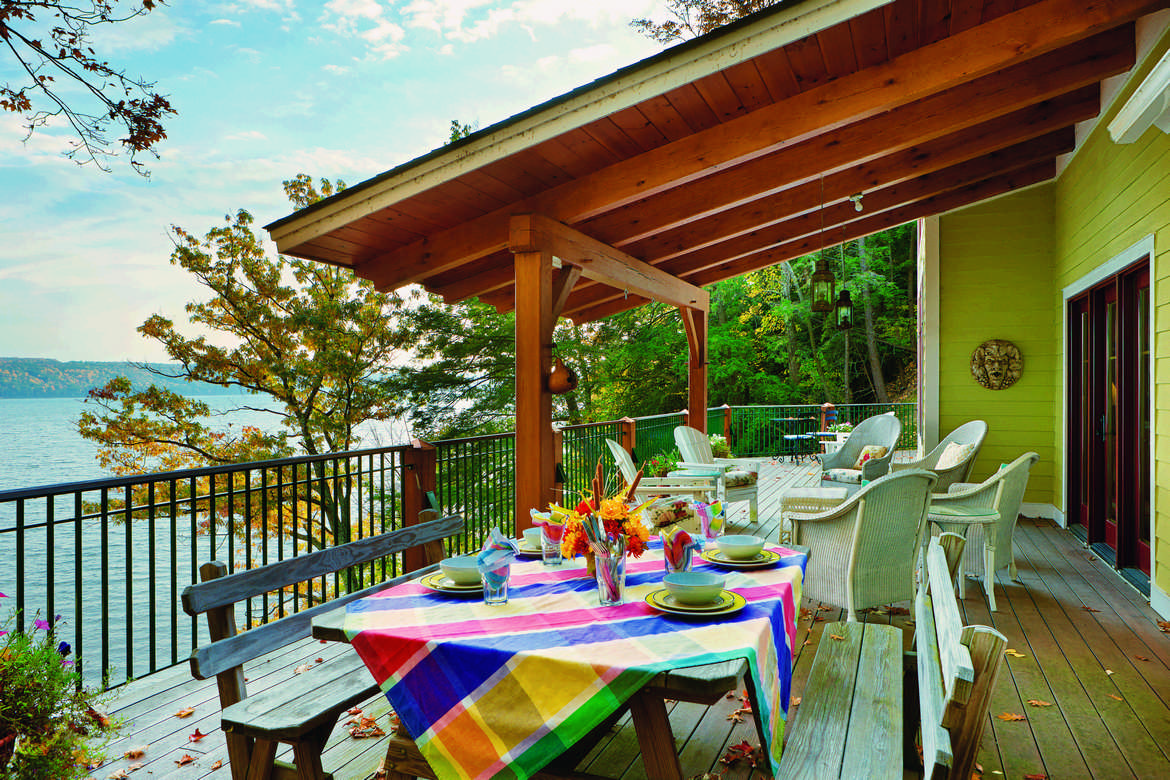 “It’s very quiet here,” Tom says. “We have hills on both sides of us, so all we hear is the lapping of the water.” Even when indoors, an abundance of glass across the back of the home keeps views front and center for the Seamans and their guests.


Still, it turns out that some of the most memorable sights may be inside the home. An inveterate collector, Tom has filled the interiors with finds from his globe-trotting past. A Canadian wheat scale doubles as a coffee table in the library. A grandfather clock, settled into a perfect niche of timbers in the great room, is one of 28 he brought back from Europe.
Even the gas lamp lighting the antique cars in the motor court has a story.

“A small town in England was removing them and putting them in the junkyard, so I bought the whole town out,” he recalls. Deciding what treasures he could fit into the home may have been harder than the construction process itself for Tom, who acted as his own general contractor and had plenty of building experience before beginning the project.

“Years earlier, I had built a 12-unit development with Woodhouse and knew I liked working with them,” says Tom of the locally-based timber company now owned by his son, Pat. “Our biggest challenge was the site since the property is like a gravy boat, sunken in the middle,” he explains. “But we made it work.”


Having had a few years to enjoy the fruits of their labor (construction was completed in 2008) and discover any shortcomings, Tom is more sure than ever that the home they built suits them just fine. “We’re staying put,” he says, then adds with a chuckle, “it’s from here to the ground.”
Company Information:  Woodhouse, the Timber Frame Company, 800-227-4311
★