Timber Framing's Legacy: The History of This Iconic Style

With its roots firmly planted in Old World Europe, the tradition of timber framing branched out to North America and grew strong. 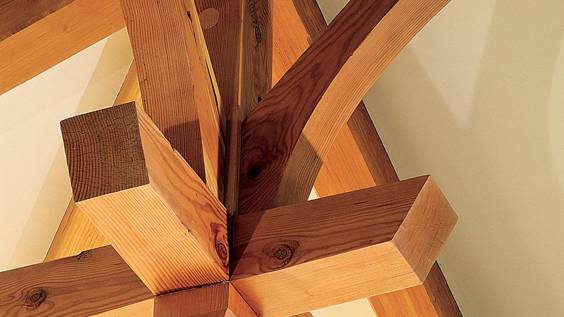 Photo: Heidi Long
Modern timber frames embody the ideals of artistry and attention to detail, paired with sophisticated engineering and materials that are hand-selected to suit the structure and reflect the setting.

But the men and women of today’s timber framing industry follow a rich tradition of knowledge earned through years of training, apprenticeship and hands-on experience, in what is largely an oral tradition. Great resources and textbooks exist, but nothing replaces learning alongside an experienced craftsman.

The timber framing tradition has roots reaching as far as Europe and Asia utilizing techniques dating back to Neolithic times and has been most popular in regions where deciduous hardwoods, like oak, thrive.

Timber framing naturally emigrated from the Old World to the New, continuing the traditions and styles of European architecture. However, after 1750, structures built in the United States tended to be more “American” in response to the local climate and agricultural practices.

Traditional timber frames were “scribed,” from the 12th century to the 19th. In a frame built by scribe rule, mortises are cut, their corresponding timbers tailored to fit precisely, and each piece is marked to indicate mated timbers and/or position within the frame. Timbers in scribe rule are not interchangeable.

But in rapidly-growing 19th century New England, carpenters found efficiency in developing “square rule” carpentry. Square ruling imposes regular planes within imperfect or irregular timbers, and the carpenter makes reductions on the non-reference faces accordingly. Will Beemer, founder and director of the Heartwood School in Massachusetts, offers this thought about square rule:

“Pieces may be pre-fabricated without selecting the mate piece it’s to join, and members such as joists, braces and rafters become interchangeable. No pre-assembly is required before raising, and even peg holes can be laid out and drawbored ahead of time.”

In the mid-1800s, the demand for fast, cheap housing pushed the construction industry in yet another new direction, bringing dimensional lumber to the forefront — where it persists today. However, timber framing in the United States and Canada experienced a revival in the 1970s, with craftsmen like Will Beemer and Jack Sobon leading the North American renaissance, training themselves and subsequently new generations of craftspeople.

In 1987, the Timber Framers Guild was founded, with the express purpose of retaining and celebrating the traditional craft of timber framing. Guild members are devoted to the craft and share it with the rest of the world through community building projects that not only serve as hands-on education for members, but also as a lasting public legacy for communities to enjoy.

In the end, homeowners are the ones who truly benefit from this meticulous preservation of tradition, because they not only get to live in a house they love, they get to live in a true piece of art and history.

To learn more about timber framing’s rich history — and its modern application —  check out the Timber Framers Guild at tfguild.org.
★