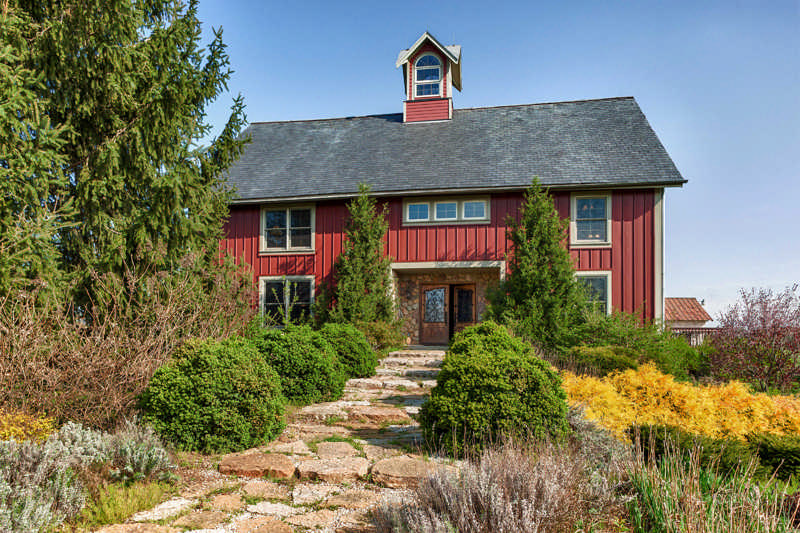 Living a rural life has always been a dream of Susan and Jack Heimerdinger. No stranger to the country, Susan was raised on an Ohio farm, while Jack grew up in suburban Cincinnati, always harboring the fantasy of an unhurried rural life. Not long after they married 16 years ago, the couple set out to find an older structure or build a rustic-looking new house. “Ideally, a barn would’ve been perfect,” says Jack. “Truth is, Jack needed a project.

He’s a cabinetmaker at heart with fine woodworking skills,” says Susan, recalling it was probably serendipity that they discovered 48 acres of land that was about to be divided and sold in rural Lebanon, Ohio. “One of the 5-acre parcels was appointed with an old farmhouse surrounded by pastures and various outbuildings — notably one slate-roofed, late 19th-century dairy barn. It wasn’t a slam dunk convincing the owners to sell it to us, but after some wrangling we became homeowners of what would materialize into a 6-year barn conversion,” says Jack.

While the barn was under renovation, the couple moved into the farmhouse on the property so they could better oversee the process of turning their acquisition into a livable home. “It took a lot of creativity to make a structure that had always been meant strictly for agricultural use into a comfortable house,” says Jack, who served as general contractor on the project.

“Call it blind determination, but we were bound to construct a home with all the modern conveniences yet maintain the integrity of the original barn.” Franklin, Ohio, contractors Bruce and Andy Stewart of Architectural Reclamation Inc. were hired to inspect the soundness of the structure known as a ‘bank barn’— identified by the fore and aft doors permitting wagons inside to pitch the hay into the lofts before driving out the back. Milking was done in the basement.

The Stewarts recommended shoring up the barn with interior cross timbers, metal support beams and metal strapping. In addition, they suggested adding support posts extending from the ceiling rafters into the basement. To accomplish this, the team pooled their talents and muscle, found a barn slated for demolition not far from Lebanon and salvaged six, hand-hewn beams each averaging 20-feet long.

Those beams would eventually become part of the interior structural reinforcement that the Stewart team proposed. Because the Heimerdingers wanted to maintain the rustic nature of the interior barn-sided walls, insulation was relegated to the existing exterior walls concealing the insulated panels.

Contrasting with the interior barn wood, they also used a rough textured stucco drywall on the ceilings and some of the walls to avoid making the interior look too dark, Susan explains. And, to maintain the timeworn look of the wood floors, the original mouse holes, cracks and blemishes on the main floor’s distressed pine planks remain untouched. “It’s all part of the character,” Jack acknowledges.

While they were reconstructing the barn, the Heimerdingers were always cognizant of their goal to convert the barn into a modern living space. With so many interior design possibilities, the couple laid out their preferences for frame-out of the building and contracted with the Stewarts for their skillful architectural expertise on the layout of the home. Two main floor bays, collectively measuring 36 feet deep by 48 feet wide, encompass the living room and dining room, kitchen and game room, all surrounding a massive three-story entryway.

On one side of the bay, Susan and local craftsman David T. Smith designed the kitchen, complemented by an adjacent dining room. On the other side of the bay, Jack’s game room shares space with the living room. To reach the second floor, complete with master suite, guest room and bathroom, a grand master staircase was crafted. “I teamed with the Stewarts and built the treads with truck-bed oak, and the railings and balusters out of sassafras wood chosen for the tight grain and durability,” says Jack with pride.

The Heimerdingers don’t hesitate when asked to recount the blood, sweat and tears that have gone into this project. “It’s still not finished, but we’re still married,” Susan says with a laugh. “It takes partnership and a lot of patience to undertake a project of this scope.” Meanwhile, the pasture behind the house is greening up with the recent Midwest rain. Soon, the pack of 13 alpacas the couple raises will be able to graze to their hearts’ content. Roxy and Corona, the couple’s two rescue dogs, along with resident cats Libby, Milo and Finnegan, are thoroughly enjoying the run of the house and grounds. For now, the conversion of a barn into a home has been a labor of love. “It’s been a perfect fit for us,” says Jack. “We’re enjoying the dream.”
★