A smart design creates privacy in a compact hybrid timber frame home on a tight lot.

Oak newels and railings are complemented with wrought iron balusters. Flooring in the main-level entry is slate.

Builder/designer Dean Hodgson chose knotty spalted alder for the kitchen cabinets for both its rarity and its appearance.

On the main level, a covered deck outside of the great room has its own gas fireplace. It makes a comfortable and private retreat even when the weather is a little chilly. The floor is colored concrete.

The master bedroom on the main floor includes a wall of windows that look toward Mt. Baker to the east.

Dean Hodgson had been living “on acreage” for years, enjoying the privacy of life in the country, but a new building lot in British Columbia’s Eagle Mountain development was just too good to pass up. Although the lot was beautiful, it was not large, so a cleverly designed compact hybrid timber frame home was just the solution.

Hodgson, then a dealer for Riverbend Timber Framing, thought building a house there would be a good stepping stone, not only giving him a comfortable place to live for a few years but also adding to his building portfolio and his web site.

One big incentive, he says, was a stunning view of Mt. Baker and the largely undeveloped valley below.

The trick would be designing a house that offered privacy from neighbors as close as 15 feet on either side of him. He sketched the house and brought in a designer to produce construction drawings. Together, they tweaked the design until they had a 5,500-square-foot hybrid timber frame home on three levels that made the most of its surroundings. 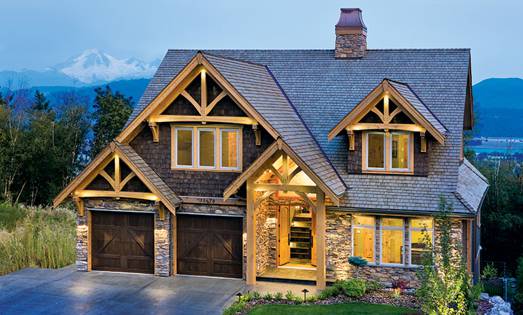 A Floor Plan that Emphasizes the View

Hodgson placed the great room on the main floor, between the kitchen on one side and the master suite on the other.

Outside the great room, Hodgson added a covered deck with a gas fireplace, giving those two spaces unencumbered views of a distant Mt. Baker to the south and the valley below. Yet they were both protected from nearby lots.

“The great room looked through the deck and out toward the view,” he says, “so I could sit on the deck and not see my neighbors. I had privacy even though it was in town.”

He took full advantage of the sloping lot by building a walkout lower level. By adding retaining walls at the sides of the lower level, Hodgson made the change in elevation relatively abrupt, clearing the way for a generous number of windows on three walls. That, plus 10-foot high ceilings, made the basement level feel open, airy and light-filled.

To coax as much square footage out of the plan as possible, Hodgson placed a 400 square foot home theater beneath the garage floor and put a bonus room overhead, giving him 1,200 square feet of usable space on just a 20-by-20-foot garage footprint.

In the end, the house looks much more compact than a six-bedroom, six-bath plan would suggest.

The hybrid timber frame design is a mix of timber-frame elements and conventional stick-framing. The timbers, a mix of white and red oak, use traditional mortise-and-tenon joinery.

He included spalted knotty alder cabinets, stamped concrete for the driveway and covered deck, extensive accent lighting throughout the house, and exterior finishing that incorporates copper flashing, cultured stone veneer and cedar shingles. All the drywall in the house is skim-coated with compound for an extra smooth finish, and interior noise is muffled by mineral wool insulation in interior walls and cast-iron plumbing drains.

Most rooms are pre-wired for sound, and a total of four rooms in the house are rough-wired for home theaters.

The wood floor on the main level is reclaimed white oak, intentionally left on the rustic side. Hodgson went to the mill as the flooring was cut, instructing the sawyer to leave some of the imperfections. “I don’t mind the cracks, I don’t mind the knots, and if in some places you can see the saw marks on the face of the wood, I’m OK with that, too,” Hodgson says.

The house has both a radiant-floor heat distribution system powered by a natural gas boiler, and an air-source heat pump that provides air conditioning as well as the potential for heating in fall and spring. Domestic hot water is supplied by a Navien on-demand system.

The house was bigger than Hodgson needed, and in time, he sold it. He is back in the country these days on an 80-acre parcel he intends to develop into a residential community.

He may be most at home in a rural setting, but his few years at Eagle Mountain were well spent.

“I thought it would be a great pit stop in town for a couple of years, and then back to some acreage. If you’ve got to be stuck somewhere, that was a pretty good place,” he reminisces.