Other timber frame houses do not compare to this award-winning Michigan family home they can comfortably sink right into. 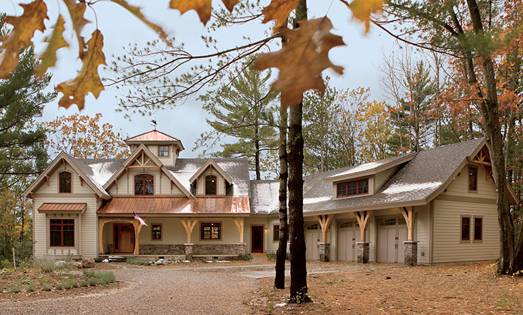 When Detroit architect Bob Formisano came up with the idea for his family’s second home, he knew just who to turn to. He’d been working closely with Stewart Elliott, sales manager for Riverbend Timber Framing, for two years on a software program that helps determine the costs of building a custom timber frame house and knew that Stewart, author of The Timber Frame Raising, along with the folks at Riverbend Timber Framing had what it would take to build what he had in mind: a timber frame house with structural insulated panels (SIPS).

“I wanted the home to highlight the best of what a timber frame can be,” says Bob. He also wanted the house to be as green and energy efficient as possible. It was a tall order to be sure, but the two hammered out a design over cups of coffee and bottles of beer. After Bob created the initial design, Stewart came up with a timber frame house plan, using traditional timbers in the main living areas and partial timbers with no posts in the kitchen and library. The breezeway and garage are constructed of SIPS, upping the house’s energy rating.

Positioning the main living areas to face southwest to take advantage of the summer breeze was another opportunity to maximize energy efficiency. And to keep things eco-friendly, he cut down as few trees on the 10–acre lot as possible and used forest-salvaged inland fir (FSIF) for the main timbers, along with cherry wood for the braces and pegs, and walnut-stained oak. Other green materials include low VOC (volatile organic compounds) paint, recycled wood-paneling for the library and a cast-stone gas fireplace. Bob’s careful planning paid off. His 6,200-square-foot five-bedroom, four-and-a-half-bath timber frame house on Pearl Lake, 15 miles west of Traverse City, Michigan, has garnered six awards for its energy efficiency. Indeed, the timber frame house is the largest ever to have won the Michigan state energy star award. “It’s 62 percent more efficient then the average home,” Bob says.

More important than the accolades, Bob and his wife, Joni, wanted a warm and inviting retreat for family and friends—“like an old comfortable sweater when you walk in,” says Joni. By all accounts, they’ve succeeded. “There are some very subtle things going on that make that timber frame house incredible comfortable,” says Stewart, including warm finishes and paint colors, and window seats. (“To be really comfortable, you have to have little places to go,” says Joni.) And it’s these subtleties that have created a warmth uncommon in larger homes. “We get the comment a lot that the house is big but it doesn’t feel big,” says Bob. “That’s just what we want to hear.”

Bob and Joni Formisano’s home features 9-by-9-inch square posts (instead of the traditional 7-by-9) both in the great room and on the front porch to make the frame look beefier. Gun-stack braces connect the horizontal and vertical timbers for a more rigid, and decorative structure.

The kitchen is its own space. It’s differentiated from the great room in two ways: no posts, just beams in the ceiling and cork flooring undefoot.

Joni chose Minka Lavery light fixtures to use throughout the house, this one illuminating the dining space outfitted with Craftsmen-style dining room chairs built by Amish artisans.

A red accent wall warms up the den along with the hearth it frames.

Recessed lighting above the window seat is a subtle touch that makes all the difference, turning this nook into a welcoming escape within a grand floorplan.

To avoid an imposing wall separating the loft and master bedroom, designers left an opening above the door to keep the upper level sightline of the timbers unobstructed.

Granite counters and Craftsman-style cabinets are a sleek touch in the bath, and the built-in shelving is a great spot to display decorative items out of the way of this functional space.

Bob and Joni Formisano’s home features 9-by-9-inch square posts (instead of the traditional 7-by-9) both in the great room and on the front porch to make the frame look beefier. Gun-stack braces connect the horizontal and vertical timbers for a more rigid, and decorative structure.