A timber home addition brings out the best in an 18th-century Virginia farmhouse. 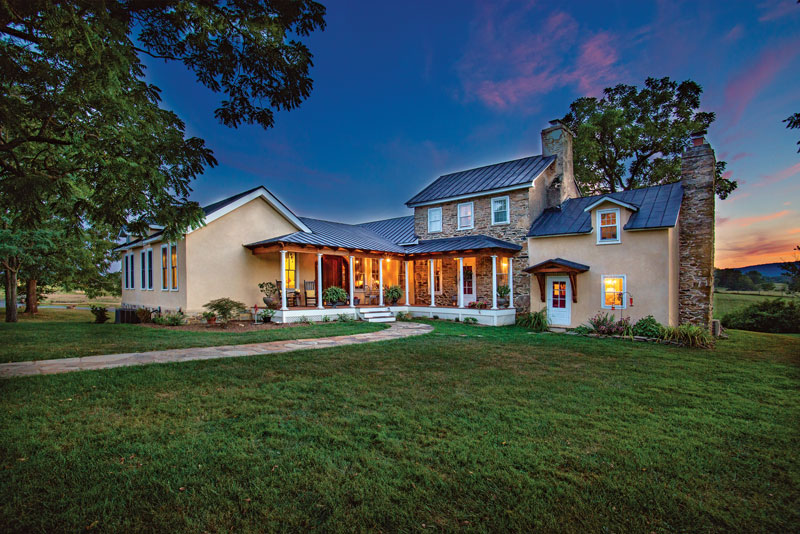 Life is full of surprises. Just ask Leslie and Michael Schreiber. After living in the northern Virginia suburbs of Washington, D.C., for decades, they decided it was time to downsize in 2012. But after looking at local condos, things took a turn — a turn towards the country. 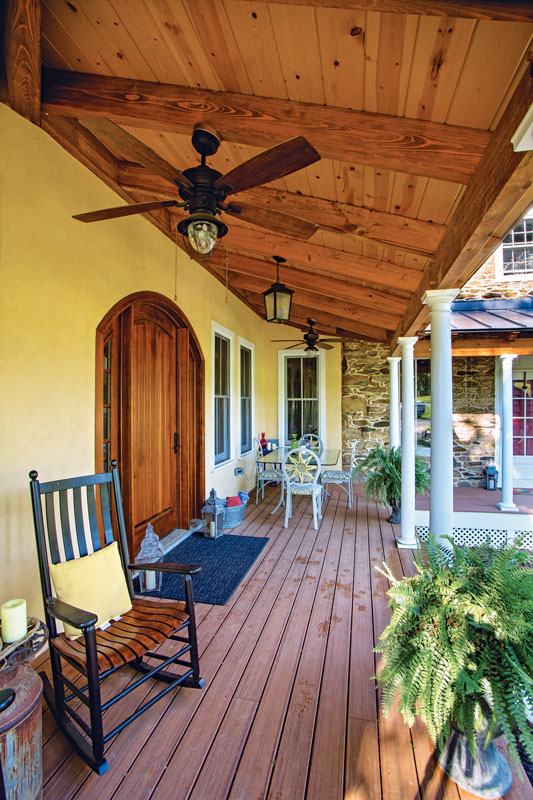 “This move really took on a life of its own when we started looking at old farms,” explains Michael, adding that he and Leslie actually put offers on three existing homes before coming across a piece of land for sale in the rolling hills of Bluemont, Virginia.

“We didn’t even know the house was there until we came to see the land,” he says. It was that house that would become the Schreibers’ home, a charming stone farmhouse that had been part of the local landscape for more than 200 years. “We immediately fell in love with the house,” says Leslie, “but we knew, because of its state, that we’d have to start from scratch or build an addition to make it work for our lives.”


Luckily, the love was too strong and the latter won out in the end. Keeping the historical integrity and style of the home in harmony with the Virginia countryside was important to the Schreibers, so they immediately started thinking about building styles. They ultimately decided a timber frame could provide the open feel and traditional look they were hoping for and, after meeting Kevin Perdue, representative for West Virginia-based Heavy Timber Truss & Frame at a local Log & Timber Home Show, they were sold on the idea. Soon after, plans for the addition were underway. 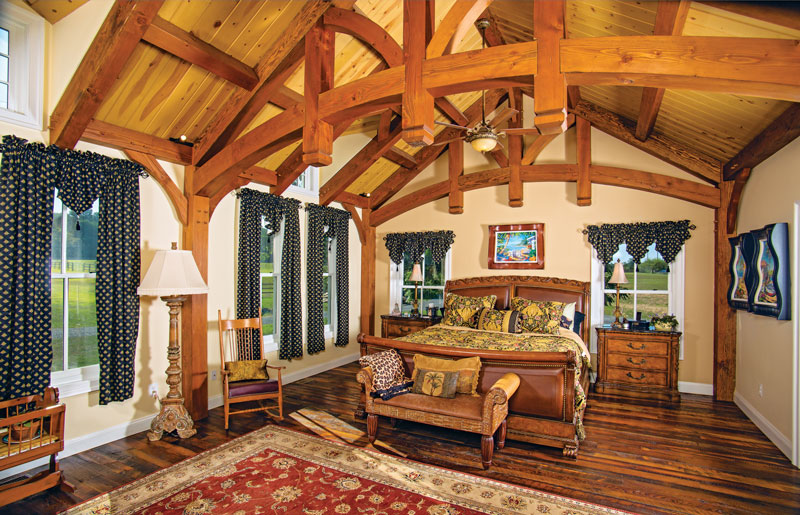 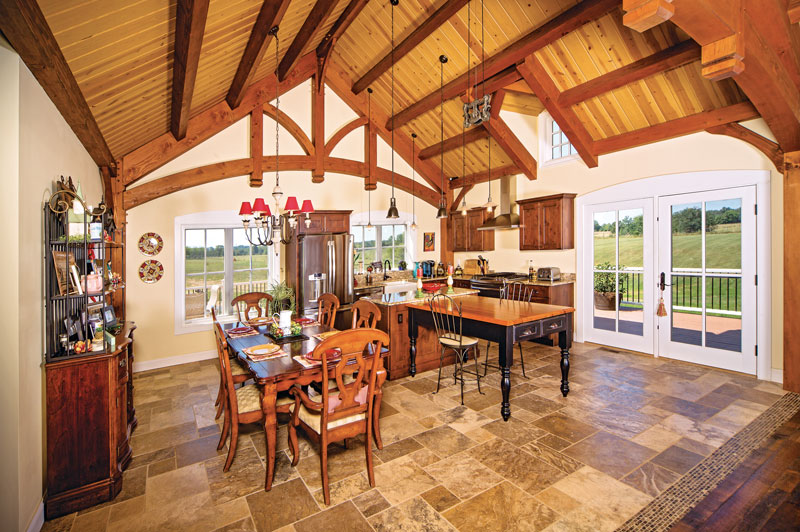 “The process moved quickly because Leslie and Michael were so decisive,” says Perdue, allowing the Schreibers and their design team to work together through online meetings and virtual tours of the plans. “If they weren’t home, they’d let us stay at the house to take notes and measurements. This trust allowed us to get through the planning phase quickly and allowed for a level of detail since we were so familiar with the house and the property before the build began.” 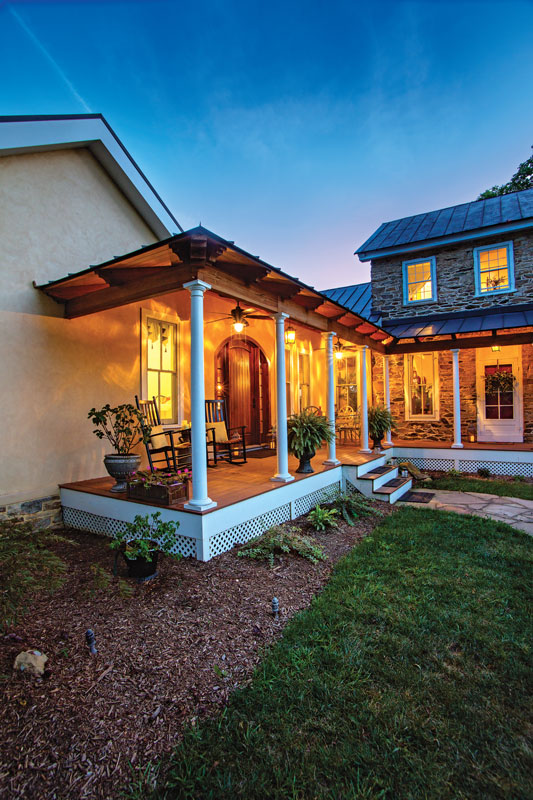 Although the project did slow for a few weeks when the construction crew hit rock during the initial excavation, the rest of the build went off without a hitch — and the resulting hybrid of old meets new is nothing short of spectacular.

“The timber goes with the stone from the original house perfectly,” says Leslie, pointing to an intentional design decision that was made to pay respect to the historical significance of the house. “We love how it’s so unassuming from the outside, and then people are so surprised when they step through the front door.” Inside, 8-inch-thick fresh-sawn, Douglas fir timbers with a Danish oil finish comprise the addition, creating soaring ceilings and a wide-open floor plan that’s perfect for entertaining guests while still feeling cozy when it’s just the two of them.

“We love the look of the vaulted ceilings so much that we changed the original design that included a flat ceiling near the entry of the house. Now, the entire frame shares one center roofline, resulting in more space for areas like the powder room and the pantry because there are no load-bearing walls in the middle of the structure.” The finished addition includes an open living/kitchen space, main-floor master bedroom suite and a spacious lower level, complete with a TV room, bedroom and game room. Because of the slope of the property, the lower level gets plenty of natural light and walks right out to the rollings hills and farmland, making it a true second living space for the Schreibers’ and their family.

“The house has this great flow to it,” says Bruce Bode, partner and sales manager at Heavy Timber Truss & Frame. “They took a beautiful property and just made it better.” The Schreibers are just as pleased with their old-meets-new abode. “The finished house has really turned out to be everything we dreamed of and more,” says Michael. “We love the openness, the first-floor master bedroom, the mix of old and new — all of it. It’s better than we ever thought it could be. We’d never go back.”

Building on the Past

When the Schreibers’ purchased their little stone farmhouse, they purchased a structure that had been built in the late 1700s — a fact that gave the property instant charm, but did require an added attention to detail during the design and building phases. “It was important to the homeowners, and to us, that we be considerate of the original house,” explains Kevin Perdue, representative at Heavy Timber Truss & Frame. “For example, we found windows for the addition that perfectly matched the windows in the farmhouse. Those kind of details are what makes the finished house really come together and work.”