6 Tips for Working with Contractors

Developing a positive relationship with your contractor is a key to keeping headaches to a minimum. Joan Cordner’s unusual ideas for her log home’s design and decor presented interesting challenges for her Shenandoah Valley contractors. When she and her husband Bob moved from their New Jersey home of 32 years to Timberville, Virginia, six years ago, they designed the home to accommodate studio space for Joan, a potter and painter.

The main level of the Cordners’ modest home doubles as their living quarters and as the display area for Joan’s pottery gallery, Art Studio Pottery. The Cordners’ home wasn’t just a simple turnkey project for their contractors—the couple had ideas for the their home down to the smallest details, such as the precise measurements and placements of decorative trim around the windows. When the building process began, Joan moved to Virginia and temporarily lived with her daughter so that she could be on site almost every day. “It’s important to let your builder know what you want and how involved you want to be,” Joan says. “You have to feel comfortable with your contractor.”

Joan’s attention to detail is what makes the Cordner home distinct. Instead of installing a traditional fireplace, for example, Joan wanted a Southwestern kiva fireplace in her great room. Her mason had never built one, but he allowed Joan to help construct the exterior of the kiva, which is embossed with images of cedar twigs. Another personal touch: Joan didn’t like the look of black metal brackets and fixtures that are typical in log homes. Instead, she applied faux copper finishes on each of these pieces herself before the builder put them in place. “We really appreciate the home because we had such an active part in building it and designing it,” she says. The best way to achieve your dream home is to establish a positive working relationship with one’s building contractor. A contractor should want to work with you to create the home of your dreams, and that’s how Joan Cordner describes her builder, Jim Viola of Timberville. Below are some suggestions from general contractors on how to avoid the building blues.

It might seem like common sense, but many homeowners don’t take the time to carefully interview and evaluate potential general contractors. Don’t take lightly the task of selecting the person who will be working closely with you for months. Keith Liskey, owner of Custom Log Construction in Harrisonburg, Virginia, suggests that prospective homeowners “find the contractor that suits them and their tastes. Personalities need to match, and philosophies need to match.”

Before signing on with a contractor, check out other homes they have built, Liskey advises. Another Harrisonburg-area contractor, Joel “Buzz” Bauman, suggests that prospective homeowners spend a day with a contractor “to see what kind of person he is.” Visit the builder’s different job sites and take note of the condition of the work area and observe the crew: Are they busy working or just standing around? Be sure to inquire if the builder has the correct classifications for insurance and liability purposes.

Understand what you’re getting from your log kit and what the contractor will provide.

With hundreds of log home companies in the industry, purchasing a log kit can be confusing. That’s one of the first issues he addresses with his clients. “With most customers, they really don’t know what they’ve purchased and what else they have to add to that kit to finish their home,” he says. Knowing up front what additional expenses may be required will alleviate frustration as the building process moves forward. Additionally, consumers will be less likely to feel that the contractor is arbitrarily stacking on unnecessary charges as the process moves forward.

Sign the dotted line after you read the fine print.

Before signing on with a contractor, make sure you secure a detailed contract. “You cannot be too detailed,” Bauman says. “List as much as you can [up front].” He has drawn up contracts that specify how frequently the job site will be cleaned and prohibit the use of foul language on the site. The contract also should address the contractor’s payment schedule. Being detailed may save frustrations in the long run.

Define your expectations for involvement.

Most general contractors are willing to cooperate with clients who want to tackle parts of the project themselves, such as applying the chinking or painting the interior walls. Let the GC know your plans before the building process begins. “The log home customer typically has the desire to do some things on their own,” Liskey says. While some clients may not want to do any of the work on their home, most have opinions about minor details, such as where electrical outlets should be placed. Making appointments with the GC or visiting the job site on a regular basis will ensure that you have the opportunity to voice your opinions before the work is done.

Many homeowner horror stories emerge from a building project that skyrockets from the original estimate. This isn’t always the contractor’s fault, however. The contract should specify the budgeted amount for items such as showers and tubs, light fixtures, and appliances. Keep that figure in mind when the contractor sends you out to select these items. Every dollar over the allotted amount will add to your purchase price.

All of these suggestions boil down to one fact: Communication is key. Before the building project begins, talk to your GC about what you want in the house, how involved you intend to be and what decisions he or she can make for you. “Sometimes you don’t know what you want, and sometimes you know exactly what you want, but you cannot convey that to me,” Liskey says. “That’s a critical job for the general contractor, to figure out what the customer wants.” If you have unusual design requests, you should do the research and provide the information to the builder.

Joan Cordner’s request for a kiva fireplace, for example, though common in the Southwest, was a new idea for her small town contractor in Virginia. But she found photos and some general directions for building one, and her mason was happy to oblige. While it’s good to be involved with the day-to-day decisions, don’t play the role of “armchair builder.” Know when it’s appropriate to back off and let the GC you hired do his or her job. Hopefully, you selected someone who’s got your best interests in mind.

A Timber Home Timeline: From Start to Finish

How to Get an Accurate Quote for Your Home 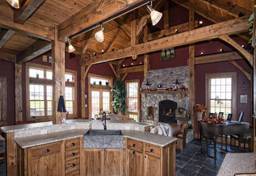