A North Carolina Timber Home is Worth The Wait

After years of planning, one North Carolina timber home goes from dream to reality. 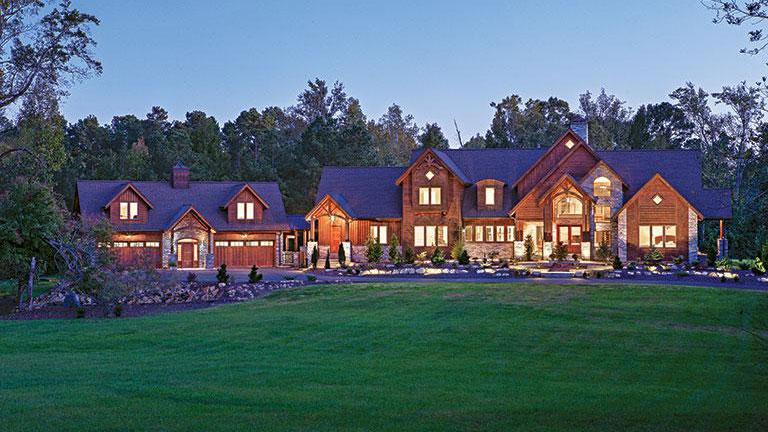 Deciding on a dream home design is almost never an easy feat. After all, it’s most likely the culmination of months — even years — of collecting ideas, researching companies and planning that “just right” space that pairs perfectly with your lifestyle now and in the future.

For Stephen and Ann Aylward, though, coming up with a design for their North Carolina “mountain modern” retreat took even more time than most. The challenge? “We had no idea how to explain what we wanted, but we knew what we didn’t want,” says Ann with a laugh. “We knew we didn’t want a traditional house like we lived in
before and we knew what we liked once we saw it.”

For the home’s exterior, what they liked turned out to be a style created by Brett Schwebke of Tynecastle Builders in Banner Elk, North Carolina. “We actually had an old issue of Timber Home Living and one of Brett’s houses was featured on the cover,” explains Stephen. “We both loved the style and knew that was what we wanted to shoot for.” Within minutes of finding the article, Ann had contacted Schwebke and set up a time to visit his office the very next week — a quick decision that ultimately drove the entire project.

With Schwebke as a “kind of consultant” to the Aylwards and their build/design team, they got to work creating a home that mixes traditional mountain-style elements with contemporary, casual design. The Douglas fir timber frame was the first step toward achieving the look, helping to create wide, airy expanses of space in the home’s main living area. Timber accents can be found in other areas of the home, including the first-floor master suite, mudroom and, of course, the lodge-like exterior.

Inside, the 7,500-square-foot, 4-bedroom, 3-bathroom home is a true reflection of what Ann and Stephen knew they didn’t want when their design
journey began. “We didn’t want hallways or a formal foyer area,” says Ann. “We wanted people to walk inside and see the whole way through.”

The Aylwards also didn’t want people congregating in the kitchen during parties, so they intentionally created spaces, both indoors and out, to attract people and serve different purposes in different scenarios. “We wanted to make use of every area in the house,” Stephen says. Ann adds: “In our old traditional house, we had sectioned-off formal spaces. Here, everything flows from one space to another and areas change with different occasions. We use the house so much. I can’t think of any room that’s wasted space.”

The home’s smart design and overall aesthetic was a true collaboration between the Aylwards and their entire design and build team, right down to the plumber, cabinetry makers and electrician. “We asked everyone to chip in ideas for the house. The air conditioning guy came up with a clever way to hide the exchanges and the electrician created a box to hide the wires from the overhead lights. Everyone was really creative and collaborative,” says Stephen.

That collaboration led to a finished home that’s exactly what Stephen and Ann had hoped for — even if they didn’t know it from the start. “They wanted something very specific, but they didn’t know how to get it,” says Schwebke. “Instead of settling, they stuck to their guns and believed they could make it all work, and they did. I just take pride in being asked to be part of the journey.”

A journey it was, but the final result was well worth the wait. “We never want to leave,” says Ann with a laugh. “I never thought I’d be a home body, but we find every reason to stay home.”

And we can see why. 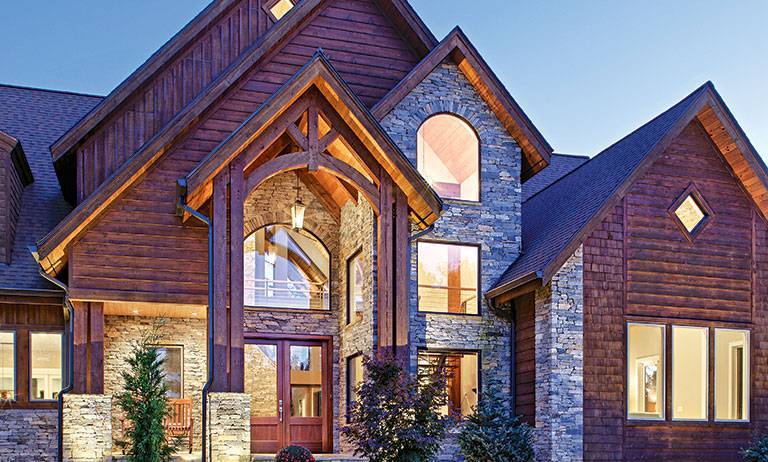 See also The Basics of a Timber Frame

The home’s kitchen adds to the contemporary feel in the house. A white marble countertop contrasts the espresso cabinets, while the windows come almost all the way down to the counters for a modern look. Coming up with the idea for the 8-by-8-foot concrete pads that lead up to the front door was a group effort. “The guy that did the grading for the land actually came up with the idea,” says Stephen.

“We started the design from the back because they knew they wanted these posts,” says Brett Schwebke. “From there, we created a mix of texture and patterns with the finishes.”

The impressive great room features 36-foot ceilings and a massive two-sided fireplace made from found Virginia fieldstone. The flooring throughout the home is durable tile that mimics the look of hard wood.

See also How to Build Your Timber House for Vacation + Retirement

“No one ever wants to leave because it’s such a relaxing space.”

See also What Are the Types of Joinery for Timber Homes?

See also The Basics of a Timber Frame