A Modern Timber Home Among the Colorado Mountains

This home achieves high marks as an engineering marvel while still honoring the simplicity of its roots.

With its angular profile, multiple shed roofs and marriage of timber, steel and glass, the Bauers’ home has distinct mountain-modern style befitting its setting in Colorado’s historic goldmine country.

Anita spearheaded the selection of interior finishes, from the lights and plumbing fixtures to the countertops, flooring and cabinetry. The kitchen also features alder cabinets, leathered granite and iron hardware. Throughout the process of choosing the design elements and architectural details, John says their philosophy was: “If not now, when? This was the time for us to make the investment so we could enjoy it.”

The home’s entrance is designed as a modern play on an old-fashioned mineshaft. Metal accents, which ground the airy space, include an iron-and-Edison-bulb chandelier, whimsical local art figures suspended from the wall and a steel cable stair rail.

Anita spearheaded the selection of interior finishes, from the lights and plumbing fixtures to the countertops, flooring and cabinetry. The kitchen also features alder cabinets, leathered granite and iron hardware. Throughout the process of choosing the design elements and architectural details, John says their philosophy was: “If not now, when? This was the time for us to make the investment so we could enjoy it.”

Both John and Anita agree their favorite features of the home are found in the great room. “There is nothing more pleasant than sitting back and looking up at the timbers,” says John. “I never tire of the beautiful wood and iron joinery coming together. It’s a far cry from a drywall ceiling.”

Anita prefers the outward views: “I call the wall of windows in my great room my framed artwork because the picture changes every day. We see storms roll in, we see the lights come on in the city below, we see bears and deer. It’s like a huge painting that transforms moment by moment.”

“Everyone told us we wouldn’t need a dining room, but we use it all the time,” says Anita. Tucked behind the kitchen in a private nook, the space feels even cozier with the addition of a gas fireplace. (The main wood-burning fireplace in the great room heats the house during the winter.) Built-in cabinetry provides extra room for holding serving dishes during large gatherings of family and friends.

Against a backdrop of creamy white walls and views of nature, alder cabinetry, Carrara marble and black matte accents create a Zen-like vibe in the master bathroom.

A stone bowl sink atop a leathered-granite countertop is just one example of the organic components found throughout the home. “We took our colors and materials from nature as much as we could,” explains Anita.

With its angular profile, multiple shed roofs and marriage of timber, steel and glass, the Bauers’ home has distinct mountain-modern style befitting its setting in Colorado’s historic goldmine country.

Written by Suzanna Logan
Photography by James Ray Spahn
It’s been more than a century since the mountains of Colorado rang out with the jubilant cry: “There’s gold in them ‘thar hills!” But when retirees John and Anita Bauer set out to find a place to put down roots a few years ago, they could all but hear the echoes when they came across a particular mountaintop lot that had once served as a former mining site.
“There were fabulous views, and where many properties had sharp drop offs, this one had a nice, open, buildable area,” explains John. As an added bonus, the site featured a 1950’s-era home that the couple could rent out until they were ready to build. For the next few years, John and Anita dreamed and planned. Then, a fire swept up the canyon, putting the Bauers’ rental in the crosshairs. “There was nothing left but a pile of smoky rubble,” says John.
Rather than lament the loss, the couple took it as their sign to kickstart the building process, and amid the ruins, found a silver lining: In a state known for its stringent building codes, the Bauers breezed through the process. “The county was eager to help homeowners get their homes finished, so we were able to skip the site plan review,” explains John.
Because the structure was classified as a rebuild on the original footprint, creativity was a must. The core showcases a shared great room and kitchen, with an intimate dining area tucked behind a fireplace wall. An elevated wing features a master suite, while a secondary guest bedroom doubles as John’s office. The lower level, which includes another bedroom, a living area with a crafting space and a wet bar, walks out to a covered patio. Anita says the flexibility of the floor plan and high-pitched ceilings make the space live larger than its 3,200 square feet, while still remaining ideal for two: “We’ve had parties of a hundred people with ease, but even with just us here, it never feels too big.” 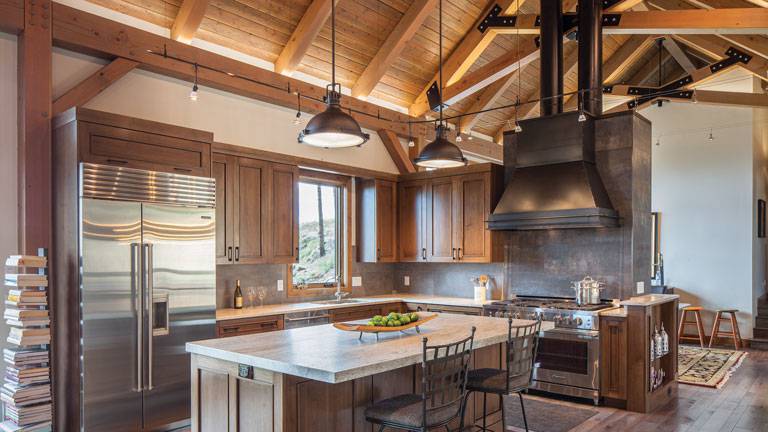 However it was the look — rather than the layout — that was the driving force behind the home’s design. “We had always been big log cabin people, but as we got to know the area’s history, we wanted something more appropriate for a mountain mining town,” says Anita. “We fell in love with the look of a big, solid timber frame and the concept of having a mine-inspired feel.”
They enlisted the help of Colorado Timberframe’s sister company, Cornerstone Homes, and Tabberson Architects to create their new family abode. “Our primary goal was to recall the mining structures that were part of the Colorado landscape a hundred years ago,” explains architect Bill Tabberson. The team began by designing a towering entrance of glass panels and steel rods reminiscent of a mineshaft. (Fittingly, the home’s foyer now sits just a few yards from the original goldmine’s tunnel.)
Next, they spanned the core of the home with mortise-and-tenon scissor trusses accentuated with decorative black-iron plates. “Our passion was to combine the raw metal and natural woods,” says Anita. Situated between the scissor bents, an oversized range hood and metal piping from a secondary fireplace in the dining room  — both finished to mimic iron — extend through the roofline to give off what John calls a “furnace-feel,” chosen to mesh with the mining aesthetic. “With every decision, we just kept moving toward our vision and held our breath that it would come together nicely,” says Anita. 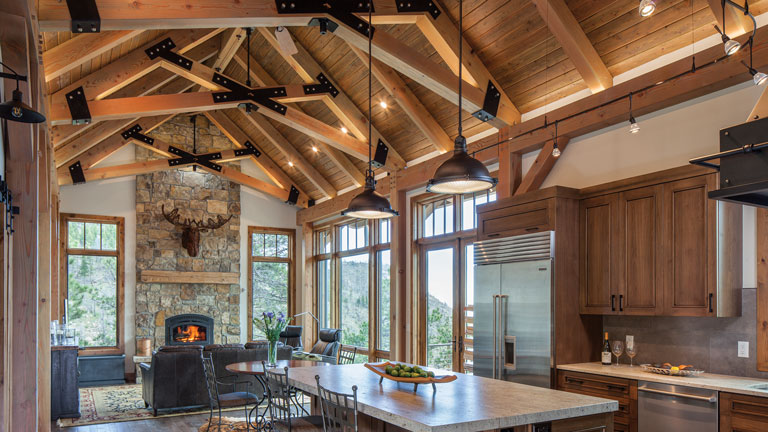 But the structure’s wins go far beyond its good looks. An engineering work of art, it can withstand wind gusts above 100 miles per hour. “The timber frame locks this house to the ground and into the side of the mountain,” says Anita. “We get hurricane-force winds, and our house doesn’t move.”
Keenan Tompkins, owner of Colorado Timberframe and Cornerstone Homes, says that structural integrity was the key focus from start to finish. “The challenge in this project was getting the wings of the house to be integrated with the main gable running through the center of the house,” he explains. “Tying the pieces of the different rooflines into the structural timber frame was tricky. It took lots and lots of design and engineering meetings to get that off the ground.”
Despite its architectural intricacies, the home stays true to its surrounding’s humble roots. “Aspects of the home are complex, but as a whole, it’s a simple, linear house,” explains Bill of his design. “I think that simplicity goes hand in hand with John and Anita’s desire to create something that feels like it was part of the land and pays homage to the area’s history.”