A gorgeous setting in southwest Colorado calls one couple home for good. 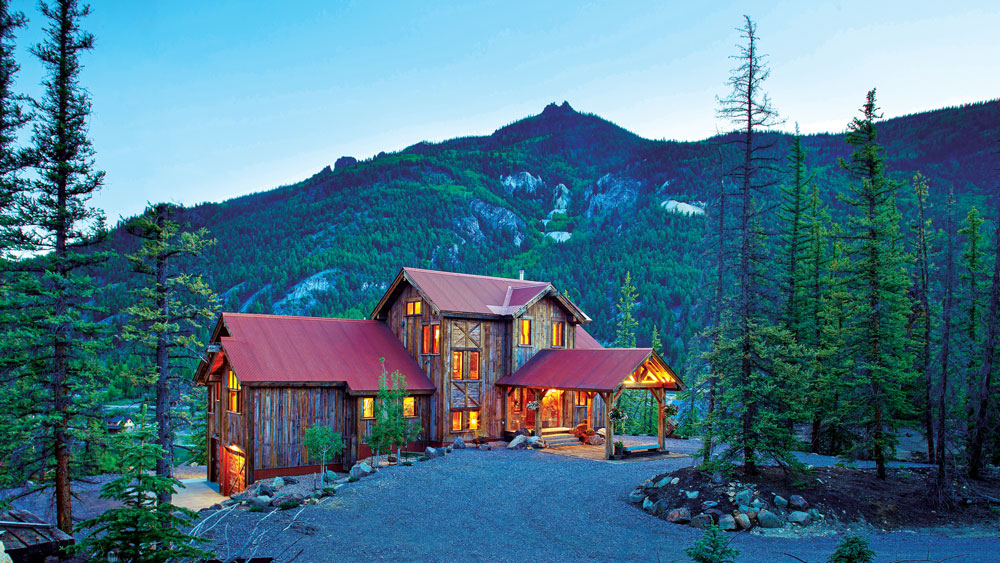 The design parameters were strict in the Bradys’ custom-home build — and that’s before you consider the challenge of the “slumgullion.” Usually used to refer to a meat, potato and vegetable stew, in this case “slumgullion” is an earthflow or slow-moving landslide. This particular slumgullion occurred 700 years ago, creating the mass of land a few miles southeast of Lake City that dammed Lake San Cristobal. To work with this issue, Bob Williams engineered the house to “float” on a slab on the slumgullion mud. The foundation is highly reinforced, says Bob, and in the event of movement, it moves as a total mass. “The Bradys’ area is on the ‘toe’ of the ancient debris flow,” Bob says. As Jeanne Brady puts it, “There’s no danger of us having lake-front property any time soon.” 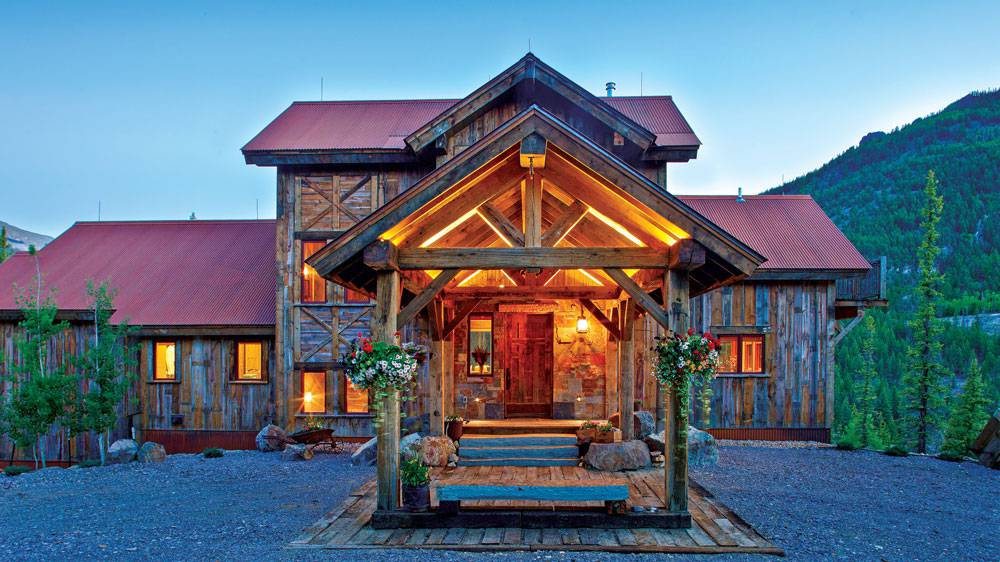 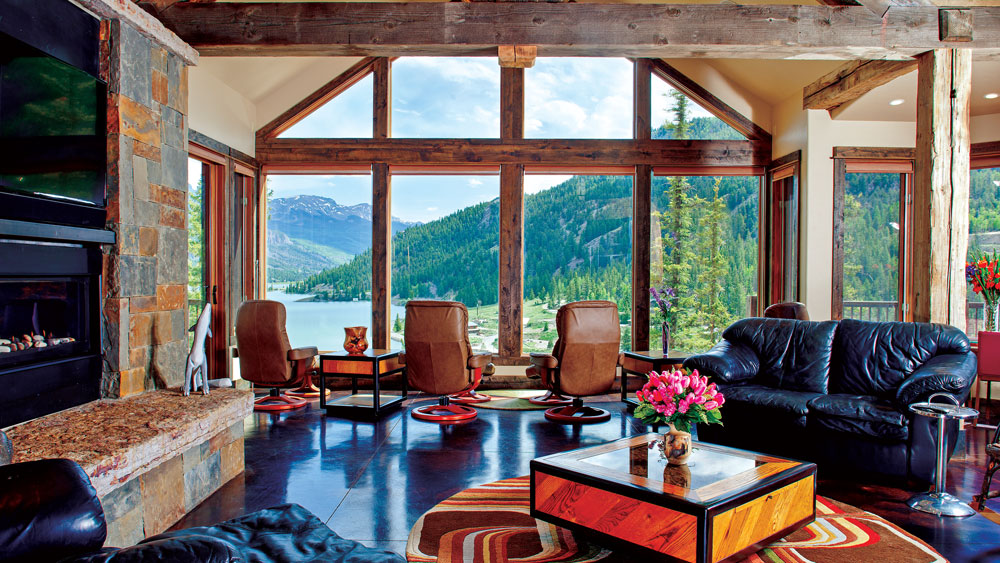 The ceiling in the great room reaches 24 feet, and the height takes advantage of the spectacular view of Lake San Cristobal and the surrounding mountains. Pike Builders created custom “Old World” joinery for the beams and trusses, all of which are structural timbers. 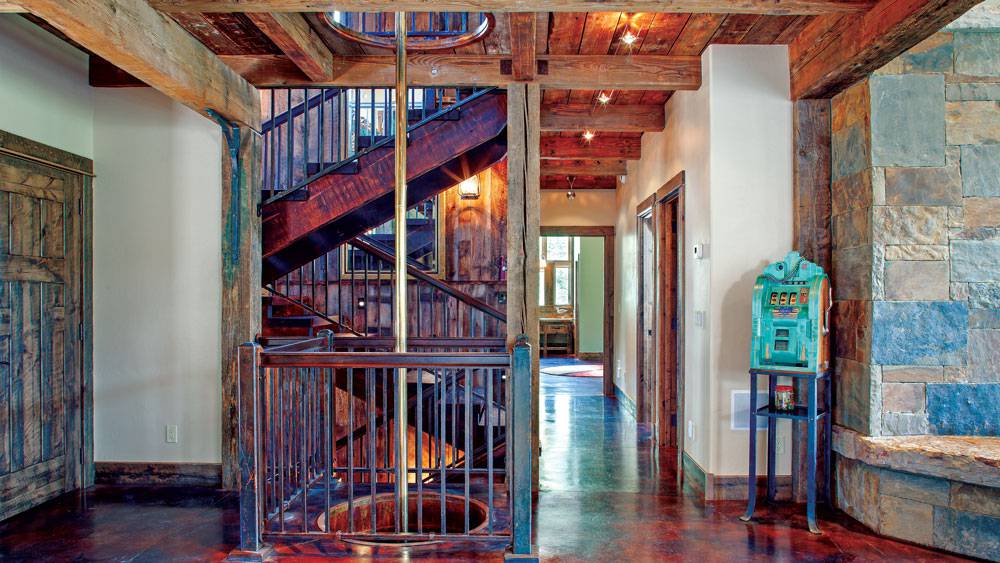 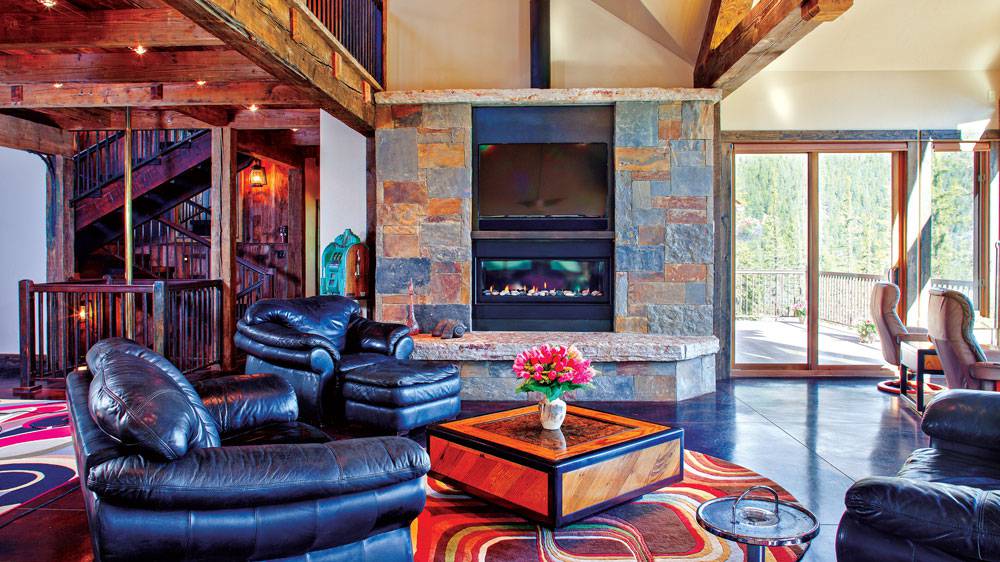 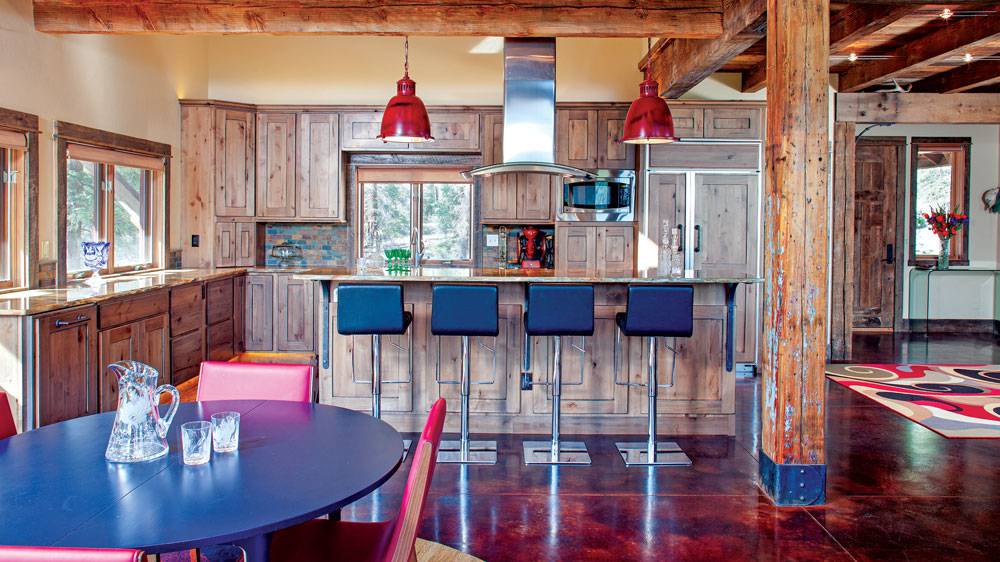 Surrounded by windows, the kitchen sits under a catwalk that runs past the man cave and out to a deck. The cabinets were custom made by John Welch of Colorado Custom Cabinets. Task and ambient lighting use smart technology and can all be controlled from various spots in the house. 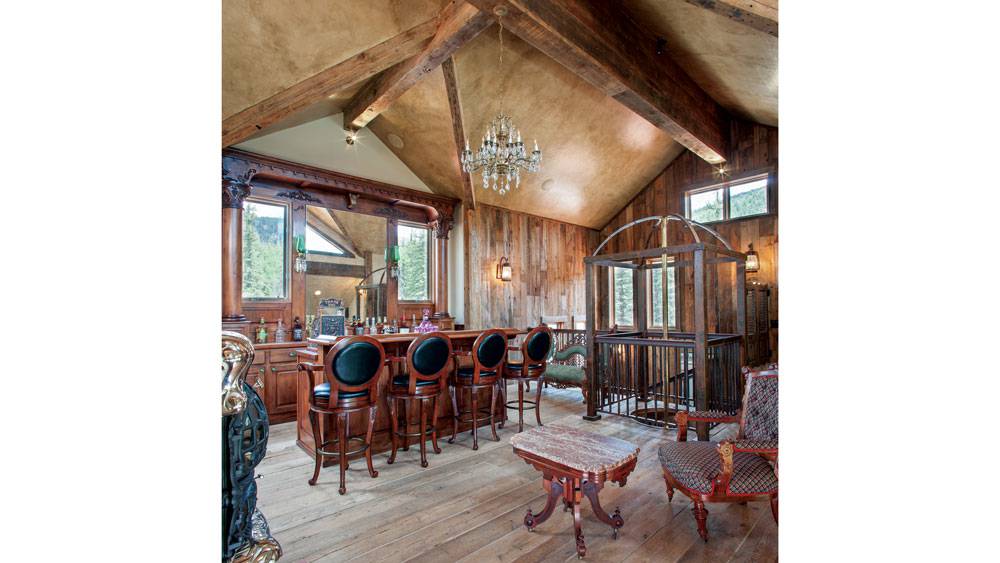 In Tom’s man cave, Pike Builders faux-painted the ceiling to have a smoky patina. 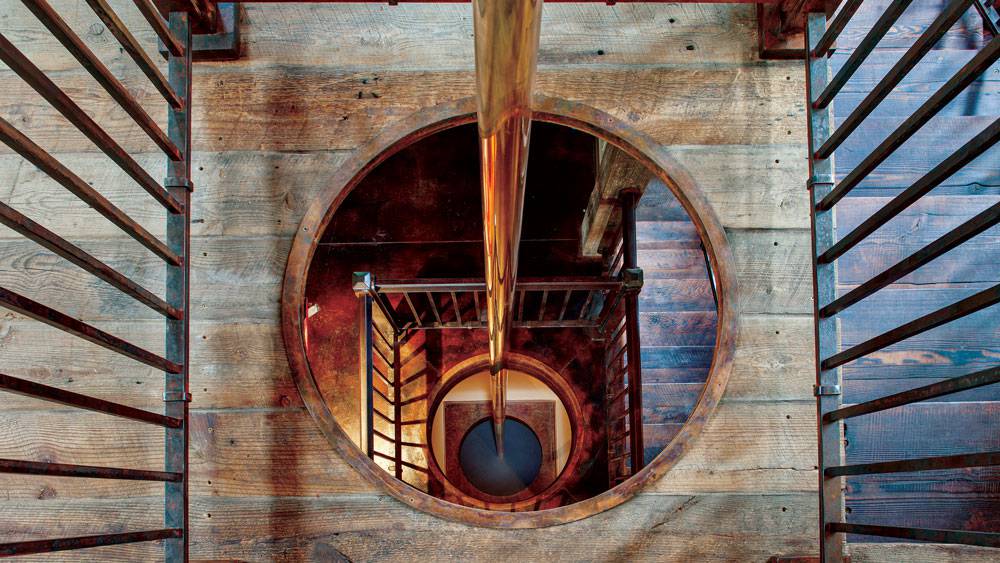 The brass fireman’s pole spans three floors from the upper level through the main floor and on to the basement.  The handrails around the fireman’s pole are made from narrow gauge ore cart rails from the old mines. 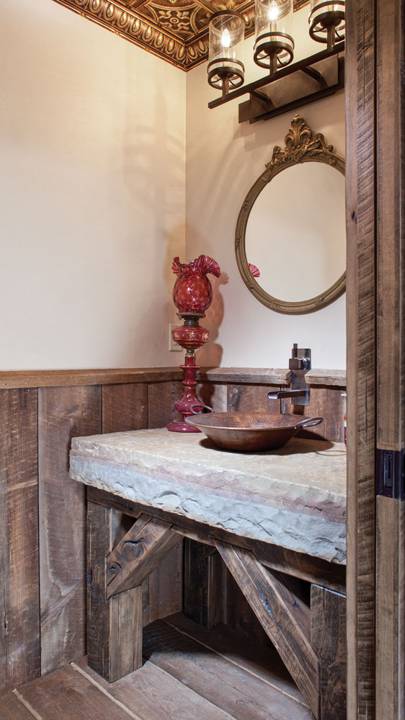 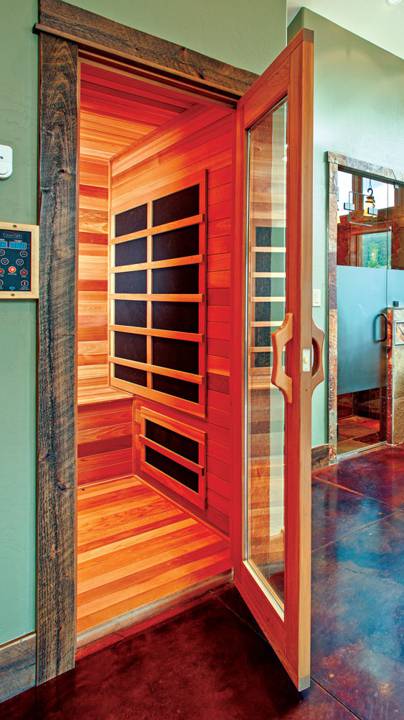 The master bathroom includes a sauna and a steam shower. 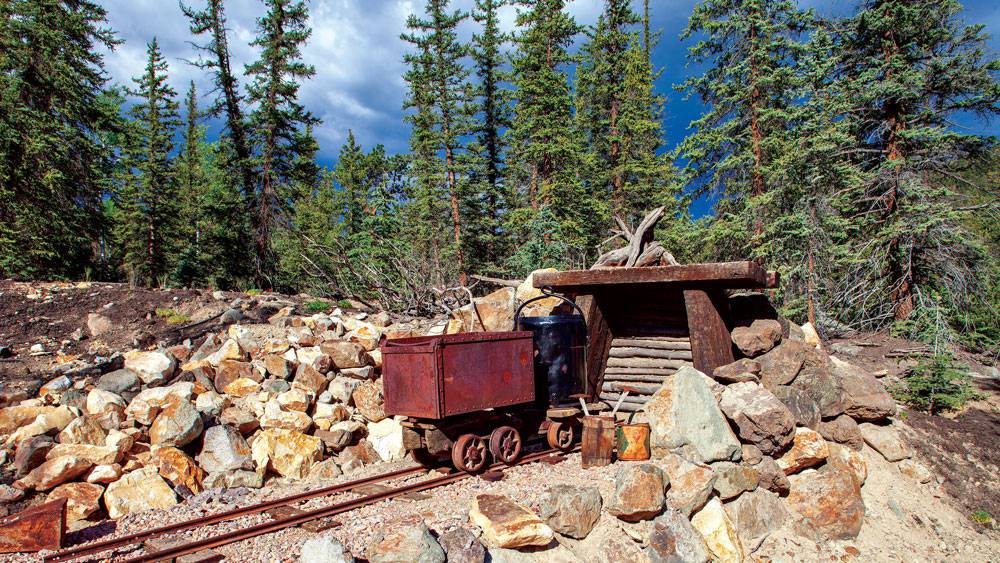 When your site is rocky and your home replicates an old mining camp, a mine trolley just makes sense.

The design parameters were strict in the Bradys’ custom-home build — and that’s before you consider the challenge of the “slumgullion.” Usually used to refer to a meat, potato and vegetable stew, in this case “slumgullion” is an earthflow or slow-moving landslide. This particular slumgullion occurred 700 years ago, creating the mass of land a few miles southeast of Lake City that dammed Lake San Cristobal. To work with this issue, Bob Williams engineered the house to “float” on a slab on the slumgullion mud. The foundation is highly reinforced, says Bob, and in the event of movement, it moves as a total mass. “The Bradys’ area is on the ‘toe’ of the ancient debris flow,” Bob says. As Jeanne Brady puts it, “There’s no danger of us having lake-front property any time soon.”

Written by Stacey Freed
Photography by James Ray Spahn
Majestic views come with the territory when you fly planes for a living. For pilot Tom Brady and his wife Jeanne, that holds true even in retirement. From the living room of their custom timber home near Lake City in Colorado’s San Juan Mountains, the Bradys can enjoy the wide valley bisected by Lake San Cristobal, fir covered hillsides and snowy peaks. But getting that vista — and a home worthy of it — took nearly a decade of hard work and planning.

After the couple married more than 40 years ago, they moved to Texas from their native Colorado, but still spent their vacations in those beloved San Juan Mountains. “Every fall we’d come to Lake City before hunting season to watch the Aspens change,” says Jeanne. It wasn’t until 2004 that they decided to put down roots back where they first met, and bought property on which to build their forever home. The only problem: There was no way to get to their land. “You could hike to it, but there was no road,” Tom explains.
To remedy the situation, they found Bob Williams, principle of Williams Engineering in Gunnison, Colorado, who helped them with the road and the design. “I looked at the site and said, ‘There’s only one place to build — on top of the site,’” Bob says. It took four years to get permits from the Bureau of Land Management, the Forestry Service and various neighbors, but the road was completed in 2010. The next year was spent finding the right builder. Finally, in November 2011, Pike Builders broke ground, but it would take nearly three more years to finish the project.

“The design was driven by a few major elements,” Bob says. First, the Bradys wanted to bring the outside in. “The heart of the home is the view south toward the Continental Divide, and it’s probably the most beautiful view from a house I’ve ever seen,” he says. To capture that view, Tom wanted a place he described as a “fishbowl with a front door.” To accomplish this, the framework for everything became the wall of windows in the living room.
The other important view is of Uncompahgre Peak, one of the highest summits in the Rockies at 14,321 feet. “To grab that view, we put a catwalk over the kitchen that leads to a deck outside,” Bob shares.
General contractors Steve Pike and his brother, Paul, who was the project’s main GC, were able to navigate Bob’s intricate design, but had more of a challenge sourcing products that were made in the U.S.A. — a top priority for the Bradys. “From the light bulbs, to the screws in any fixture, to the glass in the windows — everything is American made. That was a massive undertaking and part of the reason why it took three years to build this house,” Steve says.
But this attention to detail has made the structure as spectacular as its view. The Bradys wanted the house to blend into its surroundings and appear as if it were an old mining camp, so the 4,600-square-foot, three-level home was built with eastern white pine, reclaimed from an old tobacco plantation in North Carolina. “The pieces were not refurbished,” Steve says. “It’s all in its original state.” All the timbers are structural, and the Pike brothers design what Steve calls “intriguing joinery,” so each home has its own style.

The highlight of the main level’s open plan may be the view through the window wall, but the exposed wooden beams and dark leather furniture allow the living room, dining room and kitchen to hold their own — the warm, comfortable feeling is “the opposite of formal,” according to Tom.
Upstairs, a 700-square-foot man cave is bordered by a railing as if it’s a balcony in a frontier saloon. “I wanted it like a bordello, almost tacky,” Tom says with a laugh, “with a chandelier, lanterns and lamps with flickering flame lights.” The ceiling was faux painted to look as if it had seen its share of wood and tobacco smoke. And, of course, there’s the fireman’s pole. For safety’s sake, the team designed and built a cage around the pole to look like an old jail cell.
Now full-time residents of the small town of Lake City, the Bradys enjoy hiking, cross-country skiing and exploring the old mines. Jeanne does genealogy research on her
Swedish heritage, and Tom is happy not to be away from home 20 days of every month. “Now, traveling is driving 12 minutes to town, going to the coffee shop and listening to the local gossip,” he says. “I don’t have to go through TSA when I strap on my skis and no one pats me down when I walk out the door to go fishing.”

“Dorothy had it right,” Jeanne adds. “There is no place like home.” 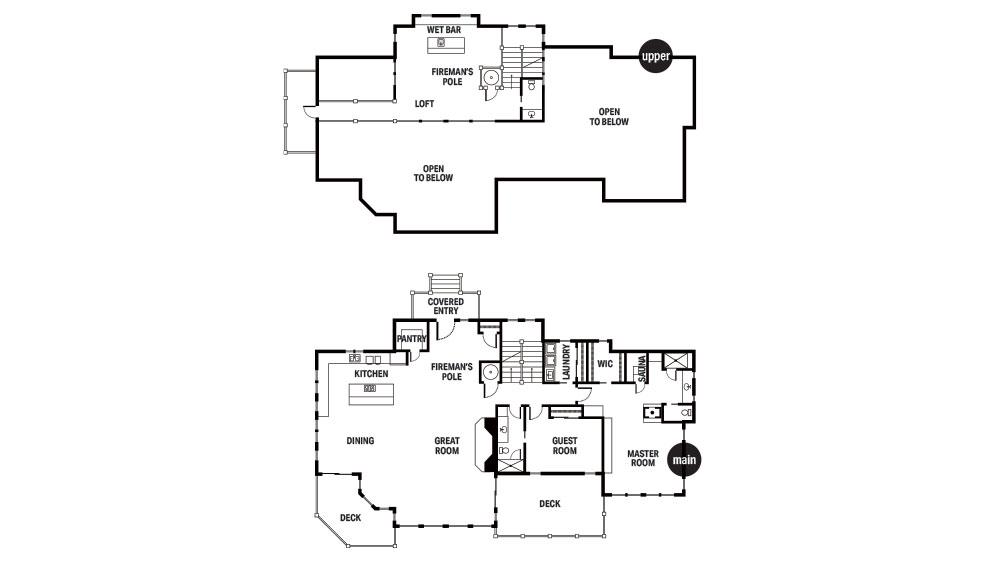